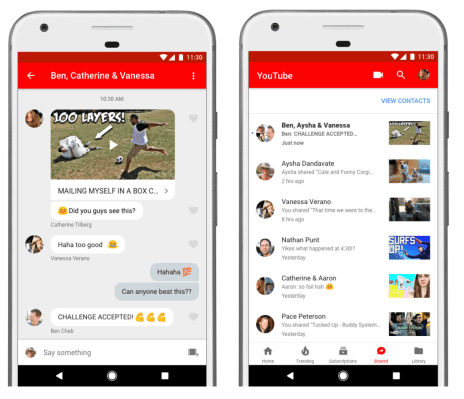 People love to share YouTubevideos among their friends, which is why in mid-2017 YouTube launched a new in-app messaging feature that would allow YouTube users to private send their friends videos and chat within a dedicated tab in the YouTube mobile app. That feature is now being shut down, the company says. After September 18, the ability to direct message friends on YouTube itself will be removed.

The change was first spotted by 9to5Google, which noted that YouTube Messages came to the web in May of last year.

YouTube, in its announcement about the closure, doesn’t offer much insight into its decision.

While the company says that its more recent work has been focused on public conversations with updates to comments, posts, and Stories, it doesn’t explain why Messages is no longer a priority.

A likely reason, of course, is that the feature was under-utilized. Most people today are heavily invested in their own preferred messaging apps — whether that’s Messenger, WhatsApp, WeChat, iMessage or others.

However, based on the nearly 500 angry comments replying to Google’s post about the closure, it seems that YouTube Messages may have been preferred by many young users.

A sizable number of commenters are complaining that YouTube was the “only place” they could message their friends because they didn’t have a phone or weren’t allowed to give out their phone number.

Some said they used the feature to “talk to their mom” or because they weren’t allowed to use social media.

It appears that many children had been using YouTube Messages as a sort of workaround to their parents’ block on messaging apps on their own phones, or as a way to communicate from their tablets or via web, likely without parents’ knowledge.

That’s not a good look for YouTube at this time, given its issues around inappropriate videos aimed at children, child exploitation, child predators, and regulatory issues.

The video platform in February came under fire for putting kids at risk of child predators. The company had to shut off comments on videos featuring minors, after the discovery of a pedophile ring that had been communicating via YouTube’s comments section.

Notably, the FTC is also now following up on complaints about YouTube’s possible violations of COPPA, a U.S. Children’s Privacy law. Child advocacy and consumers groups complain that YouTube has lured children under 13 into its digital playground, where it collects their data and targets them with ads, without parental consent.

Though some people may have used YouTube Messages to promote their channel or to share videos with family members and friends, it’s clear this usage hadn’t gone mainstream. Otherwise, YouTube wouldn’t be walking away from a popular product.

The feature also had issues with spam — much like Google+ did —  as there were unwelcome requests from strangers, at times.

Edward Snowden says Facebook is just as untrustworthy as the NSA

The best, most secure and prettiest laptop bags