World leaders have gathered in France for the G7 summit, a meeting that European Council President Donald Tusk said will be a “difficult test of unity and solidarity” due to deep divisions over a range of issues including trade and climate change.

The annual gathering of the G7 nations, some of the world’s key industrial countries, kicked off on Saturday in the French coastal town of Biarritz.

Thousands of anti-G7 protesters rallied in the nearby town of Hendaye as the leaders from Britain, Canada, Germany, Italy, Japan and the United States descended on Biarritz.

The three-day summit is taking place against the backdrop of an escalating trade war between the US and China, Britain’s impending exit from the European Union, growing tensions between the US and Iran over Tehran’s nuclear programme and global concern over fires ravaging the Amazon rainforest in Brazil.

Speaking before the summit, Tusk appealed for unity.

“It is increasingly difficult, for all of us, to find common language and the world needs more of our cooperation, not less,” he said.

“This may be the last moment to restore our political community.”

French President Emmanuel Macron, the host of this year’s summit, said he wants the heads of G7 nations to focus on the defence of democracy, gender equality, education and the environment. He also invited Asian, African and Latin American leaders to join them for a global push on these issues.

In a televised speech before the summit, Macron said he hoped to find common ground with US President Donald Trump, who acrimoniously ended last year’s G7 meeting in Canada, leaving the gathering and rejecting the final communique, an agreed-upon statement released by all members.

Shortly after Trump’s arrival, Macron hosted the US leader for a two-hour unscheduled lunch.

“So far, so good,” Trump told reporters, hailing his friendship with Macron. “We’ll accomplish a lot this weekend and I look forward to it.”

Macron listed foreign policy issues the two would address, including Libya, Syria and North Korea, adding that they shared the same objective of preventing Iran from obtaining nuclear weapons.

Al Jazeera’s James Bays, reporting from Biarritz, said the working lunch was an attempt by Macron to get Trump “on the same page”.

“President Macron has seen what’s happened at previous G7 summits. He’s seen what President Trump can do,” he said.

Another reason could be the trade dispute between France and the US, said Bays.

Hours before leaving for Biarritz, Trump had lashed out at France for what he said were “unfair” taxes on US tech companies like Google and Amazon, and threatened to tax French wine “like they’ve never seen before”.

France currently imposes a three percent tax on digital revenues of large Internet-based firms and Macron plans to defend a proposal for a global tax law on big tech at the summit. 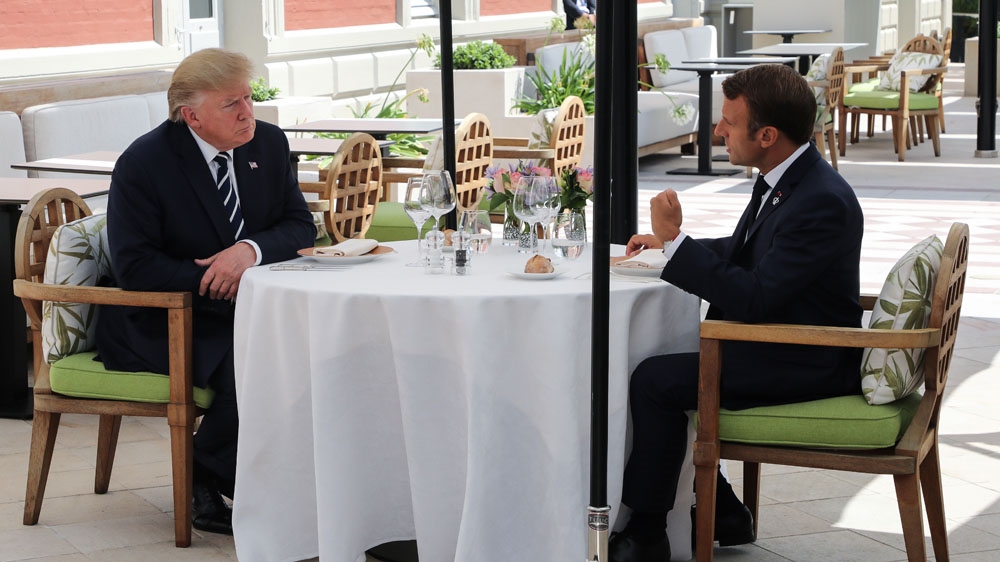 US President Donald Trump, left, sits to lunch with French President Emmanuel Macron on the first day of the annual G7 summit [Marin Ludovic/Pool via Reuters]

Trump also upped his trade fight with China by raising retaliatory tariffs and ordering US companies to consider alternatives to doing business there.

China’s President Xi Jinping is not among the Asian leaders invited to Biarritz. China said on Saturday it strongly opposed Trump’s decision to levy additional tariffs on $550bn worth of Chinese goods and warned the US of consequences if it did not end its “wrong actions”.

Attention will also be on Boris Johnson, who will be making his G7 debut as the prime minister of Britain. Johnson is facing pressure to pull Britain out of the EU, the country’s largest trading partner, and it will need to replace that market with something else. So Britain is looking to the US.

As he arrived in France, Johnson said that global trade, the environment and women’s education will be his “three obsessions” over the days of meetings.

“Trade wars, talk of recession, Brexit, it’s all a very depressing economic picture,” said Al Jazeera’s Bays. “One thing that could bolster the markets is unity from this summit. But don’t expect that. France has already said it is not even seeking a joint communique. This is a meeting for discussions, but it is very unlikely to have any decisions.”

Meanwhile, an estimated 9,000 protesters converged on Hendaye, about 35km fromBiarritz, to demand accountability on various issues including the environment, globalisation, gay rights, Palestinian rights and independence for the Basque region in Spain.

Representatives from the more-local “yellow vest” movement, which began in France in November 2018 with mass demonstrations over government taxes on fuel, were also out in force to protest inequality.

“The top capitalist leaders are here and we have to show them that the fight continues,” Alain Missana, 48, an electrician wearing a yellow vest, told the Reuters news agency.

“It’s more money for the rich and nothing for the poor. We see the Amazonian forests burning and the arctic melting. The leaders will hear us,” he said. 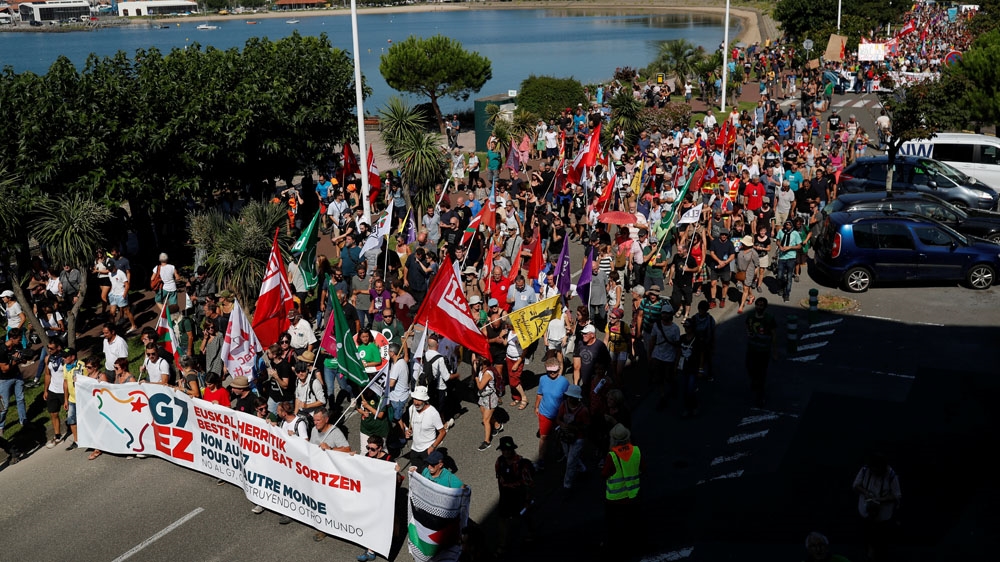 In the French town of Bayonne, police fired water cannons and tear gas at about 400 anti-capitalist protesters after some members of the group threw stones early Saturday evening. Besides that incident, the protests had been mostly peaceful.