Islamabad, Pakistan – Pakistan’s Prime Minister Imran Khan’s visit to Iran and Saudi Arabia to help facilitate talks between the regional rivals has ended with no set commitments for dialogue although Tehran reiterated its readiness to come to the negotiating table.

This followed a trip over the weekend to the Iranian capital Tehran to meet Iranian President Hassan Rouhani and Supreme Leader Ali Khamenei.

At a joint press conference on Sunday, Rouhani reiterated an Iranian desire to resolve issues in the region through dialogue, despite a flare-up of violence targeting oil facilities in both Iran and Saudi Arabia. Both governments blame each other for the attacks.

Following Rouhani’s comments, Khan reiterated his government’s desire to resolve any possible conflict between Iran – with whom Pakistan shares an 800km border – and Saudi Arabia, a key strategic ally to Islamabad.

“Iran is our neighbour. Ties with Iran go a long way back,” said the Pakistan PM.

“Saudi Arabia has been one of our closest friends. Saudi Arabia has helped us when we have been in need. The reason for this trip is that we do not want a conflict between Saudi Arabia and Iran. We recognise that it is a complex issue.”

Saudi Arabia is a major Pakistani strategic ally, helping to bolster the country’s foreign exchange reserves earlier this year with interest free loans, and announcing more than $20bn in new investments in the South Asian country during a high-level visit.

Pakistan is also home to a Shia Muslim minority of roughly 20 percent of its 207 million population. Shia Muslims form the vast majority of the population in Iran.

Khan offered the use of the Pakistani capital, Islamabad, as a neutral venue for Saudi and Iranian leaders to meet to “iron out [their] differences”. 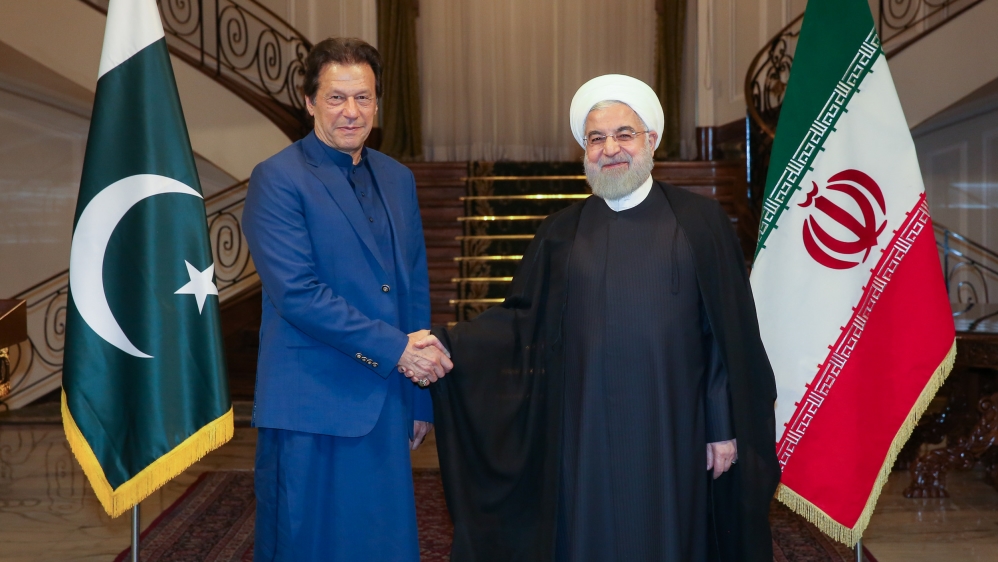 “During the meeting, [Khan and MBS] reviewed strong ties between the two brotherly countries and fields of joint cooperation as well as ways of enhancing them,” read the government statement.

“They also discussed the latest developments in the region and a number of issues of common interest.”

A Pakistani statement on the meeting with Saudi King Salman bin Abdul Aziz said PM Khan “stressed the need to resolve regional peace and stability differences and disputes through political means and diplomacy”.

On Tuesday, Iranian Foreign Minister Javad Zarif accused “one or more governments” of being involved in last week’s attack on an Iranian oil tanker.

While responsibility for the attacks was claimed by Houthi rebels who are battling Saudi forces in Yemen, the Kingdom blamed Iran for the attacks, prompting the United States to tighten sanctions on the country.

Tensions in the region have been at fever-pitch since the attacks, with the US backing Saudi Arabia’s accusations of Iran being responsible for the attacks, and Iran warning of “all-out war” if its territory was attacked.

Following the United Nations General Assembly in New York last month, Khan offered to help mediate between the two regional powers, who have also been battling each other through proxies in Syria, Iraq and Yemen.

Analysts warn that Pakistan’s traditionally friendly ties with both countries may not be enough to bring them to the table.

Zahid Hussain, an Islamabad-based security analyst, said to expect Khan’s meetings to lead to talks “is too much”.

“It is important [for Pakistan to do] but I doubt very much that anything substantive will come out from Pakistan’s effort to facilitate talks between them,” he told.

“Conflicts between the two countries go much deeper. [The conflicts] are not on some minor issues, [that] have just arisen. It has been there for a very, very long time, and both countries are deeply involved in conflicts in the Middle East. So for Pakistan getting them together may not work.”

Hussain feels the task may be beyond the expectations set by Khan.

“Khan has developed this kind of illusion about himself that he can now play a much greater role in uniting the Muslim ummah [community], but he doesn’t realise that the Muslim ummah is so divided and fractured, with nothing to unite them.”

Others, however, believe Pakistan stands to gain from stepping into the mediation talks by reinforcing its neutrality on disputes between the two countries.

“The role of mediation reinforces Pakistan’s neutrality, which is positive for Pakistan,” said Hassan Akbar, an Islamabad-based foreign policy analyst. “It allows Pakistan to sidestep the inevitable question of choosing sides.”

The role of mediation reinforces Pakistan’s neutrality, which is positive for Pakistan

Akbar believes it is unlikely that Pakistan would be able to allay Saudi Arabian strategic concerns about Iran – particularly regarding its nuclear capabilities – but that entering into a mediating role provides a path through which immediate tensions can be defused.

James Dorsey, a senior fellow at the Singapore-based S. Rajaratnam School of International Studies and a seasoned journalist who has covered the region for decades, said Iran’s position is to try and push the region to the brink of a conflict that neither side wants in order to secure talks.

“The only way to break the circle … is to raise the stakes to the point where you either go to war or you talk,” Dorsey said. “That is the Iranian strategy and that’s also the risk factor.”

Dorsey argued that even though Pakistan has “zilch” leverage over Iran or Saudi Arabia, it makes sense for it to pursue peace talks as a way to bolster its own position of neutrality and relations with each side individually.

“Fundamentally, I think at this point there is more in this for Pakistan than for the Saudi-Iranian dispute,” he said.

This Is How Birds See The World As Compared To Humans

John Bolton is out: Where does that leave US foreign policy?

As President Xi did, Imran says he wants to put 500 corrupt people behind bars