Candidates must secure 50 percent of the vote to win on Sunday, but if no single candidate obtains a majority, the two candidates with the most votes will advance to a second, decisive round.

Here are some of the main contenders:

As prime minister since 2016, Youssef Chahed has made a series of tough public spending cuts through an International Monetary Fund (IMF) loan programme aimed at reducing Tunisia’s large public debt.

The former agricultural engineer said his coalition government pulled Tunisia back from the brink of economic disaster, but critics in the unions and elsewhere say spending cuts weakened the economy and hurt the poor.

A former member of the late president’s Nidaa Tounes party, Chahed quarrelled with Essebsi’s son and was expelled, prompting him to form his own party in January 2019.

This summer he revealed that, like many other Tunisians, he too had French nationality, but said he had now renounced it. 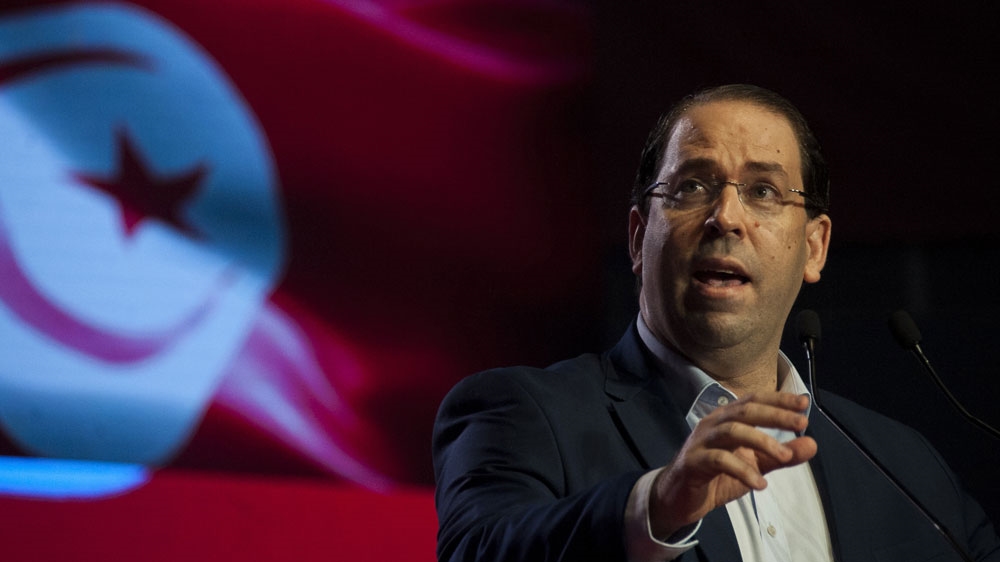 Chahed, an engineer, has made a series of unpopular public spending cuts [Hassene Dridi/AP Photo]

The businessman and media mogul was indicted in July and arrested just weeks before the first round of the poll on charges of money laundering.

But the 56-year-old was given the greenlight to run and has hit the campaign trail by proxy, deploying his wife and activists from his Qalb Tounes (Heart of Tunisia) party to woo voters.

In recent years, Nabil Karoui has used his popular television channel Nessma to launch high-profile charity campaigns, appearing often in designer suits as he travelled across the country to meet some of its poorest.

“It has helped me get closer to people and realise the huge social problems facing the country. I have been touched by it,” he once told AFP news agency. 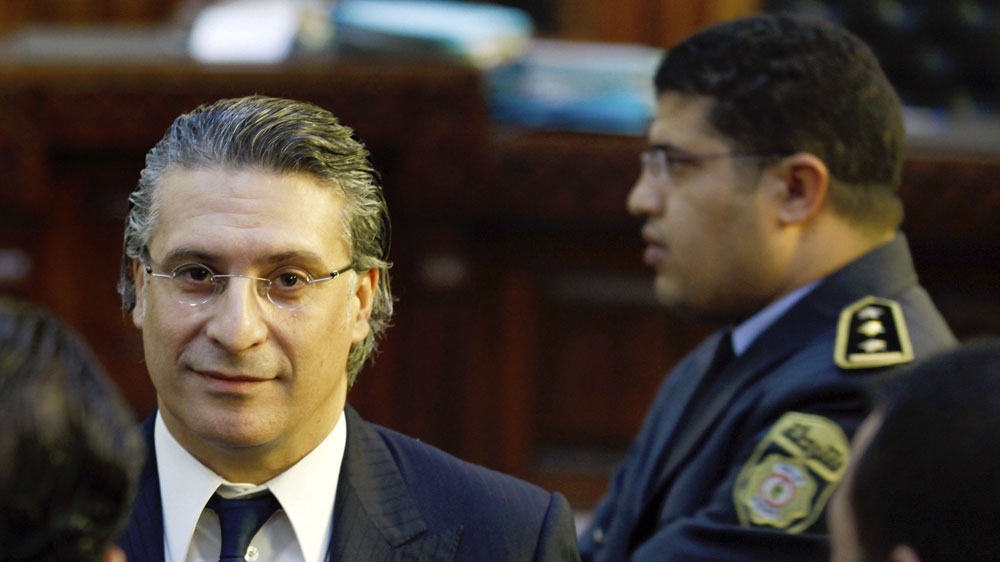 The 71-year-old was one of the founders of the moderate Islamist Ennahdha party, banned for decades before the 2011 revolution, and is now its first candidate for the presidency.

A lawyer, Abdelfattach Mourou has distanced himself from the party’s more socially conservative positions and left it in 1991 after it failed to clearly condemn an attack on a bureau of the then ruling party.

He rejoined the party after the 2011 revolution and his secular critics say his position as a moderate in the party, along with his humour and traditional dress, disguise more conservative beliefs.

Ennahdha has been in several coalition governments since the revolution and its focus appears still to be more on the October 6 parliament election, in which its leader Rached Ghannouchi is standing, than the presidency.

However, Mourou can count on a solid chunk of voters who have backed Ennahdha in elections since the revolution while the secular parties have constantly reformed themselves under different leaders and names. 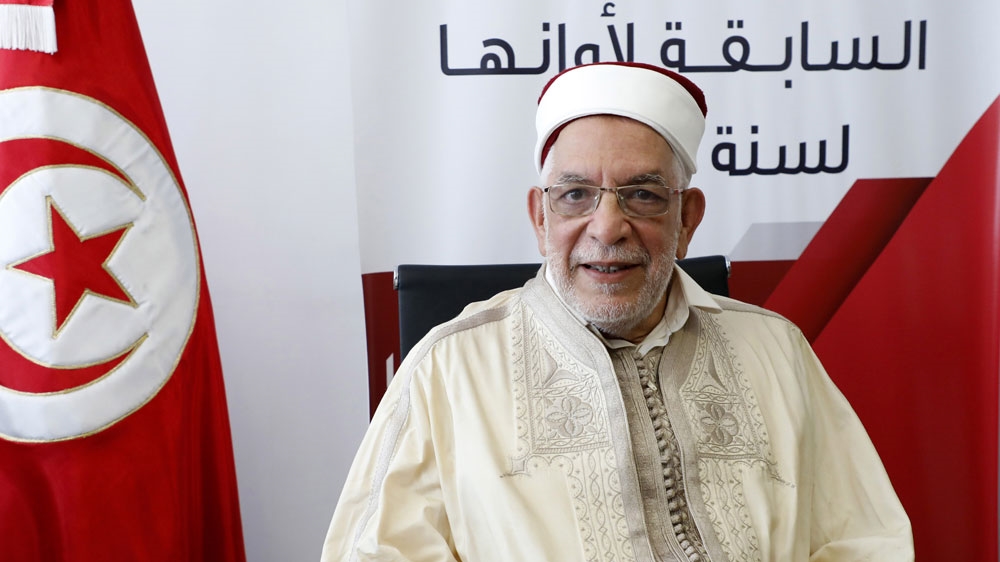 Defence Minister Abdelkarim Zbidi, 69, presents himself as being above party politics and infighting that he says have held back economic reforms in recent years. He said he will change the constitution to resolve the deadlock between the presidency and parliament.

Zbidi has served as defence minister twice since 2011, first in a cabinet led by the Islamists of Ennahdha and later under Chahed.

A close friend of the late Essebsi, he enjoys the support of secular parties including Nidaa Tounes. 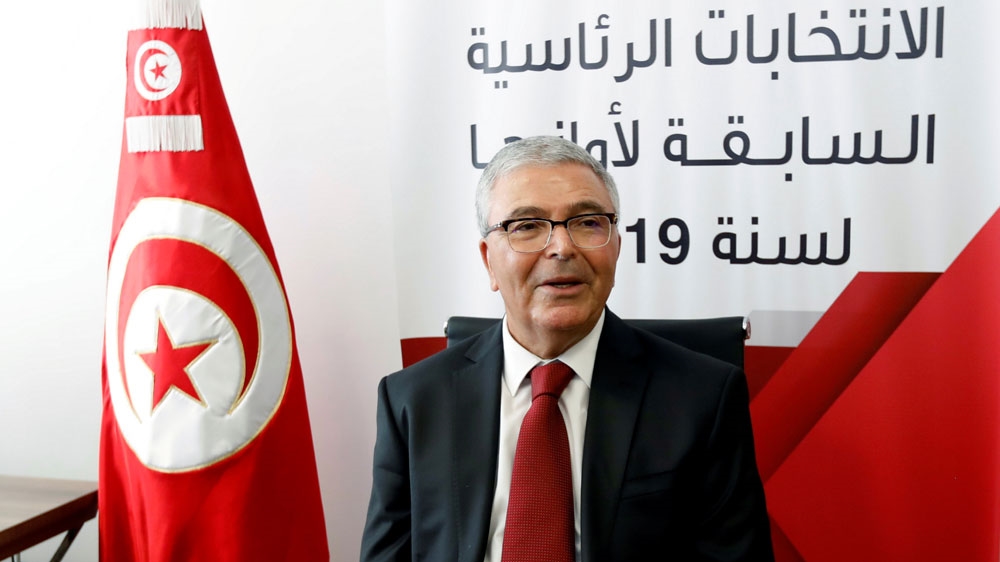 A veteran opponent of dictatorship, Moncef Marzouki was installed as president by Ennahdha after the 2011 revolution and oversaw Tunisia’s transition to democracy.

But his controversial alliance with Ennahdha clouded the 74-year-old neurologist’s reputation. In 2014, he ran against Essebsi in the North African country’s first democratic elections, but lost out. 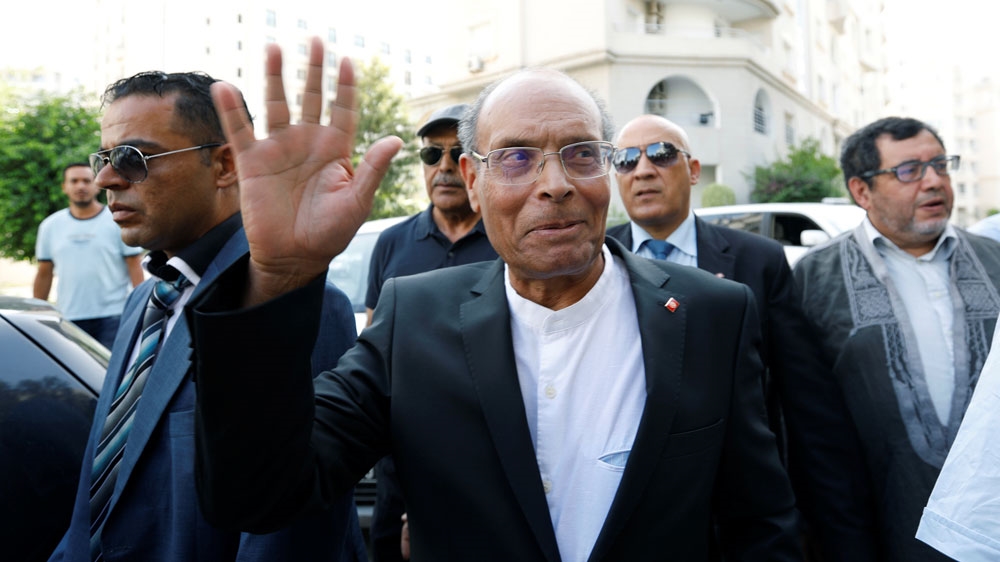 A veteran opponent of dictatorship, Marzouki was installed as president by Ennahdha after the 2011 revolution [Zoubeir Souissi/Reuters]

As a lawyer, Mohamed Abbou defended the rights of political prisoners held under longtime ruler Zine El Abidine Ben Ali and was himself imprisoned for two years during the deposed dictator’s rule.

He served as minister in the first post-revolution cabinet but resigned a few months later to protest what he claimed were obstacles hampering the fight against corruption.

Abbou, who heads the Attayar party, has been campaigning against what he calls “dirty money”. 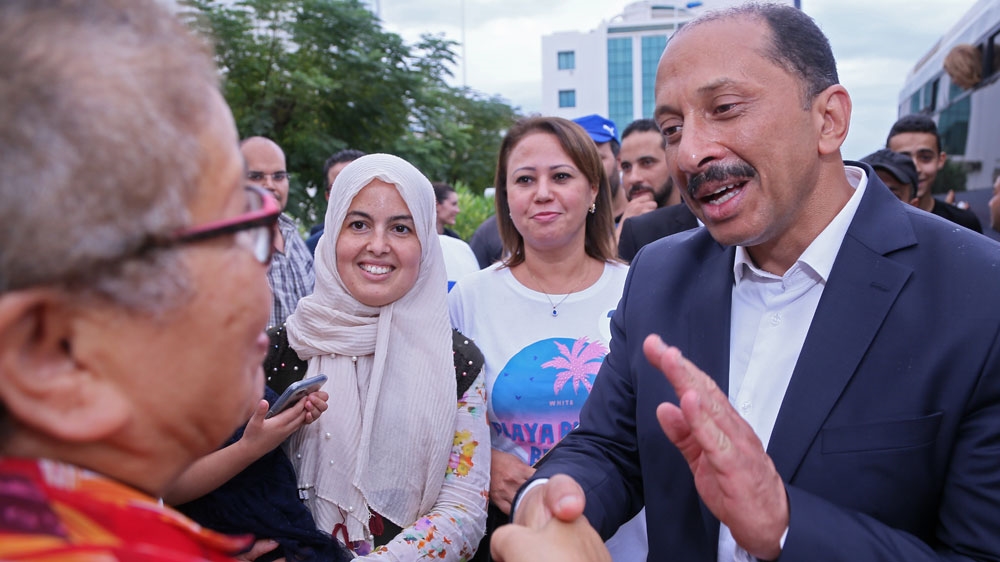 Mehdi Jomaa is an engineer by training. He entered the political arena following the 2011 Arab Spring uprising after years of living abroad, mostly in France where he worked for Hutchinson, a subsidiary of French energy giant Total.

The 57-year-old served as minister of industry in 2013. A year later, he became prime minister heading up a cabinet of technocrats following a deep political crisis that threatened the country’s nascent democracy.

In 2017, he set up his own political party, Al Badil Ettounsi (Tunisian Alternative). 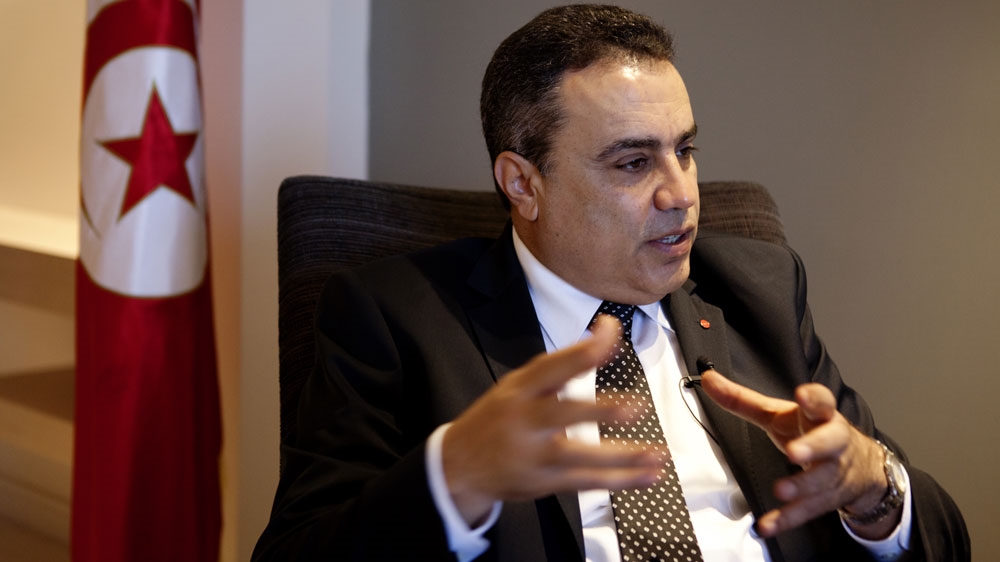 A technocrat, Jomaa replaced an Ennahda-led cabinet during a period of polarisation between secularists and Ennahda [Jane Hahn/AP]

A champion of former ruler Ben Ali’s government, the 45-year-old lawyer defended the toppled president’s Democratic Constitutional Rally (RCD) party during the trial for its dissolution after the revolution.

Abir Moussi, one of the two women candidates in the running, is a passionate opponent of Islamist parties and now heads the Free Destourian party, a group formed from remnants of Ben Ali’s RCD.

Supporters describe her as a brave woman of principles while her critics say her political views are divisive. 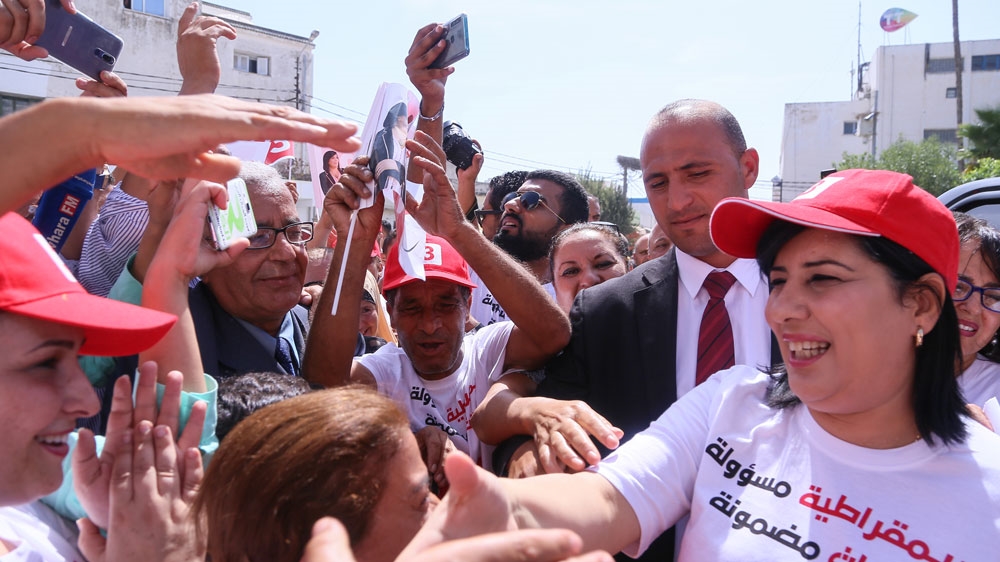 Nicknamed “Robocop” because of his abrupt, staccato speech, Kais Said has scored well in recent opinion polls although pundits say they are unable to explain the rise of this newcomer to politics.

The 61-year-old law professor is an expert on constitutional affairs.

Said has no partisan support and has not organised any political meetings. Instead, he has gone door-to-door to meet voters to explain his policies, which are rather conservative. 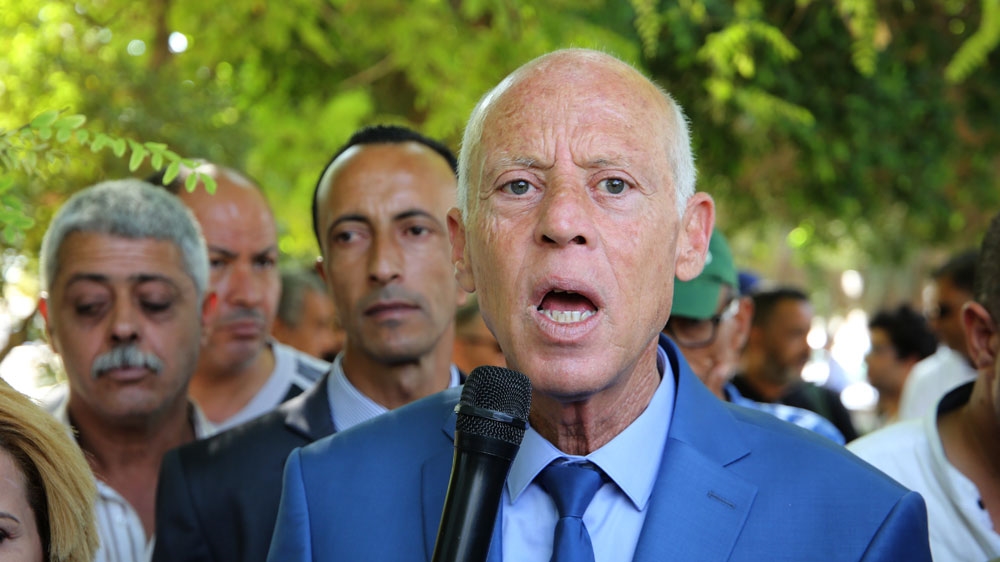 Zimbabwe’s former president Mugabe left behind $10m but no will