Jambi, Indonesia –In an emergency clinic in the south of the Indonesian island of Sumatra, three-year-old Rafael has a cough and a fever.

The boy’s oxygen levels are so low he can barely raise his head from the gurney.

All he can do is lie still and wait for oxygen; his mother waiting anxiously at his side.

Parts of Indonesia have been ablaze since July as plantation owners burn land that is no longer considered productive to prepare it for replanting in the coming season or to turn jungle into plantation, sending plumes of choking smoke into the air.

The islands of Sumatra and Kalimantan have been the worst affected by what’s known as the haze, but is really a toxic smog made up of microscopic particles, including soot and tar, and chemicals like cyanide and carbon monoxide.

With the fires still raging the cloud of pollution spread across Malaysia and Singapore this month, affecting millions more people. 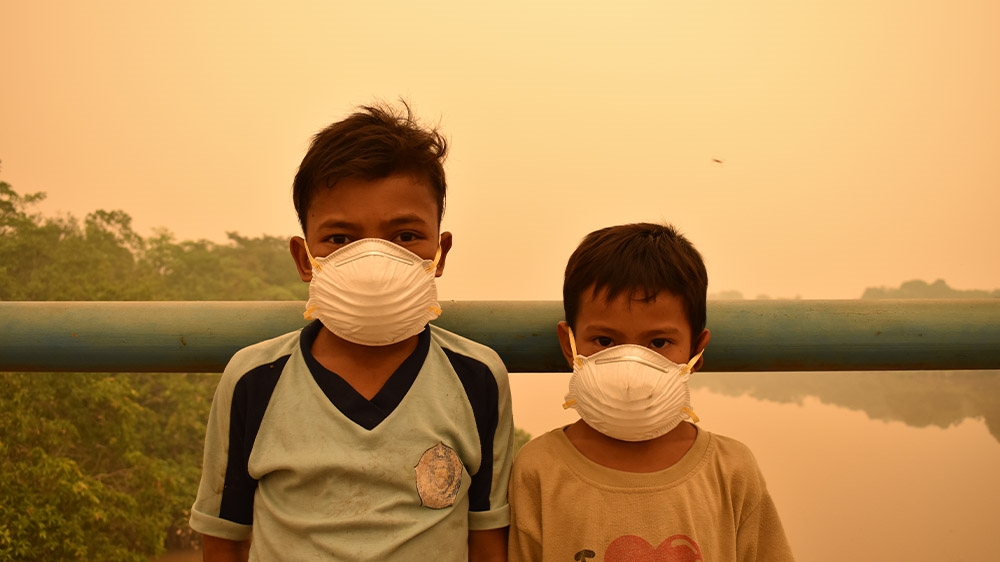 With air pollution at hazardous levels, people in and around Jambi wear masks. Doctors have warned of the long-term health risks from exposure to the fumes. [Raymondo/Al Jazeera|

In Jambi, Rafael’s mother Yuli tried to keep her son safe from the smog, but as he struggled to breathe, she rushed him to the clinic, one of 20 emergency response units set up for those affected by the pollution.

“I keep all the doors and windows closed and keep my two children locked up in the house,” she told Al Jazeera.

“I’m not brave enough to let them go outside. I’m so worried and I just hope it ends soon. I feel so sorry for the children.”

The city’s mayor, Syarif Fasha, closed schools on Friday and has ordered a review of the situation in the coming week.

“We monitor the air quality every thirty minutes and as soon as it hits unhealthy levels, I take action,” he told Al Jazeera. “If it keeps getting worse I will recall all teachers from schools as well as civil servants.”

Over the last 48 hours the air quality index peaked at 656, which is classified as “hazardous”.

Fasha has ordered 100,000 masks to be distributed across the city and every local health clinic in Jambi is required to have an operating “recovery room” for patients suffering from respiratory problems caused by the haze. The rooms are sealed and equipped with oxygen, air-conditioning units and an exhaust fan.

One such clinic is headed by Dr. Tety who told Al Jazeera that she had seen a spike in patients seeking treatment for acute respiratory infections in recent days.

“If patients come in with respiratory complaints, we take them straight to the emergency room and give them a nebuliser and oxygen. Then they go to the ‘recovery room’ for ‘cooling down’ where they are given more oxygen until their breathing returns to normal,” she said. 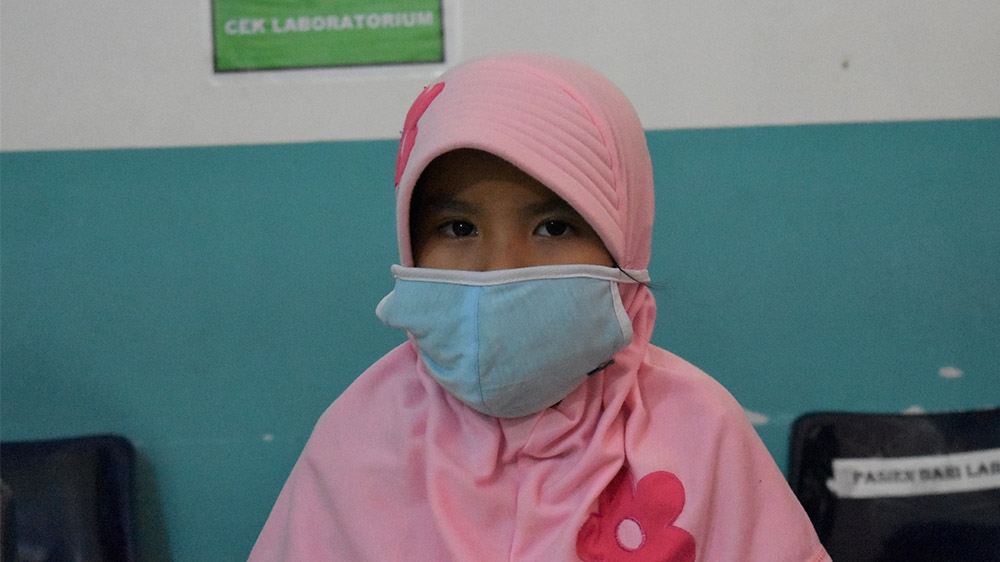 Marwa waits at the emergency clinic after coming down with a fever, cough and runny nose. Children, the elderly and sick are most at risk from the toxic haze. [Raymondo/Al Jazeera]

Dr. Tety said treatment was free for patients suffering from haze-related medical conditions, on the orders of the mayor of Jambi City.

Many of the patients are children, including six-year-old daughter Marwa who has a cough, fever and runny nose.

“They like doing their daily activities outside, but for the past few days I’ve kept them in isolation in the house. We only go out now if we really need to.”

But while the response in town has been praised, people living closer to the fire hotspots, say they feel abandoned by their local authorities.

In the village of Catur Rahayu, about an hour away from Jambi City, Siti Sunarsi can do nothing but sit in her home and hope for things to improve. Her daughter, five-year-old Nabilla, has been off school for one and a half months, and Sunarsi says she’s worried about her education as well as the health effects of the haze.

“She’s already forgotten everything she learnt, and the smoke is getting worse and darker every day. We keep asking ourselves, ‘When is this going to end?’” she said.

Pointing to the thick orange glow in the air, Sunarsi added that the smoke pollution was taking a huge psychological and physical toll on the local population.

“Everything is upside down. It doesn’t feel like day anymore, it always feels like sunset. People who are usually healthy are sick. We have to have the lights on all the time, and we’re weak and feverish from the fires.” 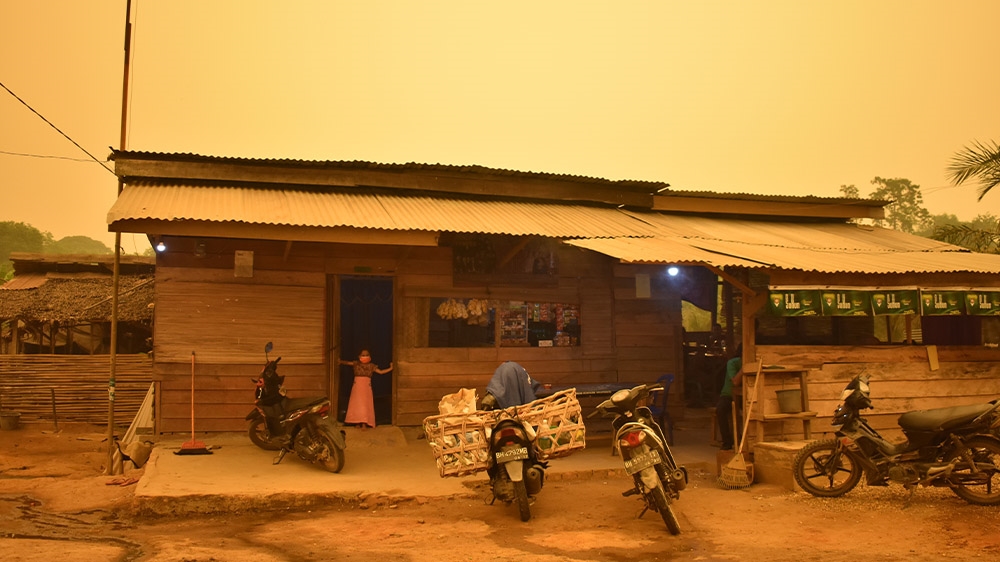 Nabilla at the door of her home in Catur Rahayu, about an hour from Jambi City, where people have been living with the pollution from raging fires for months. [Raymondo/Al Jazeera]

Asked if she had considered leaving the area and moving her children to a place where the air quality was better, Sunarsi pointed out that there were few options for local residents, as the haze had blanketed all of Jambi Province.

“Even if we could leave, where is there to go?” she said.

Last week, Indonesian president Joko “Jokowi” Widodo visited Riau Province – another haze hotspot in Sumatra – and said that the Indonesian government had deployed some 6,000 troops across Indonesia to put out the fires.

“We have made every effort,” he told the media.

Back in Jambi City, its beleaguered mayor said that the city had received only two helicopters to drop water bombs on the fires, compared with seven in other provinces like Riau, and that more resources and personnel were needed to tackle the choking haze.

Until then, he said he was doing all he can to keep his community safe.

“I’ve instructed all residents of Jambi to pray for rain to extinguish the fires, in accordance with their individual religious beliefs,” he said. “When nothing else is working, it’s our last resort.”

What to know about hyperinsulinemia

Meghan Markle to become next prominent influencer for global markets

Shots fired in Lebanon’s Tripoli as army clashes with protesters