Colombia’s Indigenous Guard – the authority responsible for security in indigenous territory across the country – travelled from the violent southwestern Cauca region to express outrage at Duque’s government, which was unable to persuade protest organisers to call off this week’s demonstrations after failed talks.

Workers’ unions, pensioners, students and ethnic groups, among others, have taken to the streets in the longest-running protests Colombia has seen in decades.

Protesters are angry over a wide range of issues from the poor health system, inadequate pensions, violence, inequality, corruption and the weak implementation of the 2016 peace deal. 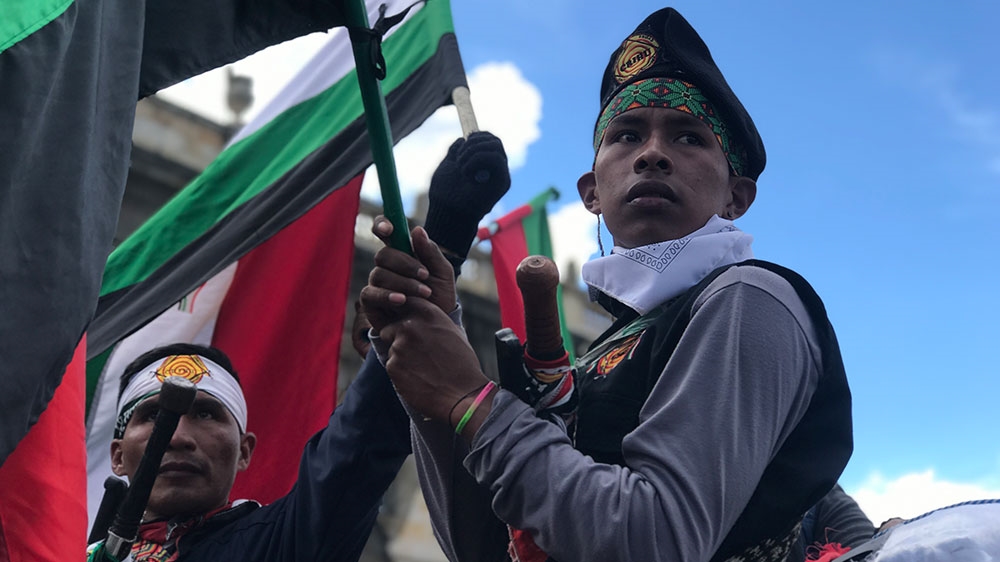 More than 750 indigenous leaders and human rights activists have been killed in Colombia over the past two years, according to local think-tank INDEPAZ.

“We came to march for our rights to education, health and the environment that the government is destroying,” said Jamileth Mulcueguege, 40, out of breath carrying a giant indigenous flag from her native Cauca region, heading to Plaza Bolivar. “If we unite, and stay strong, the government will listen. It’s all about the strength of the people.”

Since the death of Dilan Cruz, an 18-year-old who died after a projectile launched by riot police hit his head last week, protests have been generally peaceful, with police taking a softer stance.

“It is important to highlight how peaceful today was and I think that is partly because of restraint by police,” says political analyst Sergio Guzman. “They now understand how supposed or alleged abuse by police forces can create a unifying narrative among protesters. It is important to note that when allowed, Colombians will march peacefully and I think the government is understanding this.” 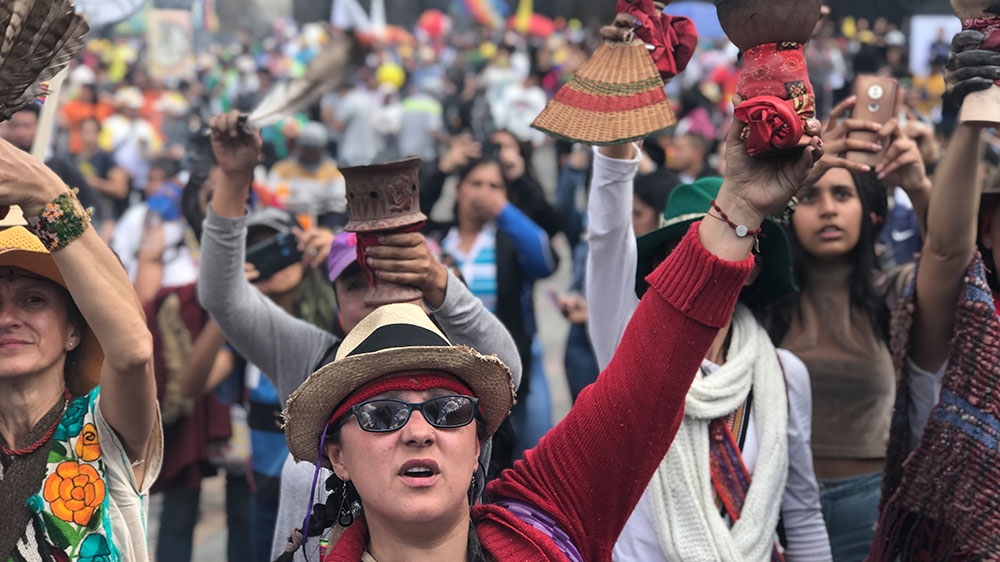 “Both the indigenous and Afro-Colombians have joined the strike, taking a stand against the ESMAD’s [riot police] repression towards protesters, calling for the right to protest without being harmed,” Gimena Sanchez, Andres director for the Washington Office on Latin America think-tank told Al Jazeera.

“Ethnic groups are upset about the lack of progress on the ethnic chapter of the peace accord and the government’s negotiating efforts to avoid having to make real changes in order to stop the strike,” Sanchez added.

When the Indigenous Guard arrived on Bogota’s main seventh avenue, people threw cut up pieces of white paper from high buildings to greet them, with applause and shouts of support. This continued until they reached the main square, where crowds roared in applause upon seeing them. Indigenous women then circled the plaza one after another, holding small pots containing burning incense, to “clean the badness away”.

Former mayor and left-wing ex-presidential candidate Gustavo Petro was present in the square. 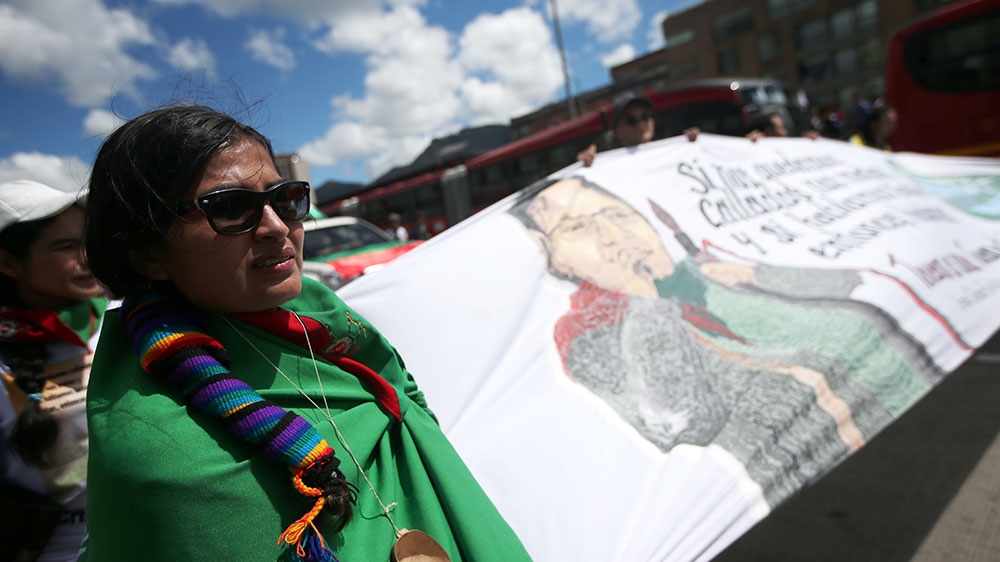 A woman takes part in a protest as a national strike continues in Bogota, Colombia [Luisa Gonzalez/Reuters]

Duque’s administration has promised nationwide conversations and over recent days has invited members of unions and strike organisers to discuss demands, without success.

He asked the National Strike Committee on Tuesday to call off further demonstrations planned for this week, but they declined, demanding the government meet only with them instead of including business groups and others in talks.

“I think it will be hard for the government to make substantive progress on talks as the strike committee’s demands are so varied and do not give the government ‘low hanging fruit’ to accomplish something quickly to show progress,” Guzman said, adding he imagines the government are stalling time until the Christmas period. 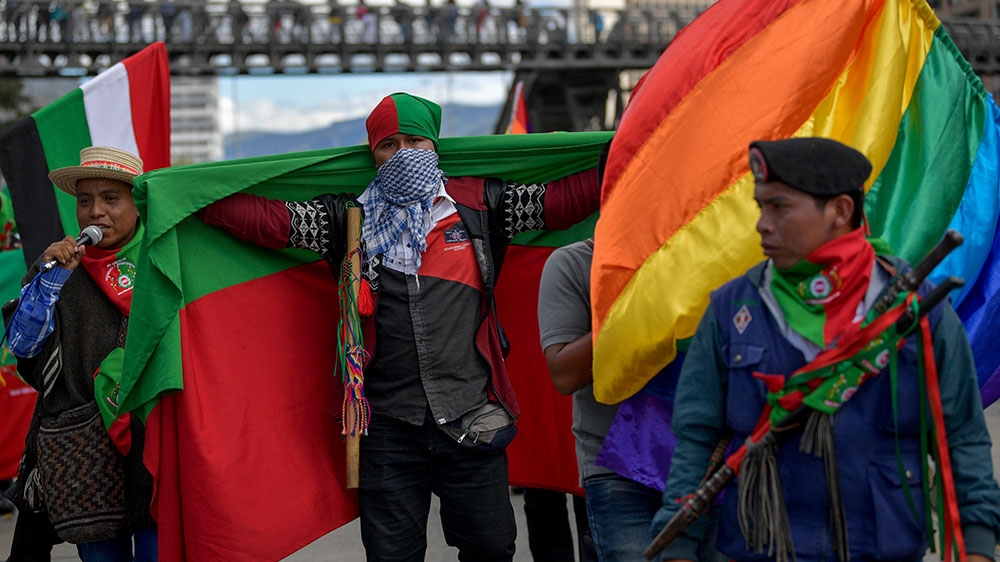 Many experts expect demonstrations to die down during the next few weeks, but that the beginning of 2020 will see protesters taking back to the streets.

Protesters and indigenous leaders told Al Jazeera they will continue on the streets until the government make real actions, and not empty promises.

“The government never listens to us, but with the bringing together of all these social sectors, I think this time we’ll achieve it,” said Derlin Silva, 22, from the Nasa indigenous community, carrying their striped red, white, green and black flag, who says he does not know how long they will stay in Bogota.

“We’ll keep going until they do listen.”

US Republican faces backlash for suggesting Ilhan Omar be hanged

Samoa shuts down in unprecedented battle against measles

Who are the main candidates in Tunisia’s presidential election?