Hameeda Begum described her arduous journey from the Himalayan region of Indian-administered Kashmir to the hot and humid room in Agra Central Jail in northern Uttar Pradesh state, where the exhausted 70-year-old was waiting to see her son.

A man in his early twenties offered her a bottle of water, saying, “Don’t lose hope. You are not alone.”

Hameeda drew a long sigh, placed her hand on the man’s hand and spoke in a barely audible voice: “May God give us patience.”

Other Kashmiri families watched as they sat on a steel bench, waiting to see their own jailed relatives.

After waiting for hours, Hameeda’s name was announced and she was called inside a room.

Some 20 minutes later, she emerged a different person. Restive and tense earlier, she said she was now happy and relieved.

“Seeing my son was like celebrating the Eid festival,” she said. “After all, I am a mother.”

Hameeda and the man, Gowhar Malla, travelled together for 965 kilometres (600 miles) from Kashmir over two days to reach Agra.

Unknown to each other before their journey started, the two pursued a common goal: to see family members arrested by the Indian authorities and held in the city’s largest prison. 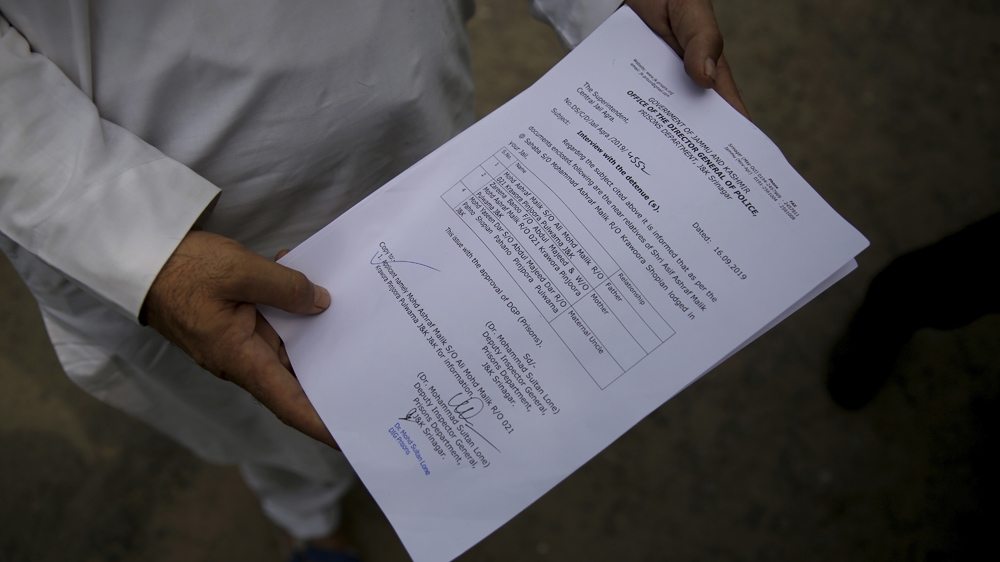 Mohammad Ashraf Malik, a Kashmiri whose son is imprisoned in Agra Central Jail, shows a permission letter to meet his son [Altaf Qadri/AP]

Many Kashmiris are being held in Agra Central Jail after the government of Hindu nationalist Prime Minister Narendra Modi imposed an unprecedented security clampdown in Indian-administered Kashmir, cutting virtually all communications and scrapping the region’s partial autonomy on August 5.

Thousands of Indian troops were sent to the region, already one of the most militarised in the world.

At least 4,000 people, mostly young men, have been arrested since, according to police officials and records reviewed by the Associated Press news agency.

Officials say at least 3,000 have been released and that fixed telephone line services have been restored.

About 250 of those still being held have been moved to various Indian jails outside Kashmir.

The records show that nearly 300 of those arrested are being held under the Public Safety Act, which allows authorities to hold people for up to two years without trial.

For years, human rights groups have accused the Indian troops of controlling the population of Kashmir with physical and sexual abuse and unjustified arrests. Indian government officials call the allegations propaganda by the separatists, who either want independence or a merger with Pakistan.

The conflict over Kashmir has existed since the late 1940s when India and Pakistan won independence from the British empire. The countries have fought two wars over Kashmir, and each controls a portion of the region.

A full-blown armed rebellion against Indian control began in 1989. Since then, about 70,000 people have been killed in the conflict, according to monitoring agencies.

The latest actions by the Indian government have further worsened the situation in the pristine valley, where most Kashmiris resent the Indian troop presence and support the rebels.

Hameeda remembered the morning of August 5 when her son, whom she did not want to name for fear of retribution from the authorities, was picked up from his bedroom by the armed forces and put in a Srinagar jail.

“They entered his room forcibly and dragged him out of his bed,” she said.

Hameeda spent the next 10 days trying to find her son in various jails in Kashmir. She even travelled to far northern districts bordering Pakistan but found no information about her son’s whereabouts.

Then one day, the news came.

A stranger knocked at her door and gave her a message. Her son was in Agra.

“I hadn’t even heard the name of this place before. If it weren’t for these people, I would have lost myself in this big city,” she said, pointing to other Kashmiri families waiting at the jail to see their relatives.

In interviews conducted by the AP, the Kashmiri families spoke about the arrests that followed August 5 and how they struggled to find their loved ones.

For Gowhar Malla, the trip from Kashmir to Agra to see his sister’s husband cost his family almost $1,000. He said he borrowed the money from his relatives.

“Seeing him means the world to me. I don’t care about the debt I am in,” Gowhar said.

His brother-in-law, Aamir Parviaz Rather, was picked up by the armed forces on the morning of August 6 and held in various jails in Kashmir before being moved to Agra.

The family was seeing him for the first time in 48 days. 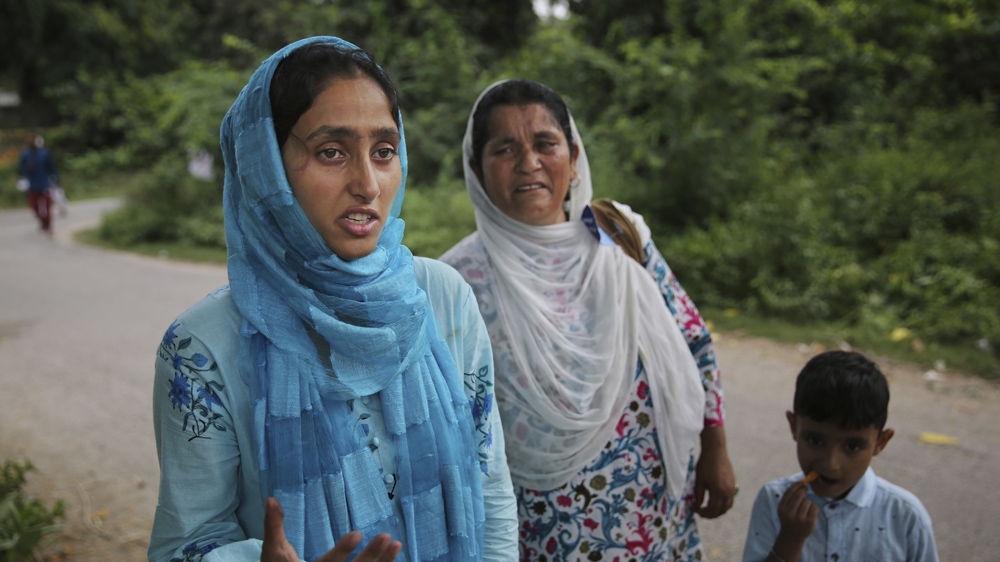 Maryam Rasool, wife of Kashmiri prisoner Aamir Parviaz Rather who is lodged in Agra Central Jail, with her mother-in-law [Altaf Qadri/AP]

Aamir’s wife, Maryam Rasool, spoke about how her husband’s health was worsening in jail because of the extreme humidity and heat.

“We hugged each other and cried. His face was swollen because of the heat. If they keep him for long, he won’t survive,” Maryam said, tugging her five-year-old son closely to her.

Her mother-in-law grabbed her loosely hanging scarf and wiped her tears as she heard Maryam speak.

“We are living under oppression,” Maryam said.

Agra’s deputy inspector general for prisons, Sanjeev Tripathi, refused to give any information about the Kashmiri prisoners in the Agra Central Jail.

“I have been specifically told by the government not to give any details to the media,” he said.

‘Hanging by a thread’

Fear of the authorities made the families hurry from the prison compound after their visits.

One man said he was told by police officers stationed outside the prison gate not to talk to anyone because the fate of their loved ones was “hanging by a thread”.

As the dusty narrow lane leading to the jail compound filled with vehicles carrying worried family members, an exhausted Mohammad Ashraf Malik of southern Shopian district in Kashmir ran to get prison documents copied at a local shop.

His son, Aasif Ashraf, is still recovering from three bullet wounds in his abdomen which he received during the protests in March, Malik said.

Arrested months before the latest clampdown, Aasif was moved to the jail in Agra after being rearrested by the police in August.

Malik said he managed to finally see his son after days of struggle.

“Police arrested him from his hospital bed in Srinagar when he was being treated. They arrested and rearrested him so many times and then finally jailed him here,” Mohammad said.

“Which country in the world jails an injured person who is recovering from bullet wounds?”

Khursheed Shah handed over to NAB on 10-day physical remand

‘Honest mistake’ sets off alarm about US troops in Iraq

Voting begins in Israel election seen as referendum on Netanyahu