The Trump administration has formally notified the United Nations that it will withdraw the United States from the 2015 Paris climate agreement, the first formal step in a one-year process to exit the global pact to fight climate change, US Secretary of State Mike Pompeo said on Monday.

The US, one of the world’s biggest sources of greenhouse gas emissions, would become the only country to leave the pact, a decision Trump promised to boost US oil, gas and coal industries.

Pompeo’s statement touted the US’s carbon pollution cuts and called the Paris deal an “unfair economic burden” to the US economy.

The State Department letter to UN Secretary-General Antonio Guterres started the clock on a process that would be completed one day after the 2020 US presidential election, on November 4, 2020.

While the move was expected, “we regret this and it makes the Franco-Chinese partnership on climate and biodiversity even more necessary”, President Emmanuel Macron said in a statement as he begins his visit to China.

Macron and President Xi Jinping will sign a joint document on climate during talks in Beijing on Wednesday that will declare the “irreversibility of the Paris accord”, the French presidency said.

Nearly 200 nations signed the climate deal in which each country provides its own goals to curb emissions of heat-trapping gases that lead to climate change.

The administration of former US President Barack Obama signed the US onto the pact, promising a 26-28 percent cut in US greenhouse gas emissions by 2030 from 2005 levels.

Trump campaigned on a promise to rescind that pledge, saying it would hurt the US economy while leaving other big polluters like China to increase emissions. But he was bound by UN rules to wait until Monday to file exit papers.

Trump has been slammed at home and abroad for his intentions to withdraw from the agreement. Earlier this year, millions marched around the world, calling for immediate action against climate change.

Niklas Hohne, founder of the NewClimate Institute in Cologne, Germany, said in a briefing last week that the “world’s second-largest emitter is intentionally turning its back on the Paris Agreement”.

He added that the consequence of having “higher emissions in 2030 than today is an irresponsible act at a time when the climate crisis demands urgent action”. 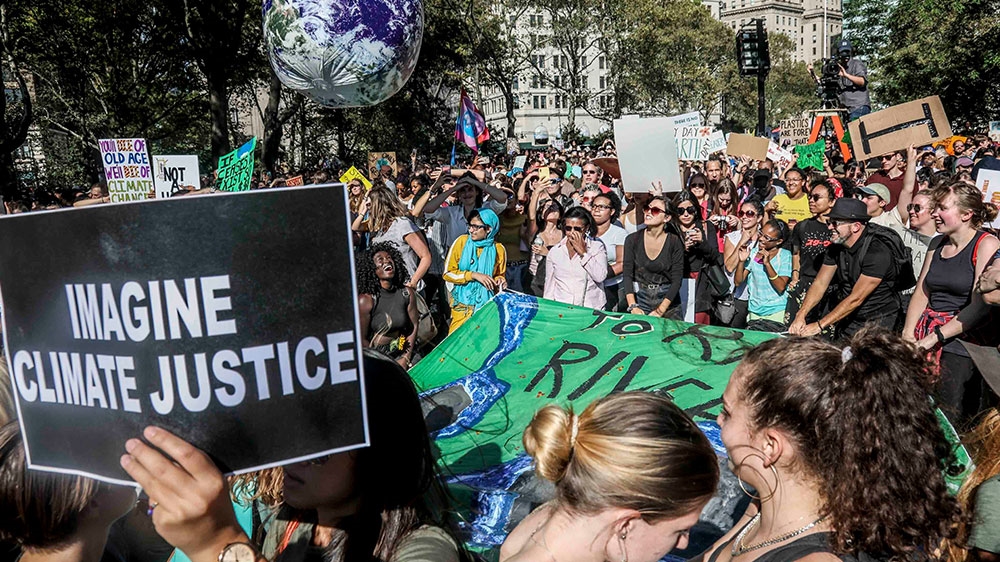 Michael Bloomberg, the UN secretary-general’s special envoy for climate action and a former New York City mayor, said in a statement that “abandoning the Paris Agreement is an abdication of leadership that the vast majority of Americans oppose”.

Since coming to office, Trump has embraced a series of regulatory breaks and boosts sought by the coal and utility industries, including overturning US support of the Paris climate accord and scrapping a legacy Obama climate programme aimed at pushing dirtier-burning coal plants out of the country’s electrical grid.

Separately on Monday, the Trump administration accelerated the pace of its environmental rollbacks for the country’s coal-fired power plants, proposing to weaken two Obama-era rules aimed at cleaning up dangerous heavy metals and ash from coal plants into groundwater and waterways.

The new proposals reduce “heavy burdens on electricity producers across the country”, EPA Administrator Andrew Wheeler said in a statement on Monday.

Climate Action Tracker, a collaborative and independent scientific tool to monitor government emissions targets, said in a statement on Friday that the withdrawal from the Paris agreement and the rollbacks in US climate policy will leave US greenhouse gas emissions three percent higher in 2030 than they would be with the policies still in place.

Responding to the Trump administration’s move on Monday, environmental groups said they hoped the US president would be defeated in 2020 by a rival who would re-join the agreement with bold new targets.

“The next president will need to rejoin the accord immediately and commit to the rapid, wholesale clean-energy transformation the climate emergency demands,” said Jean Su, energy director with the Center for Biological Diversity.

The American people must elect leaders who will confront climate change and put the public’s health and safety first. Until then, we will continue to fight the climate crisis with the urgency required, city by city and state by state. We can’t afford to wait.

Bloomberg said that “the American people must elect leaders who will confront climate change and put the public’s health and safety first”.

He added “until then, we will continue to fight the climate crisis with the urgency required, city by city and state by state. We can’t afford to wait.”

All the top Democratic presidential hopefuls seeking to unseat Trump in next year’s election have promised to re-engage in the Paris Agreement if they win.

But Trump’s withdrawal from Paris could still leave a lasting mark, said Andrew Light, a senior fellow at the World Resources Institute and former adviser to the US climate envoy under Obama.

“While it serves the political needs of the Trump administration, we will lose a lot of traction with respect to US influence globally,” he said, adding it could take time for the international community “to trust the US as a consistent partner.”

Dozens of US governors, mayors and other local leaders have reaffirmed their vow to continue to meet Paris agreement targets in the America’s Pledge initiative in the absence of federal leadership.

Until its formal exit, the US will continue to participate in negotiations over the technical aspects of the agreement, represented by a small team of career State Department officials.

The US and China, the world’s two largest carbon emitters, have recently been leading negotiations of the Paris “rule book” that outlines transparency and reporting rules for signatories.

More than 61,000 missing in Mexico amid spiralling drug violence