World leaders are gathering in New York City this week to take part in the 74th session of the United Nations General Assembly (UNGA).

The meeting comes as tensions flare in the Middle East over recent attacks on Saudi Arabian oil facilities, which the United States blames on Iran, allegations Tehran denies.

UNGA also comes just days after millions of young activists and their supporters marched in thousands of cities worldwide to demand greater action on climate change.

The general debate will take place from September 24-September 30, with dozens of world leaders scheduled to address the General Assembly.

France, Britain and Germany said it is clear Iran was responsible for an attack on Saudi oil facilities on September 14 and called on Tehran to agree to negotiations on its nuclear and missile programmes and regional security issues.

“The time has come for Iran to accept a long term negotiation framework for its nuclear programme, as well as regional security issues, which include its missile programmes,” the three governments said in a joint statement after French President Emmanuel Macron, British Prime Minister Boris Johnson and German Chancellor Angela Merkel met during the annual United Nations gathering of world leaders

Trump said he will discuss Iran in his speech before the UN General Assembly on Tuesday.

Trump, speaking to reporters as he met with Singapore Prime Minister Lee Hsien Loong, said Iran is under “more pressure than they’ve ever had” as a result of his maximum-pressure campaign of economic sanctions.

“A lot of things are happening with respect to Iran,” Trump said. “A lot more than you know. I’ll be discussing it a bit tomorrow.”

Trump didn’t elaborate in comments to reporters ahead of the start of UN meetings in New York, and it was not clear if concrete plans were in the works for another meeting meant to address a growing diplomatic impasse over North Korea’s development of nuclear-armed missiles targeting the US mainland.

Trump meets later Monday with South Korean President Moon Jae-in, the driving force behind the initial diplomacy that led to the first Trump-Kim summit last year and replaced threats of war in 2017.

Trump also will speak Tuesday before the UN General Assembly, two years after he used that podium to deride Kim Jong Un as “little Rocket Man” and to threaten to destroy North Korea.

Trump says hopes India, Pakistan can come together on Kashmir

US President Donald Trump said on Monday he hoped India and Pakistan could come together to resolve their differences over Kashmir but Pakistani Prime Minister Imran Khan said he would like the US to use its influence to help. 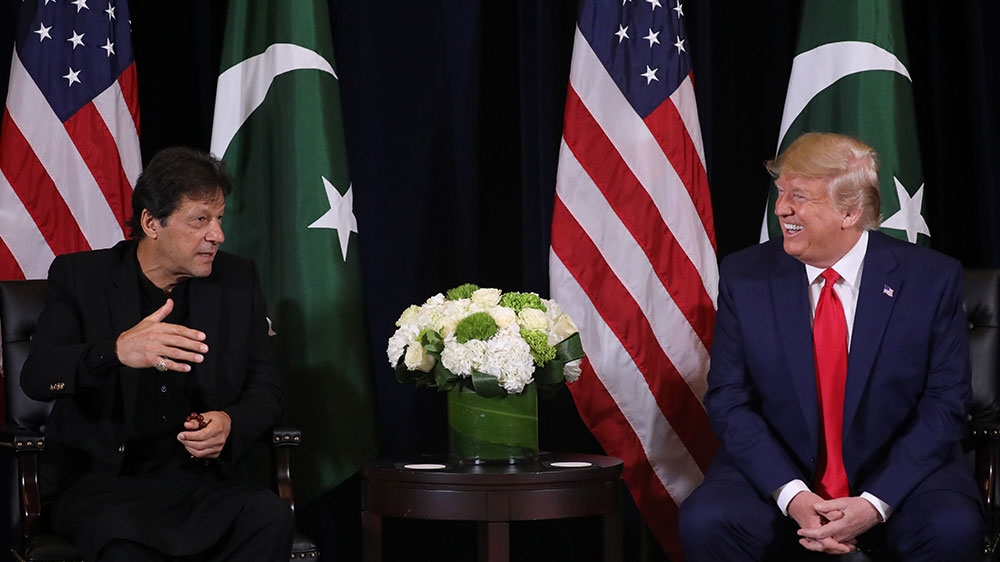 Trump and Khan met on the sidelines of the UN General Assembly. Trump is to meet Indian Prime Minister Narendra Modi later this week.

The president reiterated to Khan as they began their meeting with reporters present that he would be willing to mediate between India and Pakistan over Kashmir.

Latin American countries on Monday said they are willing to implement sanctions to force out Venezuelan President Nicolas Maduro but expressed deep reservations about any use of force.

The Lima Group, which includes Argentina, Brazil, Colombia and Peru, did not specify what type of sanctions. But in a joint statement, the countries made clear that they did not support a military intervention to depose Maduro.

“We do not support any invocation to the use of force or military interventions,” Peruvian foreign minister Nestor Popolizio told reporters after the meeting in New York, where world leaders are gathering for the annual United Nations General Assembly.

US President Donald Trump responded positively to British Prime Minister Boris Johnson’s idea of creating a new nuclear deal with Iran, saying that he respected Johnson and was not surprised he had floated the idea.

“I respect Boris a lot and I am not surprised at all that he was the first one to come out and say that,” Trump said of Johnson’s comment that “whatever your objections to the old nuclear deal with Iran, it’s time now to move forward and do a new deal.”

In fact, others including French President Emmanuel Macron, have spoken about the possibility of a new deal with Iran for more than a year.

French President Emmanuel Macron said he would meet Iranian President Hassan Rouhani on Monday and US President Donald Trump on Tuesday as he seeks to defuse tensions between Washington and Tehran.

An attack on Saudi oil facilities on September 14, which the United States and Saudi Arabia blamed on Iran, was a turning point, Macron told reporters. Iran has denied involvement.

US President Donald Trump made an unscheduled brief stop at the UN’s Climate Action summit.

With the lights down and the programme under way, Trump spent about 15 minutes at the summit, but did not speak.

Julio Borges, Venezuelan opposition leader Juan Guaido’s chief diplomat, said that US President Donald Trump’s attendance at a meeting solely about Venezuela during the UN General Assembly this week was a “clear sign” that pressure on President Nicolas Maduro would increase.

Trump and US Secretary of State Mike Pompeo are expected to attend a meeting with Western Hemisphere leaders to discuss Venezuela on Wednesday, Borges said.

Swedish teenage climate activist Greta Thunberg told world leaders at the opening of a United Nations conference on Monday that they had stolen her childhood with “empty words”.

“My message is that we will be watching you. This is all wrong,” Thunberg said, giving an emotional speech that appeared to move the audience at the UN General Assembly hall in New York City.

“I shouldn’t be up here. I should be back in school on the other side of the ocean,” she added, addressing the UN Climate Summit.

“You have come to us young people for hope. How dare you. You have stolen my childhood with empty words. Yet I’m one of the lucky ones.

“People are suffering, people are dying. All you can talk about is money and fairy tales of eternal economic growth. For more than 30 years the science has been crystal clear.”

Stage set for US, Iran showdown at UN General Assembly

The US and Iran are set to put forward their competing visions of security in the Middle East to the United Nations General Assembly this week, with US President Donald Trump expected to address the gathering of world leaders on Tuesday, and Iranian President Hassan Rouhani a day later.

As tensions continue to simmer in the Middle East following an attack on Saudi Arabia’s oil fields and the exchange of sharp rhetoric between Washington and Tehran, the two leaders are holding out hope for diplomacy, with Trump saying he is “a very flexible person” and Rouhani extending a “hand of friendship and brotherhood” towards its regional neighbours.

On Sunday, Trump again left open the possibility of an unscheduled meeting with Rouhani on the sidelines of the UN General Assembly.

Days after millions of young people took to the streets worldwide to demand emergency action on climate change, leaders gathered at the United Nations on Monday to try to inject fresh momentum into stalling efforts to curb carbon emissions.

UN Secretary-General Antonio Guterres has warned governments that they would have to offer action plans to qualify to speak at the summit, which is aimed at boosting the 2015 Paris Agreement to combat global warming.

World leaders including German Chancellor Angela Merkel, French President Emmanuel Macron and Indian Prime Minister Narendra Modi were due to address the one-day gathering, alongside companies working to promote renewable energy. Some 60 leaders were scheduled to attend the summit.

Interactive: How does your country vote at the UN?

Check out the interactive and explore the biggest issues facing the planet and see how they have evolved.

The UN invited 500 young activists and entrepreneurs to take part in Saturday’s meeting – the first of its kind – at the body’s headquarters in New York.

It came days before a climate action summit scheduled to begin on Monday, which UN Secretary-General Antonio Guterres has called to seek greater commitments from world leaders to reduce their greenhouse gas emissions in line with the Paris accord to avert runaway global warming.

‘No Planet B’: Millions take to streets in global climate strike

Millions of students and other activists abandoned school and work on Friday to join mass protests calling for action against climate change before a UN summit. 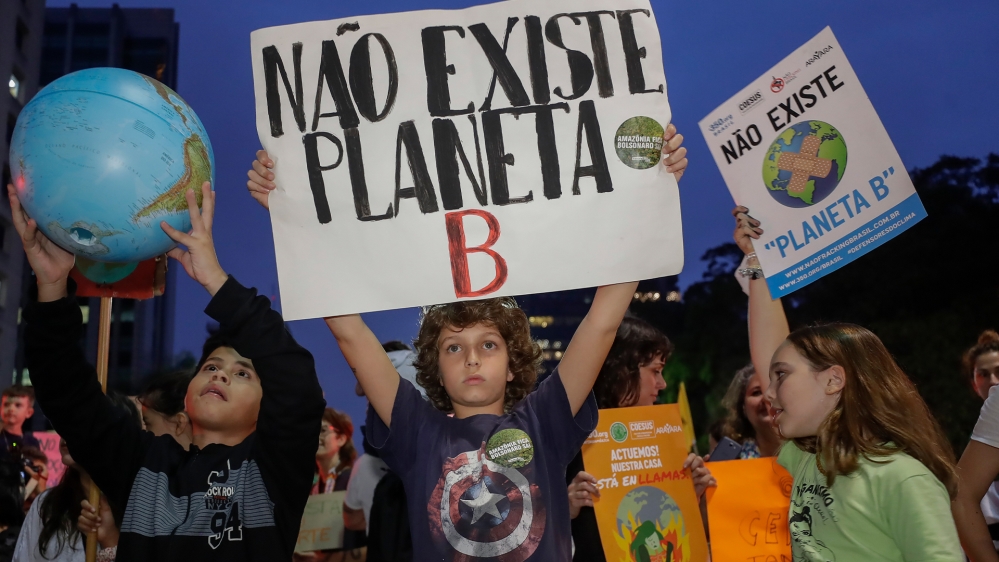 Children hold signs that read in Portuguese ‘There is no planet B’ during a global protest on climate change in Sao Paulo, Brazil [Andre Penner/AP Photo]

From New York to Guatemala City, Sydney to Kabul, and Cape Town to London, protesters in hundreds of cities around the world took the streets, demanding their governments take urgent steps to tackle the climate crisis and prevent an environmental catastrophe.

US issues visas to Rouhani, Zarif

Iran’s foreign minister spokesman said in a tweet that Zarif was set to leave for New York on Friday.

Trump said earlier in the week that he is not looking to meet Rouhani during a UN event.

What is the General Assembly?

Erdogan: ISIL fighter trapped near Greece ‘not our problem’