United Nations chief Antonio Guterres has expressed “deep” concern over the plight of hundreds of thousands of Rohingya refugees, urging Myanmar to assume responsibility by dealing with the “root causes” of their flight and work towards their safe repatriation.

A brutal army campaign in August 2017 forced more than 740,000 members of the mostly-Muslim minority to flee Myanmar’s Rakhine state, most seeking refuge in overcrowded camps across the border in Bangladesh. During its crackdown, which was launched in response to attacks by an armed group, the military carried out mass killings and gang rapes with “genocidal intent”, according to United Nations-mandated investigators.

Speaking at the start of a meeting in Thailand with the leaders of the Association of Southeast Asian Nations (ASEAN), Guterres said on Sunday Myanmar is responsible to “ensure a conducive environment for the safe, voluntary, dignified and sustainable repatriation of refugees”.

Myanmar does not recognise the Rohingya as citizens.

The country says it welcomes back those who agree to a bureaucratic status below full citizenship, and if they agree to live under tight guard after their villages were incinerated.

Only a few hundred Rohingya have returned to Myanmar so far, with many fearing further persecution in the Buddhist-majority country.

Guterres also called on Myanmar “to ensure humanitarian actors have full and unfettered access to areas of return”. 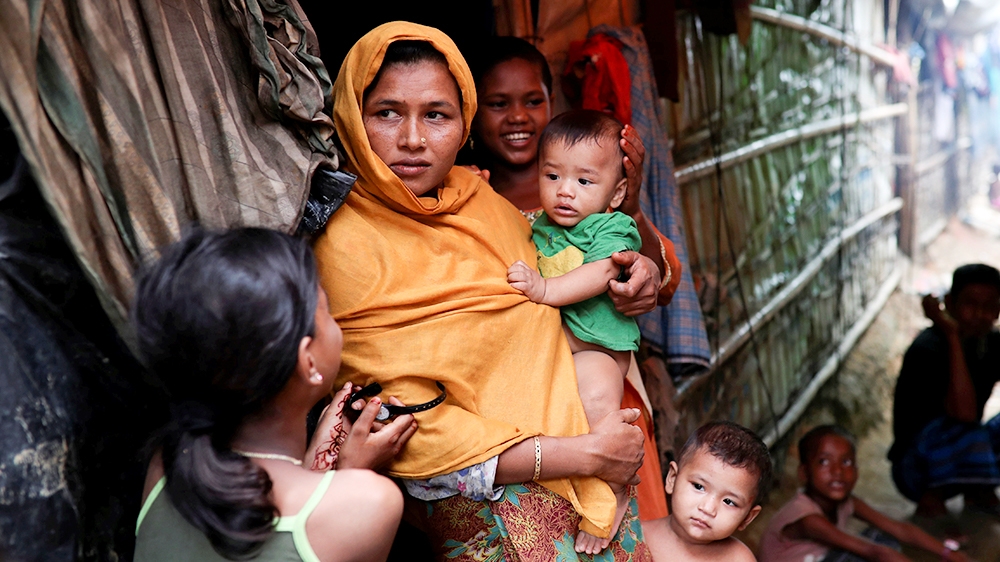 Rohingya refugees are outside of their makeshift tent in the Kutupalong camp in Cox’s Bazar [File: Mohammad Ponir Hossain/Reuters]

Myanmar’s army has come under fire for covering up the crackdown, which it blamed on Rohingya “terrorists”.

The military retains control of key functions of the state including national security and the police, but Aung San Suu Kyi, a Nobel Peace Prize laureate, has also been criticised for failing to take action to stop the violence against the Rohingya.

Despite endless criticism by rights groups and world leaders, Myanmar has refused to bend in its approach to the Rohingya.

Much of Rakhine remains largely closed to aid workers and journalists, who can only visit on tightly controlled, military-chaperoned trips. Myanmar’s security forces has launched an extensive and increasingly bloody campaign against a rebel group, which recruits from the mostly Buddhist local majority and is fighting the central state for greater autonomy.

Meanwhile, Southeast Asian leaders meeting in Bangkok on Sunday worked to salvage progress towards the China-backed Regional Comprehensive Economic Partnership (RCEP), which would comprise 16 countries that account for a third of global gross domestic product and nearly half the world’s population.

Host Thailand has been pushing for a preliminary deal by the end of the year, keen to push ahead at a time when US-China tensions threaten to slow growth in the region.

A major sticking point has been demands from India, which is worried about a potential flood of Chinese imports.

“Advancement on what could be the world’s largest free trade agreement has not been made,” Al Jazeera’s Scott Heidler, reporting from Bangkok, said. “There was hope that there will be movement forward on the 16 nations that are going to form this bloc, but India, it has been said, has some reservations and thus it hasn’t moved forward.”

Indian Prime Minister Narendra Modi told the Bangkok Post in an interview he is committed to ongoing RCEP negotiations but added “opening the vast Indian market must be matched by openings in some areas where our businesses can also benefit.”

Thousands rally in show of support for Lebanon President Aoun

Prince Harry, Meghan to have a tough time with privacy in LA: expert