The suspension was “unlawful, void and of no effect”, the UK’s Supreme Court concluded on Tuesday. Parliament will reconvene its current session at 11:30am on Wednesday morning, House of Commons Speaker John Bercow announced.

Johnson said he “strongly disagrees” with the ruling, but that Parliament “will come back”. He hinted that he would seek another suspension.

The prime minister, who suffered a series of defeats when he lost his parliamentary majority and ability to govern through the legislature, suspended Parliament just weeks before the crucial October 31 deadline for the UK to leave the European Union.

Johnson said at the time that a five-week suspension – also known as “prorogation” – was necessary in order to present a new domestic legislative agenda, a ceremonial event which culminates in a speech made by the queen outlining the government’s plans.

But the UK’s Supreme Court ruled unanimously on Tuesday that the real motivation was to prevent MPs from scrutinising the government ahead of the divorce deadline.

“This was not a normal prorogation in the run-up to a Queen’s Speech,” said Lady Brenda Hale, president of the Supreme Court, while handing down the judgment. “It prevented Parliament from carrying out its constitutional role for five out of the possible eight weeks between the end of the summer recess and exit day on 31st October…

“This prolonged suspension of Parliamentary democracy took place in quite exceptional circumstances: the fundamental change which was due to take place in the Constitution of the United Kingdom on 31st October. Parliament, and in particular the House of Commons as the elected representatives of the people, has a right to a voice in how that change comes about. The effect upon the fundamentals of our
democracy was extreme.”

The normal period to prepare a legislative agenda was four to six days, she added.

The suspension was “unlawful, void and of no effect”, she concluded.

“Parliament has not been prorogued. This is the unanimous judgement of this court.”

Jolyon Maugham, founder and director of the Good Law Project,was one of the driving figures behind the case.

“I am delighted today the Supreme Court has protected the foundational principle of any democracy – the right of MPs to do the job for which they were elected,” he said outside the court.

He paid tribute to the 8,000 people who had contributed to a crowdfunding campaign for the legal case. “This victory is yours,” he said.

“It’s now up to the Speakers of both houses – the House of Commons and the House of Lords – to work out what comes next,” Al Jazeera’s Rory Challands reported from the Supreme Court.

“The effect is that parliament is still in session and Boris Johnson has said he would respect the decision – the ball is now in his court.”

Commons Speaker John Bercow said the House must “convene without delay” and that he would be consulting party leaders “as a matter of urgency”.

Pressure on Boris Johnson to resign mounted immediately the judgment was announced.

To huge cheers and chants of “Johnson out!”, Labour leader Jeremy Corbyn said Johnson should become the shortest-ever servingBritish prime minister – and that Labour was ready to form a government.

“I invite Boris Johnson, in the historic words, to ‘consider his position’,” Corbyn told delegates at the Labour Party’s annual conference in Brighton.

“His position is untenable and he should have the guts for once to do the decent thing and resign,” she said outside the court. 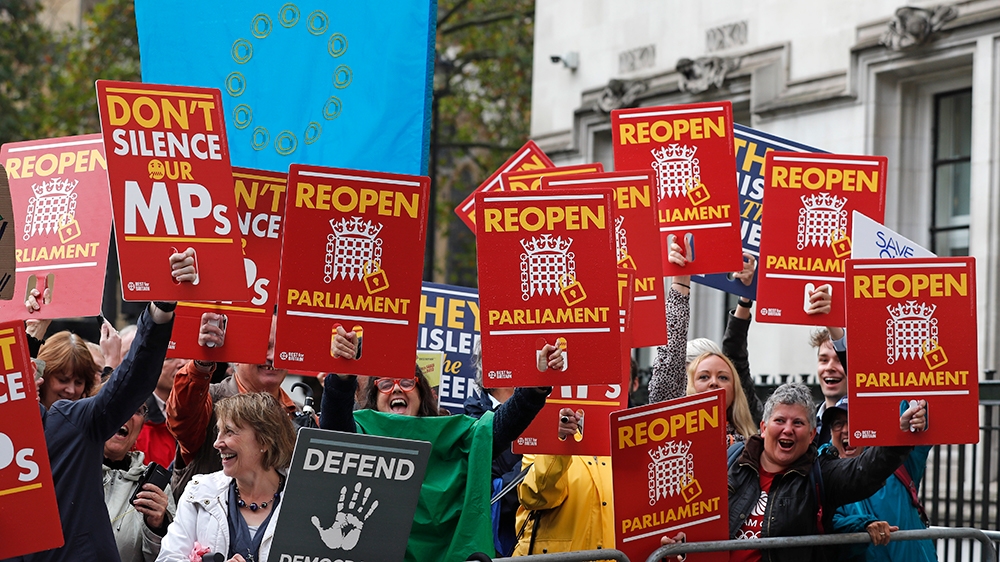 “I think important here too is the fact that we must have a written constitution after this,” said the Brighton Pavilion MP.

“Thankfully the Supreme Court has ruled unanimously in our favour, but it should never have come to this. It shouldn’t require the courts to uphold parliamentary sovereignty.

“That is why as well as celebrating this victory today, we must set about putting in place a written constitution so that we are not at the whim any more of ‘gentlemen’s agreements’ – this is a trial for parliamentary sovereignty.

“This is a triumph for all of us. Johnson must go and we must get back to work.”

London Mayor Sadiq Khan said Johnson “misled the British public, Parliament, the queen and the courts” about the reason he suspended Parliament.

“The truth is that the prime minister wanted to silence our MPs and prevent them from debating and scrutinising his catastrophic plans for a no-deal Brexit,” he said in a statement shared on Twitter.

“Parliament must now be immediately recalled so that MPs can get on with their job of holding this undemocratic and dishonest Government to account.”

Nigel Farage, the populist far-right leader of the Brexit Party who has failed seven times to be elected to Parliament, said Johnson had been badly advised. “Prorogation is the worst political decision ever,” he said. “Johnson’s adviser, Dominic Cummings must go.”

Conservative MP Tom Tugendhat shared a picture of himself sitting in the House of Commons following the Supreme Court’s ruling: “We’re sitting,” reads the caption.

The European Commission declined to comment on “internal constitutional matters” of the United Kingdom.

“We are heading towards an election, of course. We might get something in the coming weeks which might catalyse that; if there is a vote of no confidence we might end up with some kind of caretaker government. Other party leaders have said they don’t want that to be headed by Labour leader Jeremy Corbyn, but perhaps some other figure may end up leading a caretaker administration.”

Two US troops killed by Afghan soldier in Nangarhar attack

Trump warns of cutting ties China with China over cornoavirus