Mike Pence, the vice president of the United States, said Washington and Ankara have agreed to a ceasefire in northeast Syria.

The ceasefire grants the Kurdish-led forces, that were Washington’s main Syrian ally in the fight against the Islamic State of Iraq and the Levant (ISIL, or ISIS), five days to withdraw from the so-called “safe zone” Turkey wants to establish inside Syria.

Turkey launched its cross-border offensive on October 9, aiming to clear the region of Kurdish People’s Protection Units (YPG), a group Ankara considers “terrorists” linked to Kurdish separatists on its soil. The campaign, dubbed Operation Peace Spring, would also allow the repatriation of Syrian refugees, according to Turkish officials.

However, there are fears the offensive may result in mass displacement of people and the revival of ISIL.

Here are the latest updates:

Turkish President Recep Tayyip Erdogan has warned Turkey would restart its operation against Kurdish forces in Syria on Tuesday evening if they do not withdraw from a “safe zone”.

“If the promises are kept until Tuesday evening, the safe zone issue will be resolved. If it fails, the operation… will start the minute 120 hours are over,” Erdogan told reporters during a briefing in Istanbul.

Erdogan says Turkey has no intention to remain in north Syria

Turkey will continue its offensive into northeast Syria more rapidly than before if an agreement with the United States to pause the operation and allow the withdrawal of Kurdish forces is not fully implemented, President Tayyip Erdogan said on Friday.

Erdogan also told journalists that it was not a problem for Turkey if Syrian government forces, backed by Russia, were to enter areas cleared of the Syrian Kurdish YPG militia, adding that Ankara had no intention to stay in areas under its control in northern Syria.

Erdogan said that Turkey was planning to resettle one to two million Syrian refugees in the safe zone  in the “safe zone” it wants to set up in northern Syria following its military operation which ceased after a truce deal was reached with the US on Thursday night.

He also said he had informed US President Donald Trump about the offensive in a phone call a day before launching it. He added that “what is necessary will be done when the time is right” about a letter from Trump in which he told Erdogan to not be a “fool” and “tough guy”.

Turkish President Tayyip Erdogan has said that there were no ongoing clashes in northeastern Syria, where Turkey has been carrying out an offensive, after Ankara agreed with Washington to pause its offensive while Kurdish forces withdraw.

On Friday morning, shelling could be heard at the Syrian-Turkish border despite the five-day ceasefire to clear a planned “safe zone” of Kurdish militia, while the United States said the deal covered only part of the territory Ankara aims to seize.

However, Erdogan said the “safe zone” would stretch 440 km (273 miles) along Turkey’s border with Syria, with its eastern edge on its border with Iraq, and added that a depth of 20 miles (32 km) was agreed on with the United States.

He told reporters after Friday prayers in Istanbul that US and Turkish officials would be in constant contact to implement the agreement together. 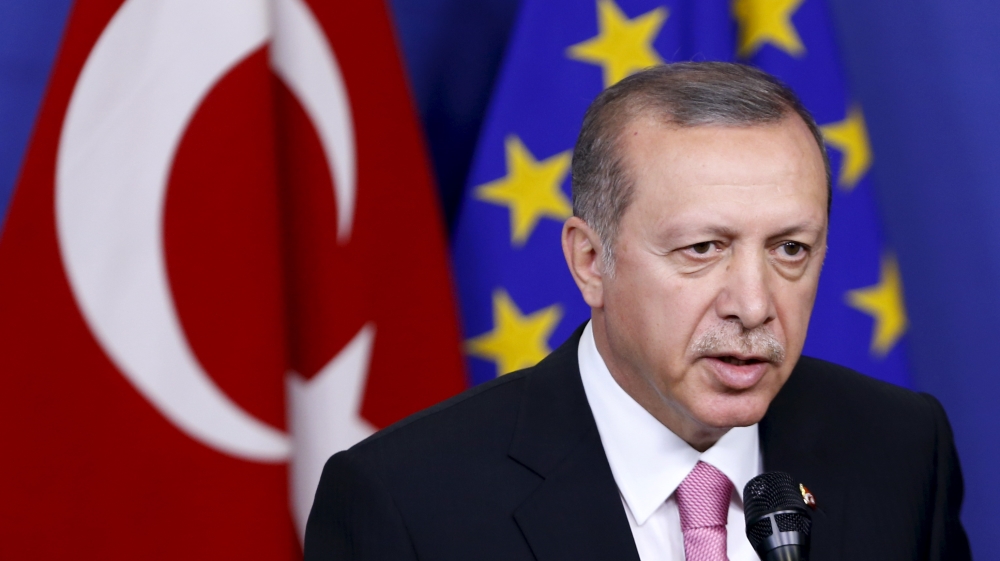 “Despite the agreement to halt the fighting, air and artillery attacks continue to target the positions of fighters, civilian settlements and the hospital” in the battleground border town of Ras al-Ain, spokesperson for the Syrian Democratic Forces (SDF), Mustafa Bali, said.

Pompeo seeks to assure Israel after US pullout from Syria

Secretary of State Mike Pompeo has underscored US-Israeli efforts to counter Iran in talks with Prime Minister Benjamin Netanyahu, in an apparent attempt to ease concerns in Israel that Tehran could exploit a US military pullback in Syria.

Pompeo and Netanyahu met in Jerusalem hours after Turkey agreed with the United States to pause its offensive on Kurdish forces in Syria.

Israel sees Syria’s Kurds, once US allies, as a counterweight to militants in northern Syria. It also worries that its arch-foe Iran or local allies could fill the vacuum left by a disengaged United States.

Pompeo said he and Netanyahu discussed “all the efforts we’ve made to push back against the threat not only to Israel but to the region and the world from the Islamic Republic of Iran.”

“We shared our ideas about how we can ensure Middle East stability together, and how we would further our efforts to jointly combat all the challenges that the world confronts here in the Middle East,” Pompeo told reporters with Netanyahu by his side.

The Kurdish-led Syrian Democratic Forces (SDF) said in a statement that they were committed to Turkey-US ceasefire deal reached on Thursday evening, despite reports of sporadic clashes between theKurdish-led forces and the Turkish-backed Syrian rebels in Ras Al Ain.

The statement came after the SDF said on Thursday evening would abide by ceasefire deal agreed betwen Turkey and the US.

The leader of Turkey’s Nationalist Movement Party (MHP) has welcomed the deal between the US and Turkey on Turkey’s anti-terror operation in northern Syria, calling the move “valuable.”

In a statement, Devlet Bahceli said: “The Nationalist Movement Party finds the deal made between Turkey and the US delegation valuable.”

Bahceli praised President Erdogan for “reiterating Turkey’s legitimate position to the world and for not making concessions on his dedication” on Turkey’s counterterror operation in northern Syria.

He lauded Turkish soldiers as “heroes” voicing his belief that they will remain “vigilant” and “prepared”, come what may.

Washington’s top diplomat and the veteran prime minister began the meeting on Friday morning at Netanyahu’s official residence in Jerusalem.

Israelis have been watching Trump’s decisions on Syria closely, concerned that their country too could be abandoned by its most important ally.

Beyond that, Israel has long-standing concerns over whether arch-enemy Iran will move to fill any vacuum in neighbouring Syria, where Tehran has been supporting President Bashar al-Assad in an eight-year-old civil war.

Kremlin wants information from Turkey about Syria deal with US

The Kremlin has said it expected to receive information from Turkey after it agreed to a deal with the US to halt its offensive in Syria for five days, the RIA news agency reported.

Turkish President Erdogan is due to hold talks with his Russian counterpart Vladimir Putin about Syria on Tuesday next week in southern Russia. 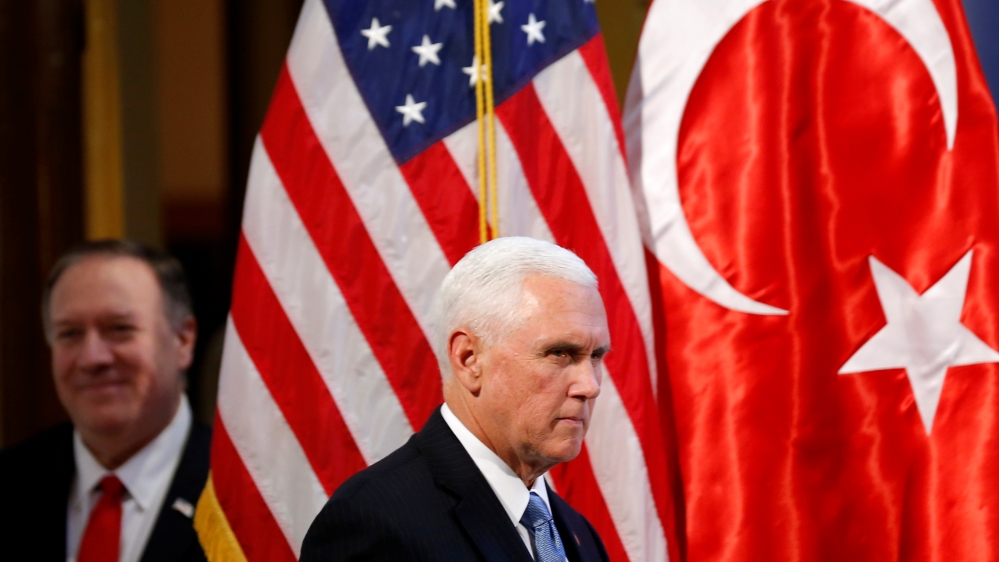 Shelling and gunfire have resounded around the northeast Syrian town of Ras al-Ain, a day after Turkey agreed to pause its offensive in Syria for five days to let Kurdish forces withdraw.

Machine-gun fire and shelling could be heard from the Turkish town of Ceylanpinar across the border from Ras al-Ain, and smoke rose from one part of the Syrian town.

It was unclear whether there was any damage from the shelling heard on Friday.

There was no immediate response from Ankara, which announced a suspension of the attacks late on Thursday, but it says all possible measures have been taken to avoid civilian casualties.

Australia has ruled out retrieving dozens of Australian women and children from refugee camps during the ceasefire in Syria.

Australian Home Affairs Minister Peter Dutton said on Friday the situation remained too dangerous to send troops or officials into the war-torn nation.

About 46 Australian women and children, who fled the territory held by ISIL, are being held at the al-Hawl refugee camp in northern Syria near the area of the Turkish operation.

Eight Australian offspring of two slain ISIL fighters were removed from Syria in June, Australia’s only organised repatriation from the conflict zone.

Antonio Guterres, the secretary-general of the United Nations, welcomed efforts to de-escalate hostilities in northeast Syria and protect civilians, according to a spokesman.

In a brief statement, the UN said: “The secretary-general recognises that there is still a long way to go for an effective solution to the crisis in Syria.”

The extent of the ceasefire stretched 100km along the Syria-Turkey border from the town of Tel Abyad to Ras al-Ain, he told Ronahi TV. “We have not discussed the fate of other areas,” he said, referring to other parts of northeast Syria where Turkey wants to create what it calls a “safe zone”.

“We will do whatever we can for the success of the ceasefire agreement,” Abdi said, describing it as a “tentative agreement”.

The president of the UN Security Council said that Thursday’s ceasefire would be “a great thing if it happens”.

South Africa’s UN ambassador, Jerry Matjila, this month’s president, told reporters that members were waiting for details. “If it does happen, I think it’s a step in the good direction,” he said.

Lebanon protests: Thousands demand ‘fall of the regime’ in Beirut