Speaker Nancy Pelosi said on Tuesday that the US House of Representatives will launch a formal impeachment inquiry against President Donald Trump, acquiescing to mounting pressure from fellow Democrats and plunging a deeply divided nation into an election year clash between Congress and the president.

The announcement comes amid reports that Trump may have abused his presidential powers and sought help from a foreign government to undermine former Vice President Joe Biden, the current Democratic frontrunner, and help his own reelection.

In a summer phone call with Ukrainian PresidentVolodymyr ZelenskyTrump is said to have asked for help investigating Biden and his son Hunter. In the days before the call Trump ordered advisers to freeze $400m in military aid for Ukraine – prompting speculation that he was holding out the money as leverage for information on the Bidens. Trump has denied that charge, but acknowledged he blocked the funds, later released.

The Trump-Ukraine phone call is part of the whistle-blower’s complaint, though the administration has blocked Congress from getting other details of the report, citing presidential privilege. Trump authorised the release of a transcript of the call.

“You will see it was a very friendly and totally appropriate call,” Trump said. He blasted the inquiry on Tuesday as “Witch Hunt garbage”.

As a formal impeachment inquiry in the House gets under way, here are all the latest updates:

Jerrold Nadler, the chairman of the House Judiciary Committee, tweeted on Wednesday that Barr “must recuse himself until we get to the bottom of this matter”.

The President dragged the Attorney General into this mess. At a minimum, AG Barr must recuse himself until we get to the bottom of this matter. #UkraineTranscript https://t.co/lBMsllCafp

Trump told Zelensky that Attorney General William Barr, the top US law enforcement official, would reach out to him about re-opening the investigation into the Ukrainian gas company, according to the rough transcript of a call between the US and Ukrainian leaders.

The connection to Barr marked a new and potentially more serious issue for Trump because it shows he took steps to involve the US government with a foreign country to investigate a political rival.

Trump did not ask Barr to contact Ukraine, Justice Department spokeswoman Kerri Kupec said, and Barr has not communicated with Ukraine about a possible investigation or any other subject. Barr, a Trump appointee, first found out about the conversation several weeks after it took place, Kupec said.

The White House released the memo on Wednesday.

The conversation between Trump and Ukraine’s president is just one piece of a whistleblower’s complaint made in mid-August.

The complaint is central to the impeachment inquiry announced Tuesday by House Speaker Nancy Pelosi.

Trump told the Ukrainian president “If you can look into it … it sounds horrible to me”.

Trump was talking about unsubstantiated allegations that Biden sought to interfere with a Ukrainian prosecutor’s investigation of his son, Hunter.

Trump also confirmed that he ordered his staff to freeze nearly $400 million in aid to Ukraine a few days before the call.

The president said he did nothing wrong.

The Democrat-led House of Representatives plans to vote on Wednesday on a non-binding resolution condemning the Trump administration for withholding the whistle-blower complaint related to Trump’s phone call with his Ukrainian counterpart. The resolution also calls on the administration to release the complaint.

Asked about Trump, Ukrainian leader says only his son can pressure him

“Nobody can put pressure on me because I am the president of an independent state,” Zelenskiy told Russian reporters in New York where he is attending the United Nations General Assembly.

“The only one person by the way who can put pressure on me … is my son, who is six years old,” said Zelenskiy whose comments were broadcast by the Rossiya 24 channel on Wednesday morning ahead of an planned meeting between Zelenskiy and Trump.

Donald Trump described himself Wednesday as the worst-treated president ever after Democrats announced a formal impeachment inquiry against him.

“The Democrats are frozen with hatred and fear. They get nothing done. This should never be allowed to happen to another President. Witch Hunt!,” Trump tweeted.

Prior to the Democrats announcement, Trump asserted than an impeach inquiry would be a “positive” for him.

The White House is preparing to release a whistle-blower complaint about US President Donald Trump’s call with Ukraine’s leader by the end of the week, Politico magazine reported on Tuesday, citing a senior administration official.

Trump said on Tuesday he would release a transcript of the call between the two leaders, but the White House had previously resisted releasing the complaint.

Trump noted that Pelosi’s announcement comes as he meets Tuesday with world leaders at the United Nations. He tweeted that “the Democrats purposely had to ruin and demean it with more breaking news Witch Hunt garbage. So bad for our Country!”

He added: “They never even saw the transcript of the call. A total Witch Hunt!”

Before the announcement, Trump asserted that an impeachment inquiry would be “positive for me”.

Speaker Nancy Pelosi has announced the US House is moving forward with an official impeachment inquiry of President Donald Trump.

Pelosi made the announcement on Tuesday from the speaker’s office at the Capitol saying “no one is above the law”. 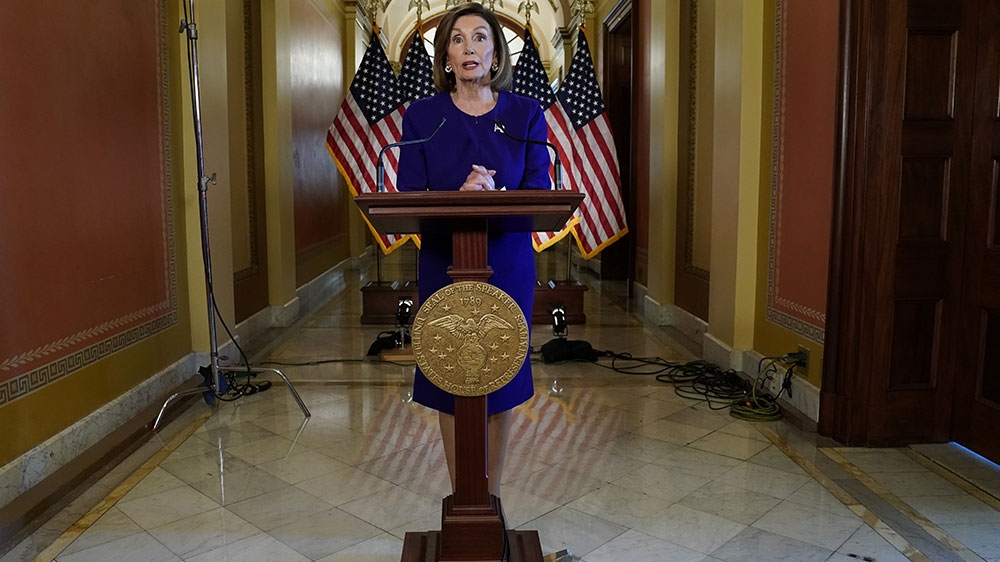 The move puts the Democratic speaker’s stamp on the investigations that have been under way in the House.

Pelosi said the president “must be held accountable.”

The Republican-led Senate has approved a nonbinding but symbolically important resolution calling on the Trump administration to immediately provide the House and Senate intelligence committees a copy of a whistle-blower complaint involving President Donald Trump.

The measure put forward by Minority Leader Chuck Schumer passed by a voice vote after Majority Leader Mitch McConnell endorsed the idea and noted that the bipartisan leadership of the Senate Intelligence Committee was working behind the scenes to obtain the complaint.

House Speaker Nancy Pelosi announced Tuesday that the House would vote on a similar resolution on Wednesday.

Former Vice President Joe Biden said Congress must use its “full constitutional authority” to determine whether President Donald Trump asked the Ukrainian president for dirt on Biden as he runs for the Democratic presidential nomination.

Biden said if Trump doesn’t comply on that and other inquiries, he “will leave Congress … with no choice but to initiate impeachment”.

Biden said that would be a tragedy of Trump’s “own making”.

He added that the president apparently believes he is “above the law”.

The chairman of the House intelligence committee said a whistle-blower who has been blocked by the Trump administration would like to speak to Congress.

The whistle-blower, whose identity is unknown, lodged a formal complaint with the inspector general for the intelligence community, but the acting director of national intelligence, Joseph Maguire, determined that it could not be forwarded to Congress.

The complaint at least partly involves President Donald Trump’s interactions with the leader of Ukraine.

Afghanistan’s presidential election: All you need to know

Spain claims its virus deaths down for fourth consecutive day

SEA Games: Medals and controversy for the Philippines

Sudan protest group has ‘no objection’ to handing Bashir to ICC