Tens of thousands of Lebanese protested on Sunday to keep up a nationwide street movement that has brought down the government, hours after a smaller rally of thousands was held to support the embattled president.

Unprecedented cross-sectarian demonstrations have gripped Lebanon since October 17, demanding a complete overhaul of a political system deemed inefficient and corrupt.

On Sunday evening, thousands of protesters streamed into the main square carrying Lebanese flags and a flurry of inventive slogans on placards, an AFP correspondent said.

“Revolution,” they cried to the rhythm of electronic beats in Martyrs’ Square.

“All of them means all of them,” they chanted, calling for political leaders from all sectarian stripes to step down.

They also called for a general strike on Monday to pressure political leaders.

The protest, the biggest since Tuesday when supporters of the powerful Hezbollah movement broke up the protest camp, followed a rally earlier in the day by supporters of Lebanon’s president, held to counter anti-government protests that have paralysed the country for more than two weeks.

President Michel Aoun has been among the main targets of mass protests that aim to sweep from power Lebanon’s entire sectarian and political elite.

Prime Minister Saad Hariri resigned last week, meeting a key demand of the protesters, but will stay on in the role of caretaker prime minister until a new government is formed.

However, Hezbollah and its allies, who dominate the government, have held their ground without offering any concrete proposals to meet the protesters’ demands.

‘Change is in hands of the people’

Abir Murad, 37, had come especially from the northern city of Tripoli to take part in Sunday’s protests.

“We are all united against the leaders … who haven’t changed anything in this country,” she said. “We came to say that change is now in the hands of the people.”

Draped in white sheets, three demonstrators staged a mock execution of the grievances that pushed them down into the street. Nooses around their limp necks, they bore signs referring to corruption, sectarianism, and the 1975-90 civil war. 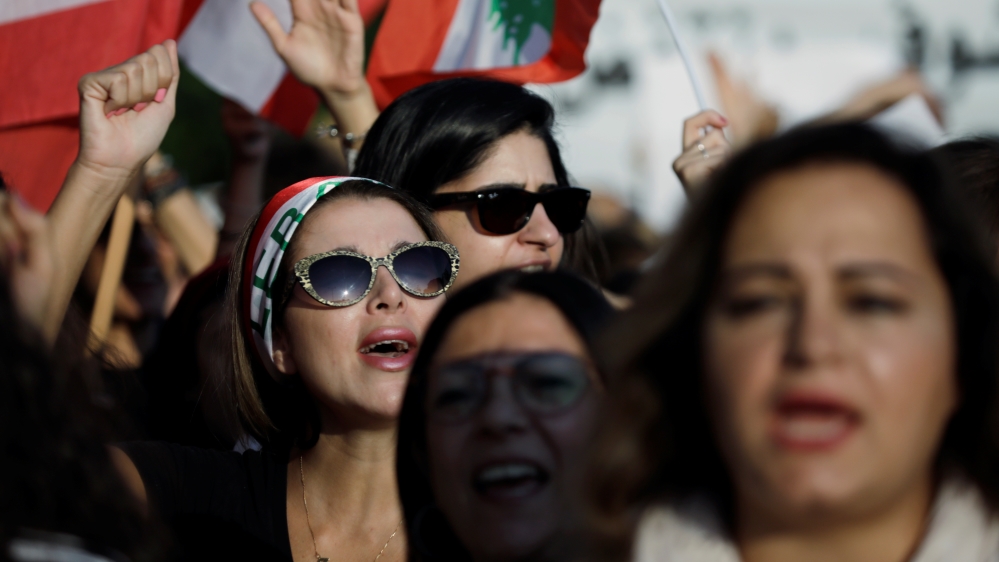 Protesters in the capital shouted in support of Shia-majority areas such as Tyre, the stronghold of the Hezbollah movement, which has urged its backers not to protest.

“Tyre, Tyre, Tyre. We’re rising up for you,” they chanted.

Despite Hezbollah’s warnings, protests were also staged in the southern city itself, the National News Agency reported.

People also took to the street in Sunni-majority Sidon and the northern city of Tripoli.

Lebanon had come to a standstill for around two weeks until the cabinet resigned on Tuesday, after which protest roadblocks were lifted and banks re-opened.

Protests temporarily petered out as rain hit the capital, but activists vowed to fight on until the rest of their demands were met.

Protesters have called for an end to Aoun’s tenure, as well as a drastic change to a political system dominated by the same figures and families since the end of the civil war.

Earlier in Beirut, hundreds of men and women took part in a feminist march from the national museum towards the main square.

“Our revolution is feminist,” read a banner carried by marchers.

“Speak up, end male chauvinism,” protesters chanted to the rhythm of drums.

Sarah Bukhari, 28, said she was there to demand equality.

“It’s so important there is real social justice and that women’s demands be heard,” she said.