Rondonia, Brazil– Katica Karipuna has high hopes for the future of her tribe, the Karipuna, who live in the Jacy-Parane riverbank, in the northwestern Brazilian state of Rondonia.

As one of the tribe‘s oldest members, she tries to teach the younger generations their native language, Tupi-Guarani. Her dream, she says, is to see her grandchildren have children.

But to talk about the past is almost too painful. She vividly remembers when the Karipuna were first contacted by non-indigenous people in 1978. Dozens of her relatives died from diseases brought by the non-indigenous. Their territory was also opened to the eyes of lumber and rubber producers, who have been trying to claim the Karipuna land ever since.

“Before we were many people, we had a lot of land and we were five villages,” says Katica, who has long dark hair with a hint of silver. She doesn’t know her exact age, but believes she’s about 60 years old. She is one of the few members of her tribe that uses traditional face paint, now a faint tone of green, the lines get entangled with her wrinkles. Her son, Andre, the tribe’s leader, translates from Tupi-Guarani to Portuguese, as the pair sit on a wooden bench in the middle of their remote village, surrounded by children and a group of puppies.

“Now, I feel afraid. The farmers are getting too close, they are invading a lot of our land. We are surrounded,” she says. 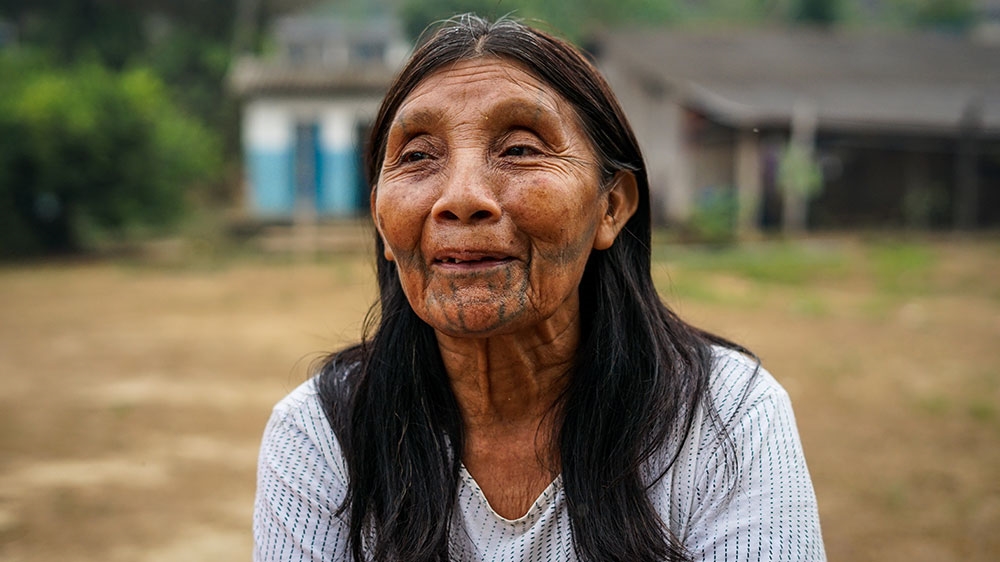 The Karipuna people have been one of the most affected indigenous groups in Brazil, surviving decades of invasions and attacks. But they’re also one of the most vital defenders of the Amazon – their home – from illegal deforestation and business. Katica and her sons say that fight has become even more important under far-right President Jair Bolsonaro, who has propped up agribusiness interests and weakened protections for indigenous groups and the Amazon, causing the Karipuna to fear their tribe and way of life may soon be lost.

The guardians of the forest

The Karipuna village is a five-hour boat ride away from Porto Velho, the nearest city, and Rondonia state capital.

The ride offers evidence of the destruction of the Amazon and the communities that depend on it.

“Can you feel how warm the water is? It used to be much colder,” says Adriano Karipuna, Katica’s other son, as he splashes his hands in the water while he sails a speedboat through the river. “Everything has changed, all of these trees died after a dam was built nearby in 2007, it drowned most of the forest,” he says. 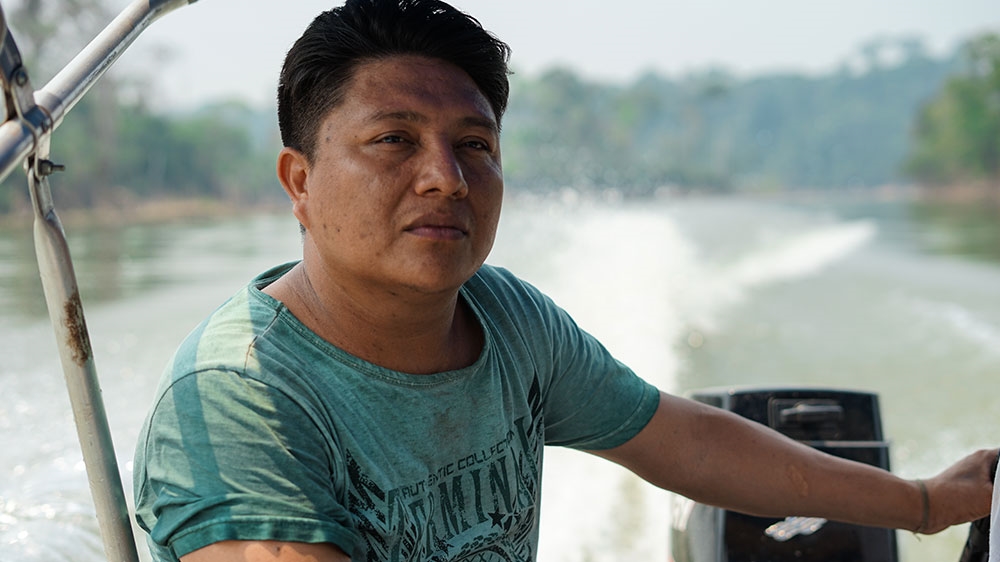 Near the city, the lush dense green of the Amazon where large birds fly to and from is replaced by dry pale land. Fallen branches come out of the water like crocodiles, and dead trunks dot the river like a colourless cemetery for trees. The fires raging in nearby areas is seen and felt in the thick air above.

Before reaching the rusted sign announcing the Karipuna reserve, Adriano points to fishermen boats floating in the serpentine green waters. Fishing in a natural reserve like this one is not permitted. Adriano also gestures towards the several fences protecting private property where cattle slowly grazes, showing the ease farmers have in illegally occupying protected land.

We, indigenous, are the great guardians of the forest, water and biodiversity. And everyone needs that. We just want to live freely.

As the only Karipuna member with a passport, Adriano is the spokesman for the tribe, having travelled to New York and Geneva to denounce the attacks on his people.

“We want to keep the forest alive. Our rivers are drying, our fish is disappearing. But everyone needs nature,” Adriano tells Al Jazeera. “We, indigenous, are the great guardians of the forest, water and biodiversity. And everyone needs that. We just want to live freely.” 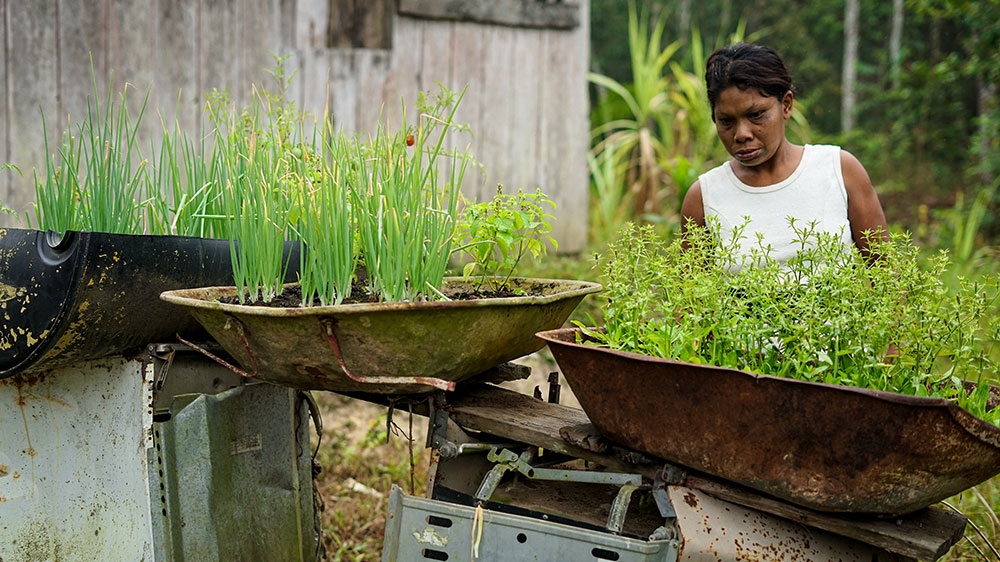 In the152,000-hectare reserve, the women tend to the gardens and the men take care of the animals as they wait for the beginning of another crop season to start producing yam flour. Karipuna children fill the humid rainforest air with laughter, playing hide and seek and swimming and jumping into the river. The quiet of the village is only interrupted by the constant sounds of the immense diversity of birds that live in the green canopies overhead.

It is hard, however, to contrast such a peaceful scene with the violence, destruction and looming death that has surrounded the Karipuna people for years.

The Karipuna have a remarkable history of resistance and survival, having managed to avoid near extinction. According to local reports and the Karipuna today, by 2005, only four members of the tribe initially contacted by non-indigenous people in the late 1970s were alive. Today, there are 58 tribal members, but their survival is at risk again as farmers and loggers move closer to their village.

In 2018, Brazil’s Federal Public Prosecutor’s Office (MPF) ordered authorities to draft an urgent plan to deploy “at least 15 people, for at least 10 days a month” to patrol the area for illegal actions by farmers, loggers and others eager to take advantage of the land. The Karipuna reserve was recognised in 1998.

The MPF identified a “scenario of attacks with many crimes being committed” on the reserve, including mining, illegal extraction of wood, intense deforestation, mapping of indigenous lands and threats to the indigenous people.

The Karipuna “live in the middle of the forest and don’t have enough means to defend themselves,” the report said. “Because they don’t have effective support from the state – that continues to stay inert in the face of continued criminal activities – there could occur the genocide of this people.” 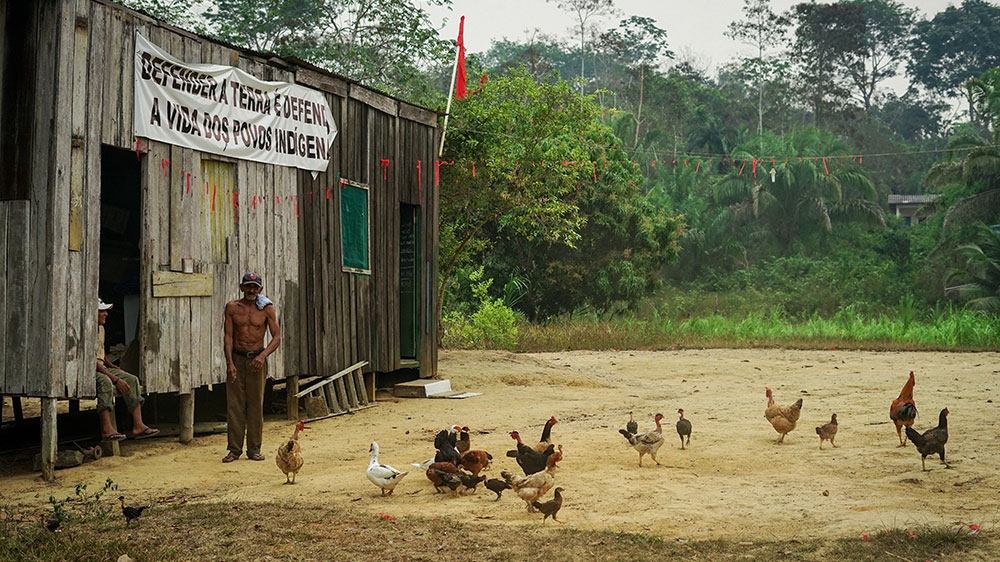 A sign reads, ‘defend the land and defend the life of the indigenous people’ on a building int he Karipuna village [Mia Alberti/Al Jazeera]

In 2019, police and officials with government bodies tasked with protecting the indigenous, conducted an operation called “SOS Karipuna” and successfully arrested farmers, destroyed bridges and other structures built by invaders and confiscated tonnes of lumber cut from the protected area.

But the Karipuna fear that under Bolsonaro, who has made controversial changes to those government agencies, such operations will cease to exist.

Just days after taking office in January, Bolsonaro announced he would divide the National Indigenous Affairs agency (FUNAI) into several departments and move the responsibility for demarcating new indigenous territories from the Ministry of Justice to the Ministry of Agriculture. The move was made to appease Bolsonaro’s large supporter base within the farming industry, but the indigenous say the president is leaving their lives lands and lands in the hands of the enemy. Bolsonaro fired the president of FUNAI and replaced him with controversial military official.

The president also targeted the Brazilian Institute of Environmental and Renewable Natural Resources (IBAMA), replacing the key environmental protection agency’s board and cutting its budget by 25 percent.

The Karipuna and other indigenous groups say the two agencies have been key in the effort to monitor, investigate and prosecute invaders of their land.

“By acts and by words, Bolsonaro is encouraging the ‘productive’ use of the Amazon by loggers, illegal land grabbers and illegal miners, at the same time disparaging the government authorities that should be protecting environmental protected areas, or areas that are indigenous territories,” says Richard Pearshouse, the head of crisis and environment at Amnesty International.

On Tuesday, a Brazilian congressional committee approved a proposed constitutional amendment that would allow commercial agriculture on indigenous reserves. Although the proposal must still be approved by another committee and both houses of Congress, Bolsonaro, who maintains exploration of the Amazon is needed for economic reasons, suggested that he is working on a package of measures that would address land demarcation and open up indigenous and quilombola (Afro-Brazilian) territory.

“It’s terrorism and intimidation on a massive scale. We worry this is the start of a real escalating to bloodshed in the Amazon,” he says.

Officials with FUNAI and IBAMA did not immediately respond to Al Jazeera’s request for comment.

“Before he was elected, [Bolsonaro] said he would reduce indigenous lands, give them to farmers, so invaders thought ‘let’s invade because now it’s our time,'” Andre says. 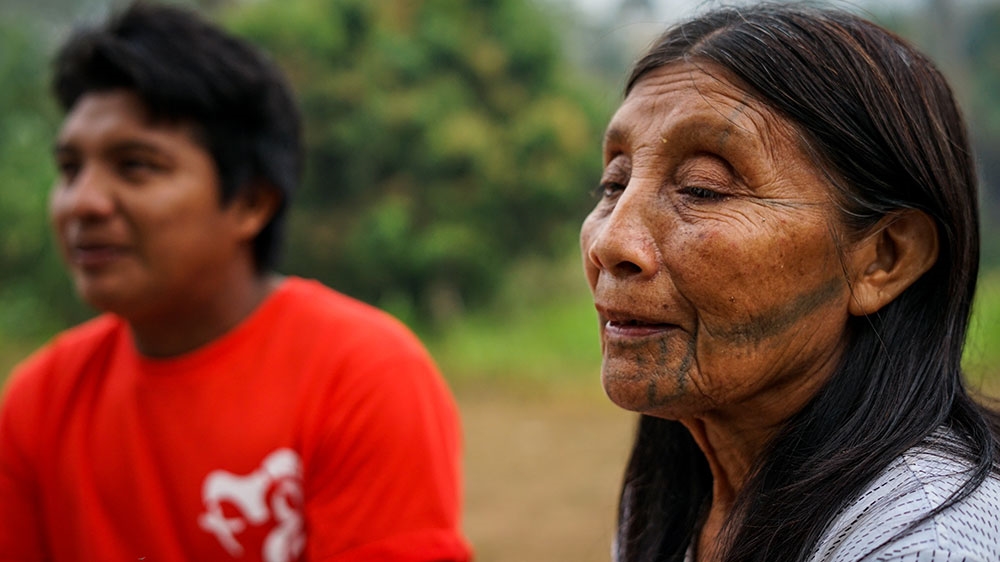 Katica and Adre sit in the village [Mia Alberti/Al Jazeera]

Earlier this month, Andre says loggers came within two kilometres of the Karipuna village and cut down bushes. He says he no longer goes to the city because he and his brother Adriano have a price on their heads.

“If they can get us and kill us, they will get into the village and do the same to them: execute everyone,” he fears.

Although the tribe is constantly filing reports of threats and invasions, Andre says those alerts haven’t been met with swift action.

“We are not trying to create new laws. The law is there, we just want the government to follow the law, it’s its duty,” he says.

For Katica, the fears bring many sleepless nights, constantly waking to look for invaders.

But she also looks to her own strength and that of her family as a small sign of hope for their future.

When Andre was born he was so small and sweet, Katica says with a smile as she looks at her son, but today, as the tribe’s leader, he continues the Karipuna’s fight to save and guard the forest. 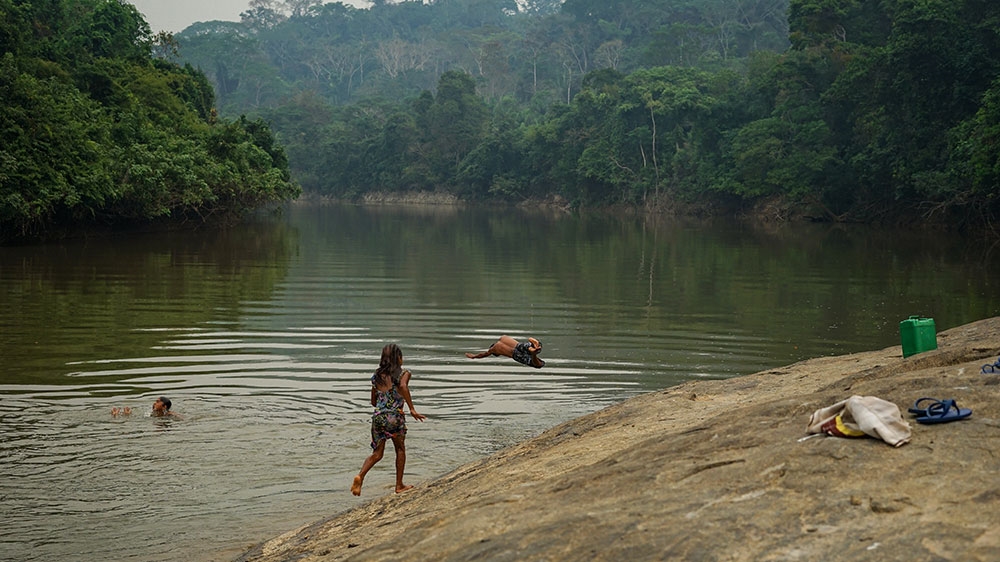