United States Vice President Mike Pence on Thursday criticised China’s record on trade and human rights, accusing the country of curtailing “rights and liberties” in Hong Kong and condemning US companies he said were too willing to ignore censorship and repression in pursuit of profits.

In a major policy speech on China that touched on an array of disputes, Pence said the US was not seeking confrontation or to “de-couple” from its main economic rival.

But he pulled no punches when addressing some of the political rifts between the two countries.

Criticising China’s construction of a “surveillance state,” and “increasingly provocative” military action, Pence held up Taiwan as a better path for Chinese people and took Beijing to task for its handling of pro-democracy protests that have rocked Hong Kong for more than four months.

“Hong Kong is a living example of what can happen when China embraces liberty,” he said. “And yet, for the last few years, Beijing has increased its interventions in Hong Kong and engaged in actions that curtail the rights and liberties that Hong Kong’s people were guaranteed through a binding international agreement.”

He said the United States stood with the protesters in Hong Kong, millions of whom have taken to the streets in sometimes violent clashes over what they see as China’s tightening grip on the city.

“We stand with you. We are inspired by you. We urge you to stay on the path of non-violent protest,” Pence said in the address at the Wilson Center, a Washington think tank. 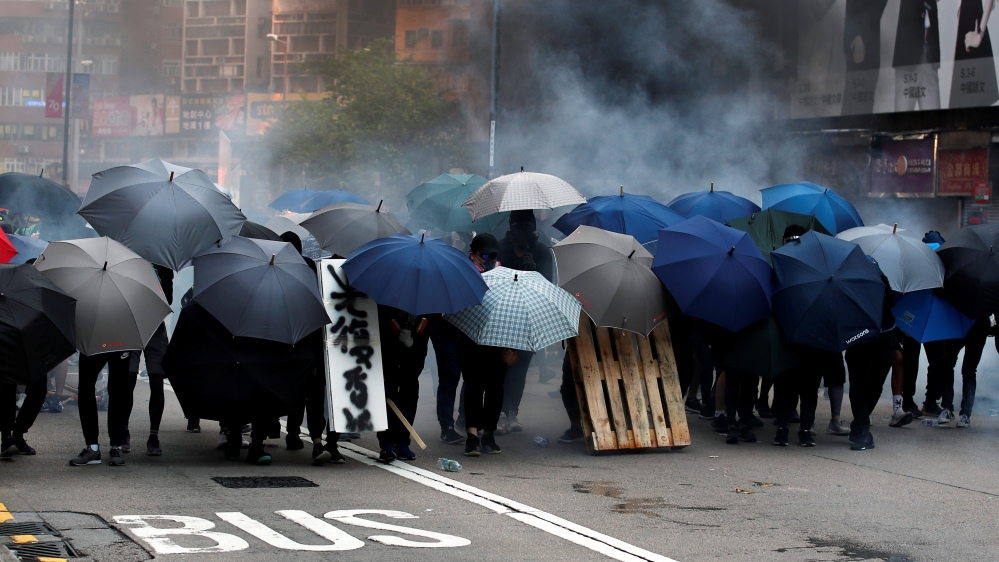 Protests have been going on in Hong Kong since June. [Umit Bektas/Reuters]

Pence was speaking as President Donald Trump tries to close a new trade deal with China. A new round of talks between Treasury Secretary Steven Mnuchin and Chinese officials to try to end the trade dispute is set for Friday.

Douglas Paal, a China expert with Washington’s Carnegie Endowment for International Peace, said Pence’s speech was “superficial and political”, but Scott Kennedy from the Center for Strategic and International Studies said it seemed to be a bid to provide a rationale for “policy moves on security, economics and politics which originally were much less coordinated and less integrated.”

In an editorial, China’s Global Times said that while Pence had recycled “old gripes” there was also a more “positive attitude” in the speech, which had been delayed from June.

“The growing tensions and the escalating trade war have undermined (the) interests of the two countries,” the editorial said. “China won’t be overwhelmed by US’ hardline policies, which has been fully proved in the past one and a half years. US political elites should recognise the fact.”

Pence singled out Nike and the National Basketball Association for failing to stand up to China after Houston Rockets General Manager Daryl Morey tweeted his support for the Hong Kong protests.

“Some of the NBA’s biggest players and owners, who routinely exercise their freedom to criticise this country, lose their voices when it comes to the freedom and rights of other peoples,” he said.

The NBA had acted like a “wholly-owned subsidiary” of China’s “authoritarian regime”, he said.

“Far too many American multinational corporations have kowtowed to the lure of China’s money and markets by muzzling not only criticism of the Chinese Communist Party, but even affirmative expressions of American values.”

Nike, the NBA and the Chinese Embassy in Washington did not immediately respond to requests for comment about the remarks. 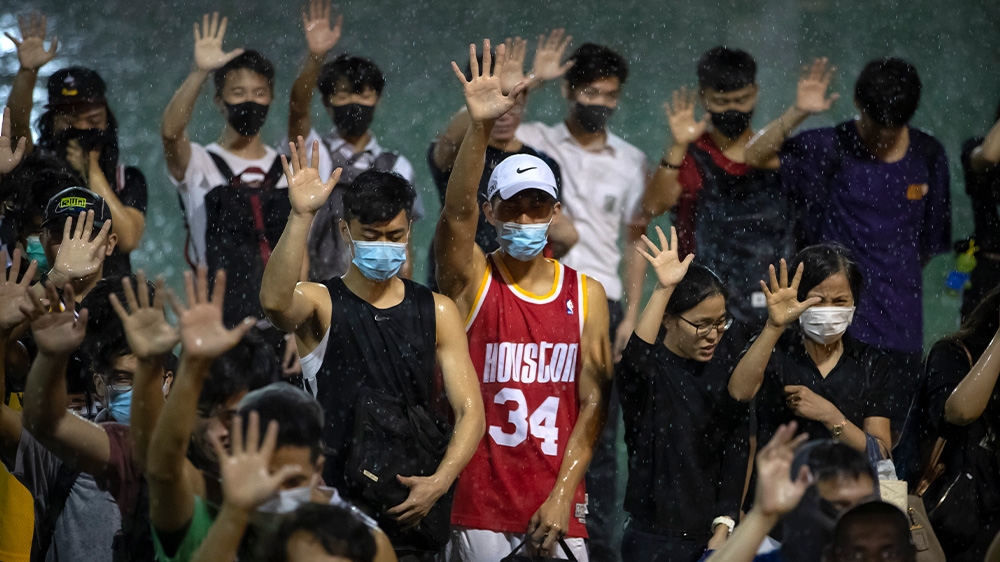 A Hong Kong protester wears a Houston Rockets jersey during a rally earlier this month. The protesters have five demands including the right to elect their ledaer. [Mark Schiefelbein/AP Photo]

Trump himself has done business in several countries with poor human rights records.

He received as much as $1 million last year for twin towers bearing his name in Turkey, where the president has imprisoned more than 150 journalists since a failed coup three years ago.

And before he ended the venture three years ago, Trump earned millions for licensing his name for a building in Azerbaijan, whose government has imprisoned dozens of critics, journalists and activists, according to Human Rights Watch.

Trump has also planted the seeds for possible future business in China, where he and his daughter Ivanka have won dozens of trademarks from the Chinese government for exclusive use of various names for restaurants, bars, hotels, clothing and shoes.

Negotiators are still working out details of a modest “phase one” deal in time for Trump and his Chinese counterpart, Xi Jinping, to sign it at an Asia-Pacific summit next month in Santiago, Chile.

Pence also chided China for its repression of religious minorities, including the treatment of the Uighurs in Xinjiang where the United Nations estimates some one million people are being held in internment-like camps that Beijing calls vocational training centres.

Many China experts had expected Pence to tread lightly on sensitive topics on Thursday, but others saw signs of a rapprochement.

“In contrast to the Hudson Institute speech of October 2018, the Vice President’s equally hard-hitting Wilson speech offered the beginnings of a positive vision for US-China relations,” said Robert Daly of the Kissinger Institute on China.