At 11:38 GMT (7.38am EDT) on Friday, United States astronauts Christina Koch and Jessica Meir switched on their spacesuits’ battery packs and officially started spacewalk No. 421 from the International Space Station (ISS) – the first-ever all-women spacewalk.

Ever since Russian cosmonaut Alexei Leonov became the first person to exit a spacecraft in space in 1965, men have egressed out of the hatch for all 420 spacewalks. Leonov, who was 30 years old at the time of his first spacewalk, was outside his spacecraft for 12 minutes and nine seconds. He died one week ago, aged 85.

Friday’s spacewalk was seen as a test for NASA to make good on providing the right spacesuits for women after a planned all-women spacewalk attempt in March was called off. The reason: there was only one medium-size suit on the ISS.

Despite the mere 12 hours it would have taken to assemble a correctly-sized spacesuit, NASA did not push back the March spacewalk, saying it could have compromised safety and the mission had already been delayed for months.

After coming under fire for having the wrong-sized spacesuits, NASA unveiled two new ergonomically correct spacesuit prototypes Wednesday. Since the crew on the ISS must work with what they already have on board, over the summer Koch built a second medium-sized spacesuit to ensure two women could spacewalk at the same time.

“As much as it’s worth celebrating the first spacewalk with an all-female team, I think many of us are just looking forward to it as just being normal,” said NASA female astronaut Tracy Caldwell Dyson, 50, who was a mission specialist for the 2007 Space Shuttle Endeavor Mission and the flight engineer for the 2010 Expedition 23/24 Mission on the ISS.

“I think that if it signifies anything, it is to honour the women who came before us, who were skilled and qualified and didn’t get the same opportunities,” said Dyson.

Women have been performing spacewalks ever since Russian cosmonaut Svetlana Savitskaya exited the Russian space station Salyut 7 in 1984. NASA astronaut Kathryn Sullivan became the first US female to spacewalk when she stepped into the open Space Shuttle cargo bay in October that same year.

“I think the milestone is that hopefully this will now be considered normal. It’s significant in that [the all-women spacewalk] got to overshadow the fact that women have been doing spacewalks for over 35 years. And we train like this every day. And so it’s pretty normal,” Dyson said.

Koch, 40, and Meir, 42, were on the outside of the ISS for about five and a half hours. Their mission was to replace a faulty “battery charge/discharge unit”, which regulates the amount of charge the lithium-ion batteries amass from the space station’s solar panels.

The batteries provide power to the station during the 90-minute night the station and its crew experience 16 times per Earth day. The ISS circles the earth at 27,520kilometres per hour, giving the astronauts 16 sunrises and sunsets every 24 hours.

“Stephanie, I have to ask, where are we flying over? It’s beautiful,” Koch said, while turning a bolt.

“Christina,Jessica, we are flying over the Middle East,” responded Wilson. 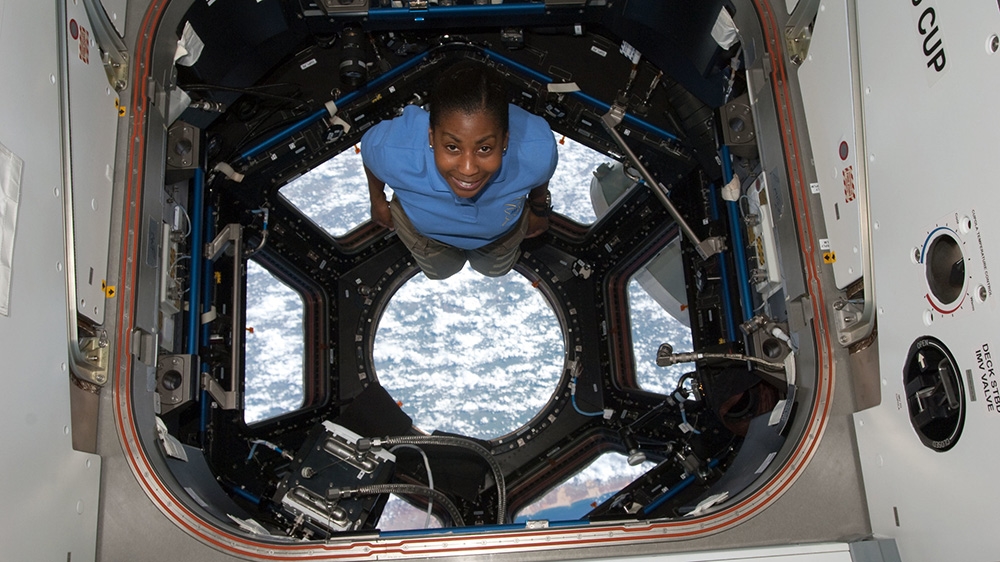 Malala reminds American graduates of the millions out of school: ‘Don’t leave them behind’