A “rebel alliance” of 21 Conservative MPs have on Tuesday night dealt an expected and humiliating defeat to UK Prime Minister Boris Johnson in the House of Commons.

They were able to seize control of the parliamentary agenda from the government and, after three hours of debate, MPs decided by 328-301 to go ahead with a vote on Wednesday aimed at blocking a “no-deal” withdrawal from the European Union.

As the result was announced, one MP shouted: “Not a good start, Boris.”

All those Conservative MPs who defied Johnson will have the party whip removed – essentially being kicked out of the party – and will be unable to stand as Conservatives in any forthcoming election, likely meaning the end of many political careers.

Johnson’s immediate reaction was to call for a general election. “We must make a choice,” he said. “I don’t want an election, but if this House votes for this bill, the public will have to choose who goes to Brussels to sort this out.”

He added that Parliament was “on the brink of wrecking any deal”.

Among those who rebelled was Ken Clarke, a former finance minister and a Tory MP for nearly 50 years, who accused Johnson and his coterie of plotting to fight a hasty election before the consequences of a no-deal Brexit became “too obvious to the public”.

He said Johnson’s answers in the Commons on Tuesday confirmed his “obvious strategy”.

“Which is to set conditions which make no-deal inevitable, to make sure as much blame as possible is attached to the EU and to this House for that consequence and then as quickly as he can fight a flag-waving general election before the consequences of no-deal become too obvious to the public.”

As Johnson addressed Parliament in the afternoon, Conservative MP Phillip Lee left the government benches, literally crossing the floor of the House of Commons, and defected to join the Liberal Democrats – reducing the Tories’ working majority to zero. With another 21 rebels facing having the whip removed, Johnson is now leading a very much minority government.

With Johnson’s pledge to leave the European Union with or without a deal – “do or die” in his own words – on or before October 31, parliamentarians and activists have been working to counter the threat they deem is posed by a no-deal Brexit. 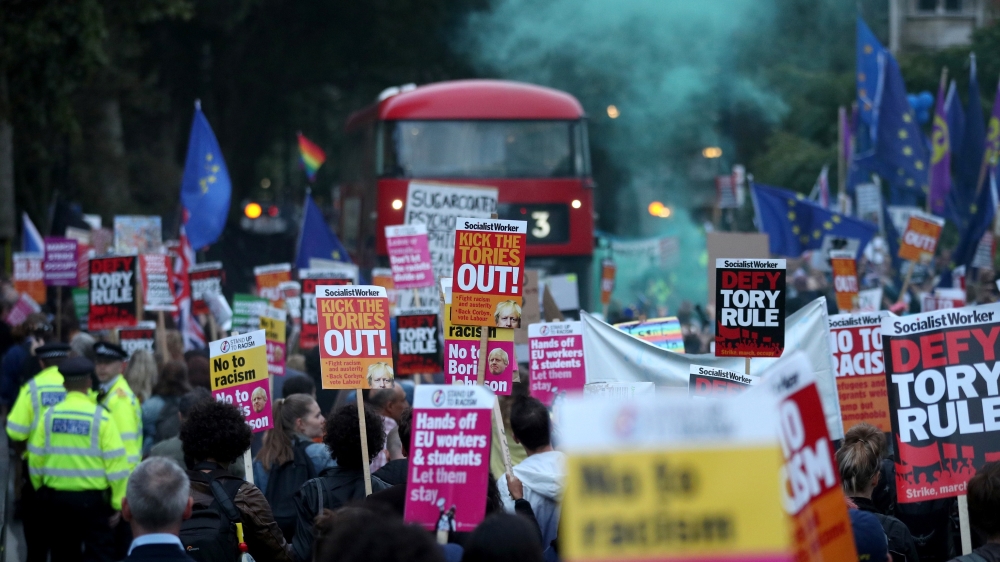 Last week, six opposition parties, led by the Labour Party’s Jeremy Corbyn, united in saying they would propose legislation forcing Johnson to seek an extension to the withdrawal deadline, allowing further time for either renegotiation of an exit deal, a vote of no-confidence in the Johnson administration, a general election, a second referendum on EU membership, or some combination of all of them.

Days later, Johnson sought – and received – permission from Queen Elizabeth II to suspend – or “prorogue” – Parliament for five weeks, severely limiting the timetable available for any legislative bid to block a no-deal.

“Ever since they moved to prorogue, it appears the Johnson government’s tactics have been clumsy, and they’ve isolated and insulted the rebels,” Scott Lucas, professor of international politics at the University of Birmingham, told Al Jazeera.

“They almost ensured they were walking into defeat. The government miscalculated, thinking the opposition factions were too divided, or would go straight for a vote of no-confidence.”

Joining Clarke among the rebels was 71-year-old Sir Nicholas Soames, the grandson of Winston Churchill.

“I will be voting against the government tonight with a very heavy heart,” Soames said during the debate.

Lucas hailed the opposition’s unity: “From the moment prorogation was on the table, they knew what they had to do within a very tight window. That appears to have rattled Johnson, who then started issuing the deselection threats against Conservative MPs joining the rebellion.”

Hundreds of protesters filled the grounds outside parliament as the debate got under way.

“There is no way the MPs inside the chamber cannot hear this protest,” said Al Jazeera’s Emma Hayward, reporting from Westminster. “Protesters say this is just the beginning of the fightback, and there’s a sense that the stakes cannot be higher.”

Al Jazeera’s Jonah Hull, also reporting from Parliament, said there was a carnival atmosphere among the protesters, “and something more like an atmosphere of chaos inside”.

Of course, this may all have been part of Johnson’s plan.

“The only explanation is that Johnson’s chief aide Dominic Cummings is pursuing the ‘tear it all down’ strategy,” speculated Lucas. “That is, ‘I’m going to tear down this entire party and rebuild it, shifting it into this very hardline territory, so even if no-deal is blocked, we now have this new hard-right party.'”

As the result became more likely, Steve Baker, the leader of the hardline “no-deal,” Europe Research Group faction of the Conservative party, called for an electoral alliance with Nigel Farage’s Brexit Party in order to boost the Tories’ chances of electoral success.

“This is a vision of the future where you could see Farage in the cabinet,” said Lucas.

Mark Shanahan, head of the politics department at the University of Reading, said the debacle was far from over.

“Any ‘experts’ saying they can predict the twists this will take are lying,” he told Al Jazeera. “This will be bloody in extremis. At best, it will tear the Conservative party apart – at worst, the country. I await the unexpected from Dominic Cummings.”

And just as quickly as a moment of opposition unity was established, so it collapsed, with a group of 17 Labour MPs demanding the re-tabling of former prime minister Theresa May’s EU withdrawal deal.

“Labour MPs for a deal” said they would seek to add the three-times-rejected agreement as an amendment to Wednesday’s proposed legislation – in the hope that it would garner enough support from MPs concerned both by either a no-deal Brexit or no Brexit at all.

“Parliament is paralysed by its extremes,” they said in a statement. “We do not agree with either camp. We need a deal.”

Leading Conservative Andrea Leadsom, minister for business and energy, suggested late on Tuesday night that the Tory rebels might escape their punishment if they were to vote with the government on Wednesday.

But even if they were not removed from the party, it is difficult to see how Johnson can continue to govern with no majority, and an election in the coming weeks seems inevitable.

“The wildcard is whether there is a firm plurality of leave voters that might translate into a majority for the Conservative party, or a Conservative-Brexit Party coalition,” said Lucas of the University of Birmingham.

“The unknown variable is how strong really are the Liberal Democrats, as well as Plaid Cymru in Wales? The SNP are strong in Scotland, and with [Scottish Conservative leader] Ruth Davidson stepping down, the Conservatives could be in real trouble there, as every seat really counts,” he added.

“The question is: Who’s willing to be the most audacious?”