Pro-democracy protesters have surrounded entrances to Hong Kong’s international airport and train services to the facility have been suspended, as the territory’s months-long political turmoil deepens.

The gathering on Sunday came after a chaotic night of running battles between police and masked protesters, in some of the intense violence since the anti-government demonstrations began three months ago.

Al Jazeera’s Sarah Clarke, reporting from the airport, said that police charged and dispersed the protesters around the airport in the afternoon, but the demonstrators achieved what they wanted by creating “transportation chaos”.

“There was no violence. Police did not use batons or tear gas. They simply charged towards the protesters, who dispersed in different directions as a result,” she said.

“Nevertheless, the protesters achieved what they wanted at this stage, which is a transport chaos.”

“Some parts of the airport are closed. There is a traffic jam because of the police blockade to identify the protesters on the way in. And the main train system to the airport has been suspended. There are two main entrance points to the airport, road and railway. And at this point both have major problems,” Clarke added.

Flights had so far not been disrupted, while riot police are present inside the terminals. The airport is covered by an injunction prohibiting protesters from entering in the wake of a shutdown last month which ended in ugly clashes between police and demonstrators.

A notice posted at train stations by the Mass Transit Railway operator said services had been suspended, a move “requested by the Hong Kong Government and Airport Authority to facilitate access control arrangements at the airport.”

The protest movement was triggered in June by a proposed bill that would have allowed extraditions of suspects to mainland China.

The draft law has since been shelved but the protests have continued amid concerns Beijing was planning to erode the autonomy granted to the city when it was handed back to China from Britain in 1997. The demonstrators’ five main demands include the right to elect officials and the resignation of Beijing-backed Chief Executive Carrie Lam.

China, which denies meddling in Hong Kong’s affairs, has denounced the protests and warned of the damage to the economy.

On Saturday, thousands of protesters took to the streets for a 13th consecutive weekend, in a mass march that ended with clashes with police who fired tear gas and water cannon.

Black-clad demonstrators, some carrying crosses, had gathered at a sport stadium in Hong Kong’s city centre, before fanning out into the streets, marching towards the police headquarters in central Wan Chai and clashing with police.

Late at night, a video from Hong Kong broadcaster TVB showed police on the platform of Prince Edward subway station swinging batons at passengers who backed into one end of a train car behind umbrellas.

The video also shows pepper spray being shot through an open door at a group seated on the floor while one male adult holds up his hands.

During Saturday’s protests, officers fired two warning shots in the air to scare off a group of protesters who had them surrounded and were trying to steal their pistols, the police said. It is only the second time live rounds have been used in more than three months of unrest.

“A large group of protesters participated in unlawful assembly in various districts since yesterday, despite police’s objection and warning,” the police said in a statement.

“The level of violence is rapidly escalating and their illegal acts have no regard to the laws of Hong Kong.”

The march came as police ramped up a crackdown, with police detaining three legislators hours after arresting several prominent activists including Joshua Wong, one of the leaders of the 79-day Umbrella Movement in 2014.

Wong, who was charged with organising an unlawful assembly in June, was released on bail.

The latest protests, which at one point blocked three key roads, came on the fifth anniversary of China’s decision to curtail democratic reforms and rule out universal suffrage in Hong Kong.

Hong Kong returned to China under a “one country, two systems” formula that allows it freedoms not enjoyed on the mainland, such as the right to protest and an independent legal system. 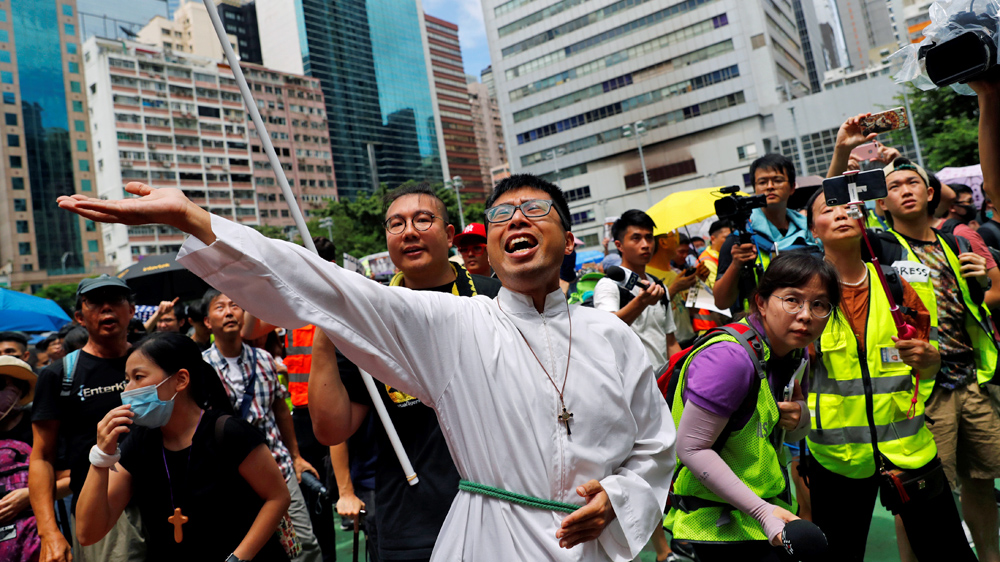 What can cause bumps on the elbows?

Taliban attacks second Afghan city as talks with US wrap up