Brazilian warplanes are dumping water on the burning forest in the Amazon state of Rondonia, responding to a global outcry over the destruction of the world’s largest tropical rainforest.

As of Sunday, President Jair Bolsonaro had authorised military operations in seven states to combat raging fires in the Amazon, responding to requests for assistance from their local governments, a spokeswoman for his office said.

Reuters news agency accompanied a firefighting brigade near the state capital of Porto Velho, where there were areas larger than football fields that had been charred, but active fires were contained to small areas of individual trees.

The dozen or so yellow-clad firefighters from the environmental enforcement agency Ibama easily cleared brush from around a burning stump with a leaf blower, doused it with jets connected to water packs mounted on their backs and covered it in earth.

A video posted by the defence ministry on Saturday evening showed a military plane pumping thousands of litres (thousands of gallons) of water out of two giant jets as it passed through clouds of smoke close to the forest canopy.

The response comes as leaders of countries in the Group of Seven (G7) nations currently meeting in France expressed grave concerns over the fires.

French President Emmanuel Macron on Sunday said the G7 was nearing a deal to provide “technical and financial help” to countries affected by the Amazon fires.

Nearly 80,000 fires have been registered across Brazil through August 24, the highest since at least 2013, according to space research agency INPE.

Bolsonaro announced the military would be sent in on Friday after several days of criticism from the public and world leaders that Brazil’s government was not doing anything to fight the fires. 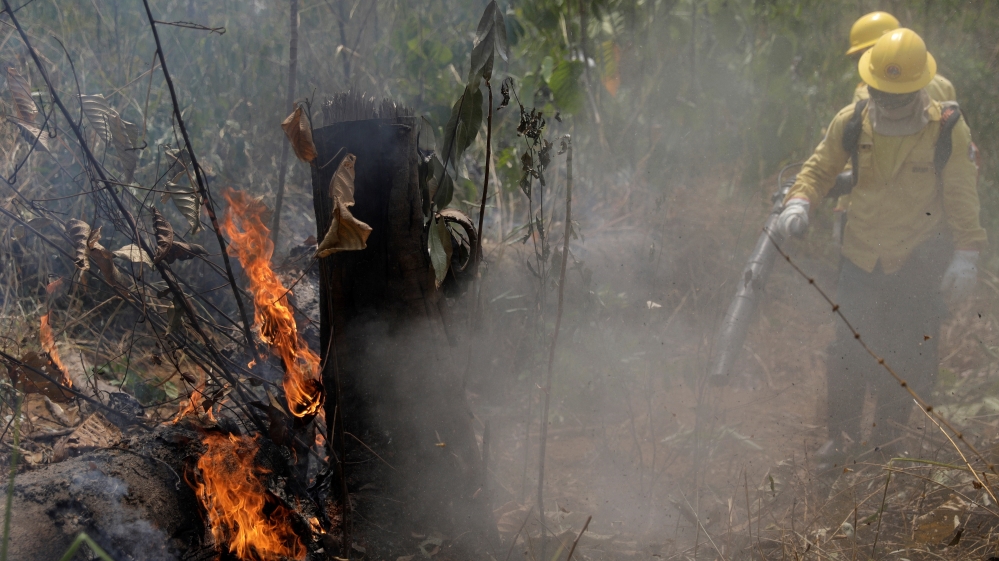 Nearly 80,000 fires have been registered across Brazil through August 24 [Handout via EPA]

He also said on social media that he had accepted Israeli Prime Minister Benjamin Netanyahu’s offer of a plane and specialised support for the firefighting operations, following a call between the two leaders.

But outside of Rondonia, the government had yet to provide any operational details for other states.

The defence ministry said in a briefing on Saturday that 44,000 troops were available in Brazil’s northern Amazon region but did not say how many would be used where and what they would do.

Military personnel around Porto Velho appeared to be largely coordinating firefighting efforts, according to a Reuters witness.

Asked for additional details, the Defence Ministry told Reuters in a statement that in all seven states that have asked for help, the military is planning operations to support firefighting initiatives already under way.

Justice Minister Sergio Moro had also authorised a force of military police to assist in fighting the fires, with 30 set to be sent from Brasilia to Porto Velho.

The president’s office posted to Twitter a photo of police officers on a plane bound for Rondonia set to arrive at noon.

Environment Minister Ricardo Salles posted a video showing a caravan of yellow fire prevention trucks and other government vehicles, saying they were on the ground responding in Rondonia.

On Sunday, thousands of protesters took to the streets in the fashionable Ipanema neighbourhood of Rio de Janeiro, after demonstrations across the country and in Europe on Friday. 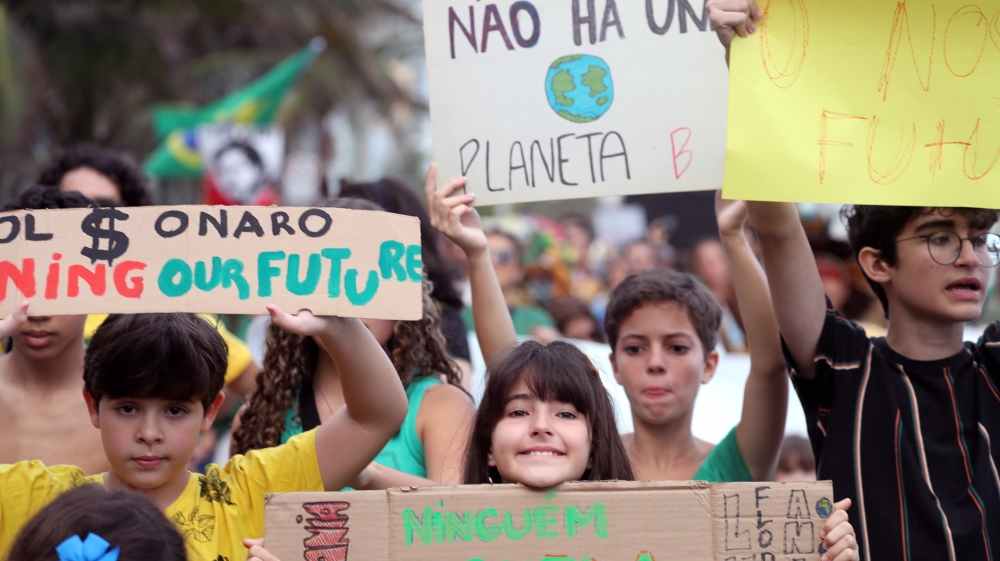 Thousands of protesters, including children, took to the streets of Rio on Sunday calling for the protection of the Amazon [Sergio Moraes/Reuters]

“The nature is being destroyed,” Teresa Correa, from the northern state of Para, told AFP news agency.

“The situation is worse since he (Bolsonaro) became president – he wants to explore and destroy everything.”

Colombian President Ivan Duque said on Sunday he would seek a conservation pact with other Amazonian countries – first in bi-lateral meetings in Peru this week and then at the United Nations General Assembly.

“Colombia wants to lead a pact, a conservation pact, between the countries that have Amazon territory,” Duque said after meeting with an Indigenous community in the Amazonian city of Leticia in southern Colombia.

“We must understand the protection of our Mother Earth and our Amazon is a duty, a moral duty.”

The Amazon is the world’s largest tropical rainforest and is seen as vital to the fight against climate change because of the vast amounts of carbon dioxide that it absorbs.

The Amazon, which provides 20 percent of the planet’s oxygen, is home to an estimated one million Indigenous people from up to 500 tribes as well some three million species of plants and animals, including jaguars, sloths, giant otters, river dolphins, howler monkeys, toucans, reptiles, frogs and insects.

Brazilian climate scientist Carlos Nobre said he worries if 20-25 percent of the ecosystem is destroyed that the Amazon could reach a tipping point, after which it would enter a self-sustaining period of dieback as the forest converts to savannah.

Nobre warned that it is not far off with already 15-17 percent of the rainforest having been destroyed.