Sharif, 69, is being treated at a government-run hospital in the eastern city of Lahore, where medical tests suggest he has a dangerously low count of blood platelets, Talal Chaudhry, a senior leader of Sharif’s PML-N party, told Al Jazeera on Friday.

“People are shocked that [given his platelet counts], that he has not suffered a major crisis,” Chaudhry said. “It could be a brain haemorrhage or internal bleeding. His condition could not be more serious than it has been for the last three days.”

Sharif’s doctors have not made a public statement about his health, but a member of government-constituted medical team that is treating him spoke to Pakistan’s Dawn daily newspaper to confirm the diagnosis.

“It is acute immune thrombocytopenic purpura, a bleeding disorder, in which the immune system destroys platelets,” the doctor told Dawn, speaking on condition of anonymity. “We are hopeful that his condition will improve in a few days.”

Sharif was admitted to hospital earlier this week, after he complained of bleeding from his gums and other ailments. Platelets are blood cells that help the human body to form clots to stop bleeding.

The three-time former prime minister is serving a seven-year jail sentence after being convicted in a corruption case last year. He remains under investigation in another corruption case, while a sentence in a third case was suspended in September. He denies all charges.

On Thursday, after repeated accusations from PML-N leaders of government negligence in treating Sharif, Prime Minister Imran Khan ordered authorities to give his predecessor “the best possible healthcare”.

“Political differences notwithstanding, my sincere prayers are with Nawaz Sharif for his health,” tweeted Khan. “I have directed all concerned to ensure provision of the best possible health care and medical treatment to him.”

Political differences notwithstanding, my sincere prayers are with Nawaz Sharif for his health. I have directed all concerned to ensure provision of the best possible health care and medical treatment to him.

Sharif has suffered a number of health issues in recent years. In June 2016, while still prime minister, he travelled to London for open-heart surgery to attend to a perforation in that organ.

Since being jailed in July last year, Sharif has been held at Lahore’s Kot Lakhpat jail and by the country’s anti-corruption watchdog, the National Accountability Bureau (NAB).

NAB continues to investigate a third corruption charge against Sharif related to a family-owned sugar mill.

PML-N leaders say Sharif has been denied his fundamental rights in jail, and that he has been imprisoned in cells for death row prisoners. 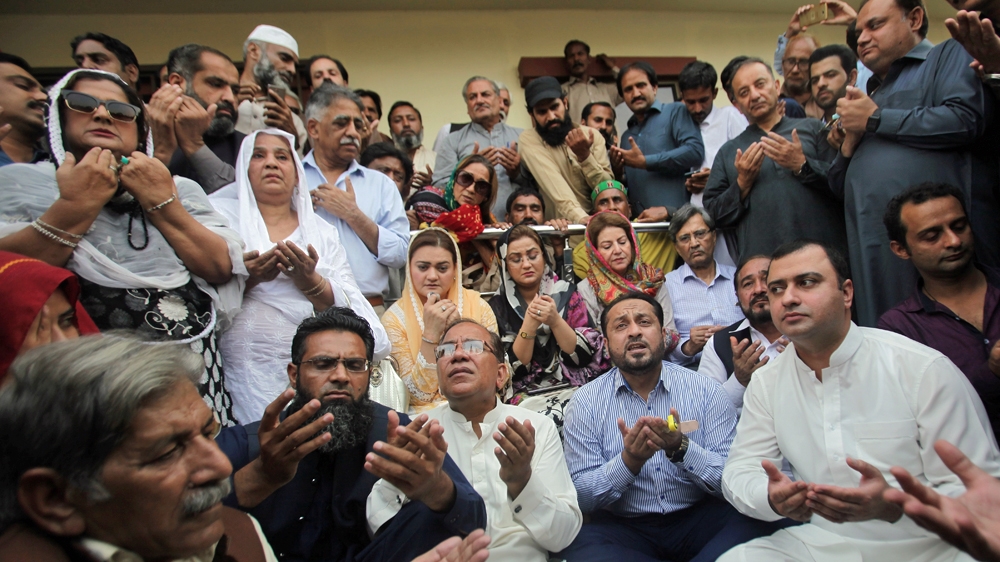 “The struggle began in jail, for his personal doctor to be allowed to attend to him,” said Chaudhry, the PML-N leader.

Sharif’s daughter and political heir apparent Maryam Nawaz Sharif – convicted alongside her father last year but released thereafter after her sentence was suspended – was rearrested in August by NAB as they investigated a separate corruption case.

Maryam Nawaz was also admitted to hospital earlier this week to receive treatment. She was discharged and returned to jail early on Friday.

Both Sharifs have applied for bail on medical grounds with the Lahore and Islamabad High Courts, said Chaudhry.

Hezbollah to speak on Lebanon crisis as economic warning issued

Babri mosque: Here are key arguments made in court