While Indian Prime Minister Narendra Modi avoided any mention of Kashmir in his speech at the United Nations General Assembly, Pakistan’s Imran Khan launched an extraordinary attack on his Indian counterpart, warning of a “bloodbath” in the disputed region.

Khan on Friday said there would be a bloodbath when India lifts its curfew in Indian-administered Kashmir, currently facing an unprecedented security lockdown for nearly two months.

He said any all-out conflict between the two nuclear-armed nations would reverberate far beyond their borders.

“There are 900,000 troops there, they haven’t come to, as Narendra Modi says – for the prosperity of Kashmir … These 900,000 troops, what are they going to do? When they come out? There will be a bloodbath,” he said during an impassioned and at times apparently extemporaneous speech in which he called Modi’s actions in Kashmir “stupid” and “cruel”.

“What’s he going to do when he lifts the curfew? Does he think the people of Kashmir are quietly going to accept the status quo?” said Khan.

On August 5, Modi’s Hindu nationalist government removed the decades-old partial autonomy in the part of Kashmir it controls under India’s constitution and imposed the lockdown to avoid any protest against the move.

India and Pakistan, which have fought two of their three wars over Kashmir,have been locked in a worsening standoff since then. Both claim the Himalayan region in its entirety, but rule over parts of it.

India accuses Pakistan of supporting the Kashmiri fighters who have been waging an armed rebellion against the Indian rule since 1989 – an allegation Islamabad denies. 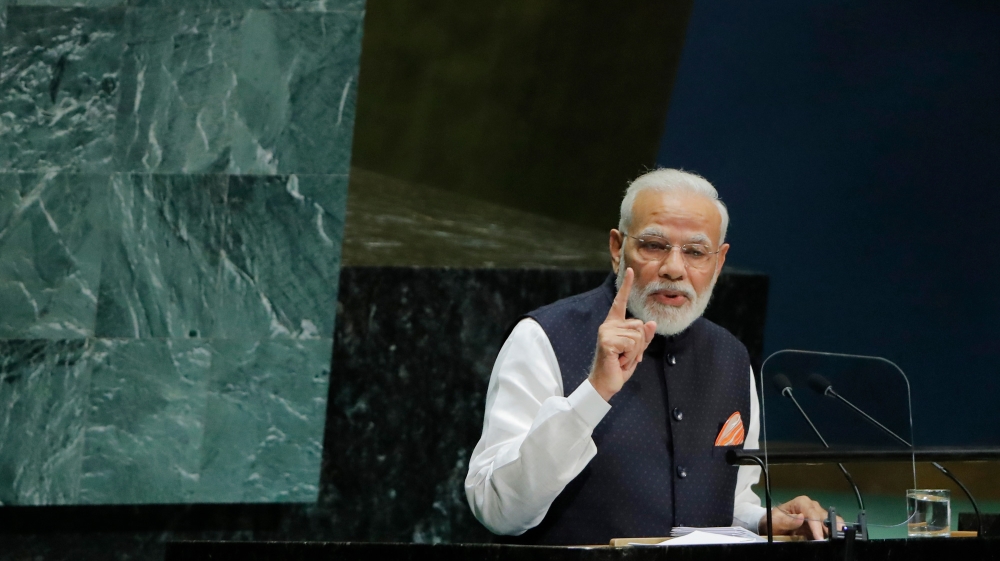 Speaking before Khan at the UNGA, Modi broadly denounced “terrorism” but avoided any mention of his decision to revoke the special status of the Muslim-majority region, also claimed by Pakistan.

In his 15-minute address, Modi told the world leaders that India’s “voice against terrorism … rings with seriousness and outrage”.

“We belong to a country that has given the world not war, but Buddha’s message of peace,” he said.

“Today the message from the world’s largest democracy for the international community is still the same: harmony and peace,” said Modi as he called on the world to “unite against terror”, without going into specifics.

Modi has earlier defended his Kashmir move as freeing the territory from separatism and ensuring its economic development. His supporters have welcomed the move.

Khan warns of ‘risk of war’

In his speech an hour after Modi, Khan repeated his warning that India’s crackdown in the disputed region risks war and urged the UN to act on lifting the 53-day lockdown.

“If a conventional war starts between the two countries, anything could happen,” said Khan. “It’s not a threat, it’s a fair worry.”

Khan asked the UN to act on its resolution passed in 1948, which called for a plebiscite in Kashmir.

“What is the world community going to do?” Khan asked. “Is [the world] going to appease to a market of 1.2 billion or is it going to stand up for justice and humanity?” he said, referring to India’s population.

“This was a deeply impassioned, dark and really quite grim speech by Imran Khan railing against the injustices of the world,” he said.

Hull said India plans to use the UN mechanism of a “right to reply” to Khan’s speech “at some point later today perhaps”.

“India doesn’t want outside eyes on this [Kashmir issue]. We know Modi thinks Kashmir is an internal Indian matter. He doesn’t invite outside scrutiny,” said Hull.

As the two leaders spoke, large duelling protests supporting and opposing India’s action in Kashmir took place across the street from UN headquarters in New York. 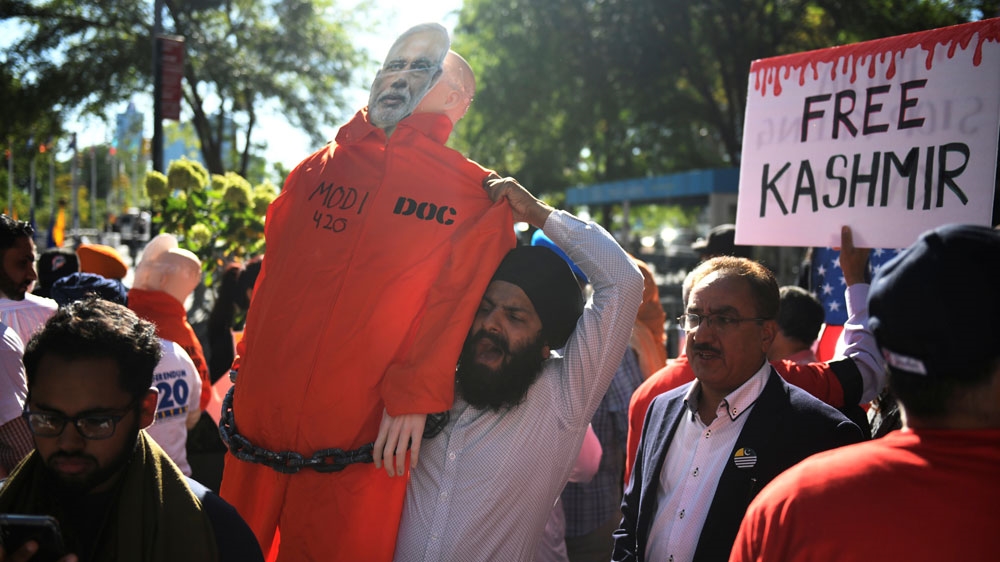 At least 10 infected with coronavirus on Japan cruise ship