Hundreds of people rushed to the base of Uluru in Australia on Friday, the last day before an official climbing ban takes effect on the red rock monolith that is sacred to the indigenous people of the area.

The climb, which usually opens at 7am (21:30 GMT a day before), opened to visitors three hours late after park rangers deemed it was too dangerous because of high winds.

On Friday, hundreds of tourists began moving towards the rock face to make the climb up the 348-metre (1,142 feet) high landmark as soon as it opened.

Some of the visitors told local media they had been lining up since 4am (18:30 GMT on Thursday).

“I’m glad that we’ve sort of travelled all this way to actually get on the rock. It’ll be great. Yeah, can’t wait,” said Katrina Ballinger who was queueing to climb.

“You want to respect the cultural side of things, but still you want to have it as a challenge to get up the rock,” said Sonita Vinecombe, a visitor from the Australian city of Adelaide. 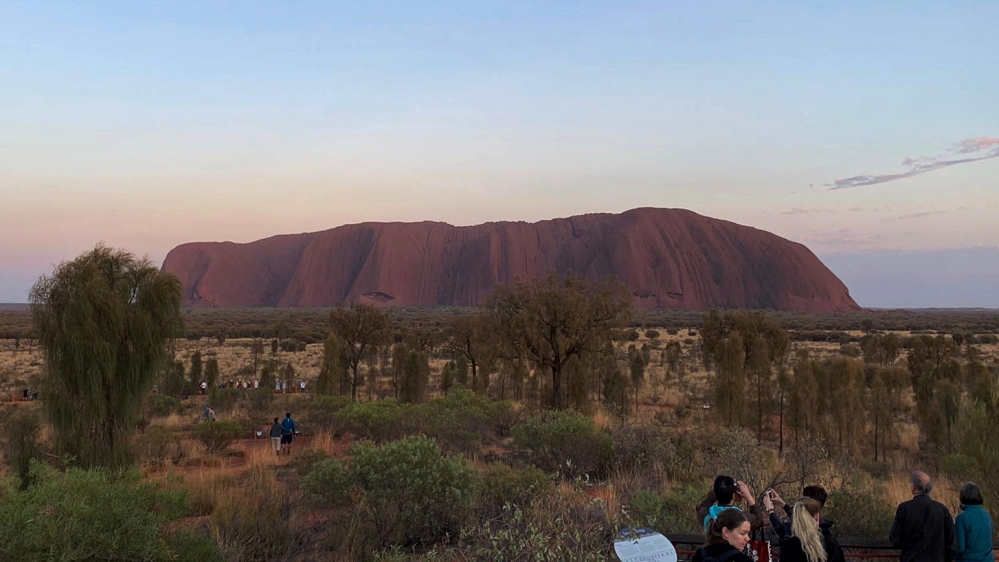 Australia’s ancient rock is revered as a place of spiritual significance.

The indigenous Anangu community has been asking visitors not to climb Uluru since 1985 when the government returned the land title to it. Park authorities announced two years ago that a formal ban would come into force this month.

The decision to ban climbing was made by the 12 members of the Uluru-Kata Tjuta National Park Board of Management and was unanimous. At that time about 20 percent of visitors would make the climb.

“This is our Tjukurpa [our cultural inheritance], our law and our stories, from long ago,” said Sammy Wilson, a traditional owner and the chair of the board of joint management of the Uluru Kata Tjuta National Park.

“It is an extremely important place, not a playground or theme park like Disneyland.”

Theresa Nipper, another board member and local Anangu elder, said in the video statement: “We’ve always been waiting for this rock to close.”

“Now it’s closing and we’re really happy, everyone,” she said, adding that Uluru has always been sacred for the local community and stepping on it is “hurting the rock”.

From Saturday onwards, it will be illegal to climb the rock, with penalties ranging from fines of at least 630 Australian dollars (US$427) to potential jail time.

American tourist Kathleen Kostroski said she would not climb because it would be “sacrilegious” to do so.

“It’s a violation against mother nature, first of all and secondly, against the aboriginal indigenous people here,” she said.

The already difficult climb, due to the slippery slope, will be extremely hard without the 300-metre-long chains that are currently attached to 138 steel posts. They were set up in the 1960s and will be removed next week.

In recent months, tourists have flocked to the region in a last ditch attempt to make it to the top, with an average of nearly 10,000 extra visitors a month, according to park authorities.

Australia’s Indigenous Affairs Minister Ken Wyatt said he was disappointed by the large numbers who had rushed to climb Uluru.

“I understand there are people that want to put it on their bucket list. It would be equivalent to having a rush of people wanting to climb over the Australian War Memorial,” he told Australian radio ABC on Friday morning.