Since late February, Algerians have been relentlessly taking to the streets every week to demand a political overhaul – and, it seems, they have no plans to let up.

As the country’s protest movement entered its seventh month, demonstrators on Friday gathered in Algiers and other major cities to call for the removal of the ruling elite, shouting slogans such as “free and democratic Algeria” and a “civil state, not a military one”.

The protesters’ anger was directed at army chief Ahmed Gaid Salah, a key powerbroker since longtime President Abdelaziz Bouteflika resigned in April in the face of the mass protests.

They also vented their ire against Karim Younes, a former speaker of the lower house appointed by authorities to head a national dialogue to pave the way for presidential elections.

“Karim Younes does not represent us and Gaid (Salah) does not rule us!” the demonstrators chanted. “We will not be fooled by any dialogue. The people are conscious. They are not idiots,” they shouted.

Protesters in Algiers dispersed calmly late in the afternoon, as did those demonstrating in other key urban centres, according to reports.

Angry at unemployment, corruption and an elderly elite seen as out of touch with the young, Algerians have taken to the streets since February 22 to protest, initially against ailing Bouteflika’s plans to remain in office, and then for the removal of all remnants of a secretive political and military establishment that has dominated the country for decades.

Polls planned for July 4 were postponed, after the only two candidates – both little-known – were rejected by electoral authorities.

The demonstrators have repeatedly demanded key figures of the ruling elite step down and credible institutions be established before elections are held. 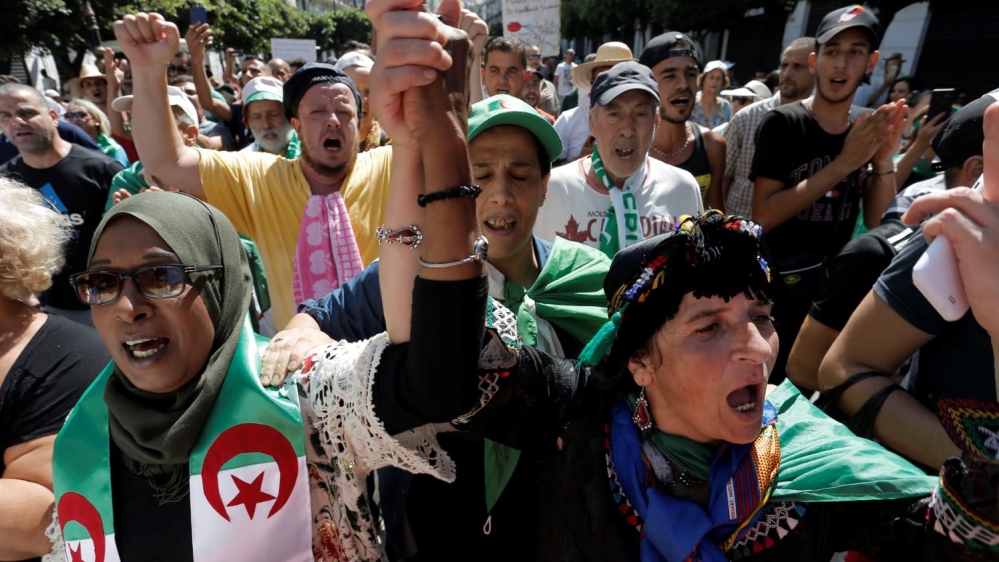 Protesters shouted slogans such as ‘free and democratic Algeria’ and a ‘civil state, not a military one’ [Toufik Doudou/AP]

Last month, Abdelkader Bensalah, Bouteflika’s interim successor, proposed a national dialogue without state or military involvement. But only a few opposition parties have so far agreed to meet Younes and his dialogue committee, including a party headed by former Prime Minister Ali Benflis.

Last week,Benflis said that presidential elections were the only way of emerging from the political crisis, as long as the polls were free and fair.

But on Friday, the demonstrators rejected his views, chanting “benflis to the rubbish bin”.

Friday’s rally began after demonstrators observed a minute of silence for five young people who were killed late on Thursday in a stampede at a packed rap concert in Algiers.

Dozens more were injured in the crush as fans thronged an entrance to the August 20 Stadium, before a performance by Soolking, a rapper who has dedicated the song “La Liberte” (or Freedom) to the protest movement.

“We were supposed to celebrate six months of (rallies) today but yesterday’s tragedy has plunged many families into mourning,” protester Lamia Boukahari was quoted as saying by the AFP news agency.

She said the concert’s organisers should be “held to account”, noting that the stadium was old and too small to accommodate the more than 30,000 people estimated to have attended.

Another protester said the deaths of the young concert goers reflect the corruption prevailing in Algeria.

A string of prominent politicians and businessmen once close to Bouteflika have been questioned or arrested over alleged fraud since the ailing former president stepped down.

Omar al-Bashir on trial: Will justice be delivered?

Prince William urges UK to pull together during coronavirus outbreak

Turkey’s military operation in Syria: All the latest updates

WHO to hold virtual global meeting on COVID-19 today