The 85-year-old leads the National Socialist Council of Nagalim – Isak Muivah (NSCN-IM) – northeast India’s largest rebel outfit with an estimated 5,000 to 15,000 members fighting for independence for more than four decades.

NSCN-IM, formed in 1980, along with other armed groups based in Nagaland – a Christian-majority state – wants all Naga people unified in a new sovereign state called Nagalim.

But the August 5 decision by the Indian government to scrap Article 370 of the constitution that granted Indian-administered Kashmira measure of autonomy has triggered anxieties across the northeast region.

Nagaland is safeguarded by Article 371A, which exempts it from following Indian laws.

Seven northeast states, including parts of Assam state, are protected under various clauses of Article 371.

“India’s Kashmir decision [was taken] without respecting the history of the Kashmiris. [It] is not acceptable to us,” he said.

Although India’s hardline Home Minister Amit Shah has reassured regional leaders in the northeast that Article 371 will not be scrapped, rebel groups fear that the current Hindu nationalist Bharatiya Janata Party (BJP) government may dilute these constitutional provisions as part of its “one nation one constitution” vision.

NSCN-IM, which signed a ceasefire deal in 1997, wants Nagalim to include all Naga-majority areas straddling across Manipur, Assam and Arunachal Pradesh states, as well as a part of western Myanmar across the border.

In 2015, the rebel group led by Muivah signed a 16-point framework agreement with Prime Minister Modi and interlocutor RN Ravi but talks aimed at arriving at a political solution has dragged on.

Muivah, who is based at Camp Hebron, the headquarters of the self-styled Government of the People’s Republic of Nagalim, has expressed concerns at talks. 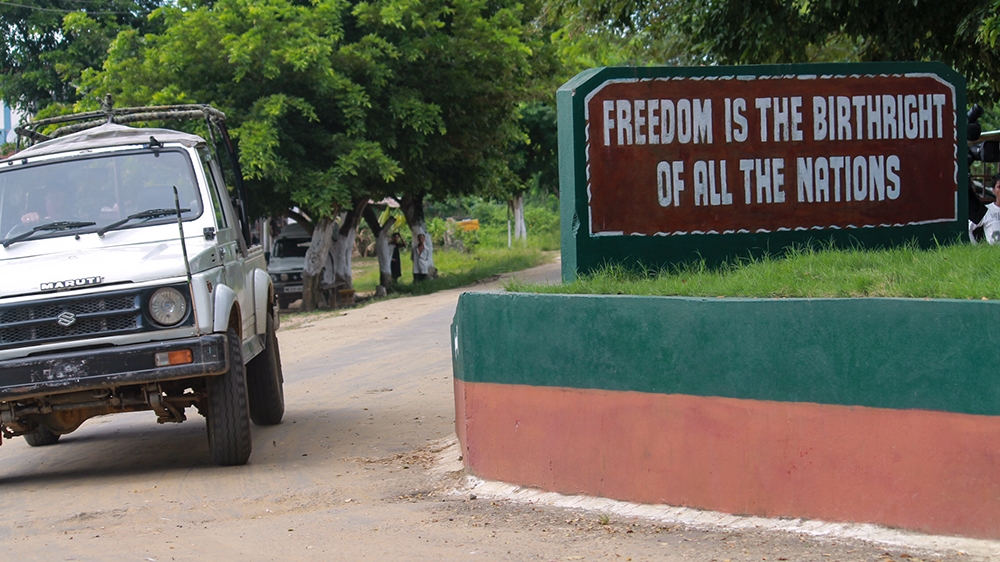 Speaking from the camp spread across 81 hectares (200 acres) in Peren district of Nagaland, he said the Indian government was backtracking on the question of Nagaland’s sovereignty, a separate constitution for the state and a flag for the Nagas.

“Suddenly, they want the Nagas to come within the union of India. This came as a surprise to us,” he told Al Jazeera. “Sorry, but that is not possible.”

In 1980, the NSCN-IMbroke away from the first armed group formed in the 1960s, the Naga National Council, after a group of leaders signed the Shillong Accord in 1975, accepting the constitution of India, without condition.

Prior to the accord, a group of leaders led by Muivah had fled to China where they were believed to have been trained by the People’s Liberation Army.

While no definitive figures are available, the armed rebellion has cost lives running up to thousands, including civilians and Indian armed forces personnel.

Since the framework agreement was signed, speculations have been rife over the kind of Naga sovereignty being negotiated.

Alex Waterman, a research fellow at the University of Leeds, said that bilateral talks have suited New Delhi’s interests.

“This meant the [Naga] parties were divided and couldn’t bring combined clout to the negotiating table,” he told Al Jazeera referring to divisions among rebel ranks.

“It also suited the NSCN-IM, as it has needed to be able to stake the claim that its peace process is the only legitimate one to fend off rival factions and consolidate its ‘government’ in its areas of influence.”

But now, Muivah alleges, the government has gone back on its commitment.

Despite repeated requests, government interlocutor and current Nagaland Governor RN Ravi declined to give a comment to Al Jazeera.

On the face of it, NSCN-IM demand for an integrated Nagalim goes head to head with Modi’s vision of “one nation one constitution”.

Soon after independence from Britain in 1947, India integrated about 500 provinces and princely states but some of them joined on the condition that they would be accorded special rights. Hence India’s constitution guaranteed limited autonomy to some northeast states as well as disputed Kashmir region.

“Our federalism is asymmetric as there are special constitutional provisions for different states. However, keen on forging India as a unitary state, the present political dispensation in Delhi seeks uniformity in dealing with all the states of the union in the same manner,” he told Al Jazeera.

The Indian National Congress (INC) party, which dominated the politics of the state for decades, has been accused of dragging its feet on the issue.

But K Therie, president of the Congress party in Nagaland, said that the party “gave us full statehood and protection under 371A”.

“Now even separate flag and constitution are ruled out. We fear that Article 371 will also be removed,” he told Al Jazeera.

But the current state government, which runs in coalition with the BJP, has resolved to continue “facilitating” the peace process.

Mhonlumo Kikon, a BJP member of Legislative Assembly and Advisor to the Government of Nagaland, said the government is ensuring whatever legislative or public support needed for the solution.

“We are in constant consultation with Naga civil society and all possible stakeholders,” he told Al Jazeera.

The Modi government has set October 31 deadline to arrive at a solution but with many issues still remained to be ironed out, the possibility of a final deal looks remote.

Seven other Naga groups, who are also part of the talks, are open to signing the deal, but NSCN-IM is adamant on a separate flag and constitution.

Experts fear that any accord signed without consensus may fail, such as the Shillong Accord.

Oscar Fernandes, a former minister in the Congress government who was part of negotiations in the early 2000s, said that the talks would get stalled at the integration of so-called Naga contiguous areas within India.

States of Manipur, Assam and Arunachal Pradesh are opposed to ceding their Naga areas to the future Nagalim state.

“I can’t comment on what the government has in store for them. But I hope the solution comes once and for all,” he told Al Jazeera.

Muivah said he is confident that he can work it out with parties with apparently conflicting interests. True to their motto, he asks to repose faith in the Lord above all else.

“Nagalim is for Christ, so we will not betray. If we betray, God will no longer be with us.”