Istanbul, Turkey -At 1:14pm, a minute of silence was observed by Jamal Khashoggi’s fiancee and close friends outside the Saudi consulate in Istanbul.

The time precisely marked the journalist’s entry into the building on October 2 one year ago, where he was met by a team of Saudi agents who killed him and dismembered his body.

Khashoggi’s Turkish fiancee Hatice Cengiz was one of the speakers to address an audience of dozens heavily guarded by police and military personnel.

“He was my best friend,” Cengiz said. “Last year today, I was standing here, I was a girl in love, waiting for my man to come out of the consulate, we wanted to go to dinner, we wanted to invite friends to our wedding.

“I stand here broken … I want to know what happened to his body,” Cengiz continued.

The anniversary vigil was attended by human rights and media freedom activists, as well as theUN Special Rapporteur on extrajudicial killings Agnes Callamard and Jeff Bezos, the owner of The Washington Post, the US publication for which Khashoggi was a columnist.

Callamard, who concluded in a June report that the state of Saudi Arabia was responsible under human rights law for the extrajudicial killing, gave a moving speech in memory of Khashoggi, reminding his friends and colleagues that justice would be served.

“We gather here together to hold our light high, our light is our demand for justice, and that will not be dimmed,” Callamard told the crowd in the Turkish city.

“Impunity’s darkness must not win … lest we all fall under its toxic shadow … no one should get away with murder, no matter who they are … not even a state as powerful as Saudi Arabia.”

Callamard’s report also found that the killing was a “deliberate, premeditated execution” and that there was “credible evidence, warranting further investigation of high-level Saudi officials’ individual liability, including the crown prince [Mohammed bin Salman, or MBS]”. 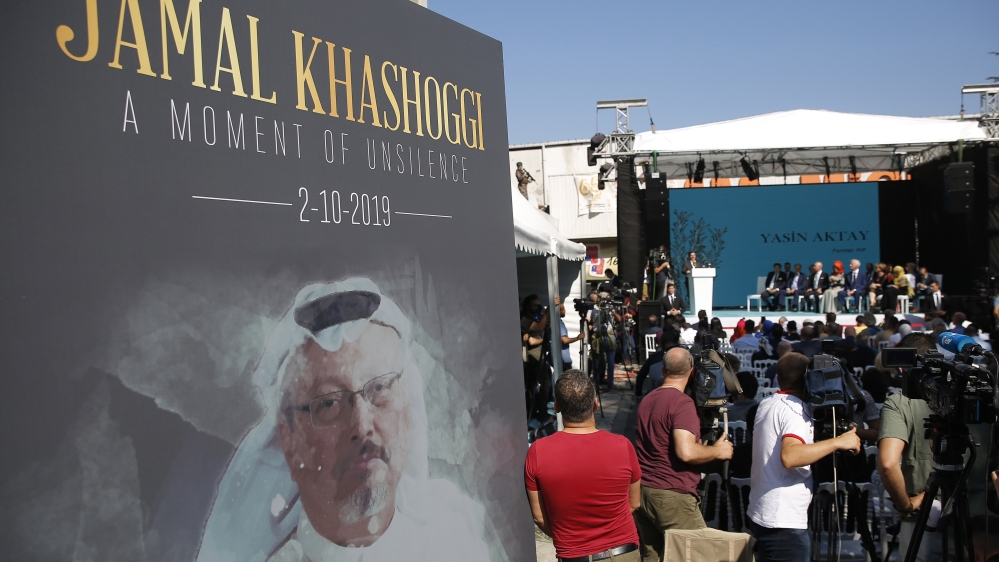 The CIA has reportedly concluded that the killing was ordered by the crown prince, whose domestic and foreign policies Khashoggi had criticised in his columns.

While Prince Mohammed, Saudi Arabia’s de facto leader, has kept a relatively low profile since Khashoggi’s murder, he addressed the issue in two interviews with US media outlets last week, in which he denied ordering the killing, but said that as the leader of the country, he bears responsibility as it happened on his watch.

Saudi Arabia has put 11 suspects on trial in the kingdom, with the country’s prosecutor seeking the death penalty for five men, though proceedings are closed to the public and remain shrouded in secrecy.

In a statement on Wednesday, Amnesty International demanded the Saudi authorities to immediately allow independent monitors into the trial.

“Without which it would simply be another sham trial that fails to hold accountable all those responsible for the order and implementation of the killing,” Lynn Maalouf, Amnesty’s Middle East director of research, said.

She added that it would be a “violation of the right of the family and the wider Saudi public to know what happened to Jamal Khashoggi ‘under the watch’ of Mohammed bin Salman.” 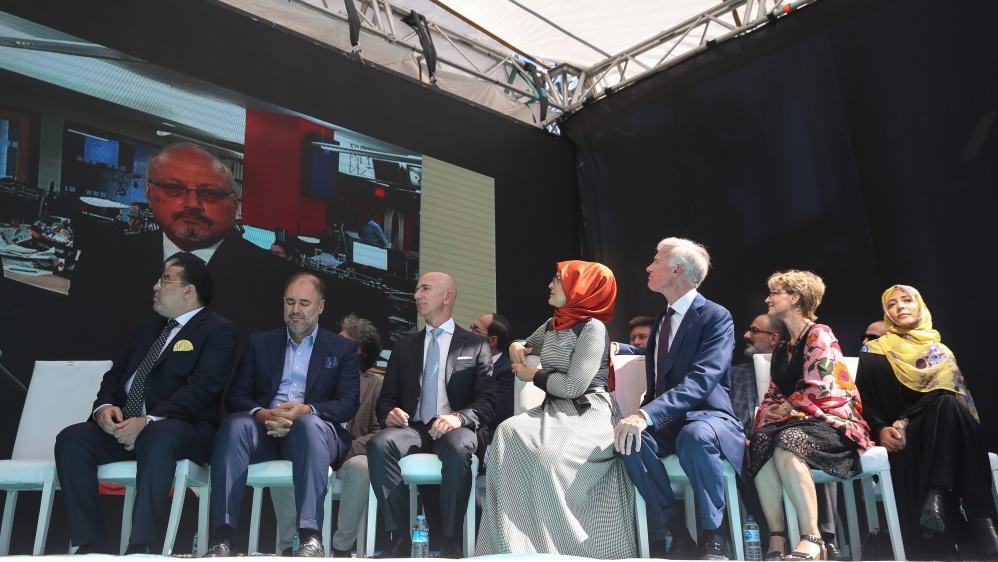 ‘He will never die’

Khashoggi was remembered by all in attendance as a beacon for freedom of thought and someone willing to stand up to his beliefs no matter what power was in front of him.

Turan Kislakci, president of the Turkish-Arab Media Association, condemned the kingdom for allegedly obstructing the investigation into Khashoggi’s killing.

“This wonderful human was killed twice, first when he was murdered … then through the barbarian and immodest claims after his death,” Kislakci said.

“[But] he will never die, he will live in the consciousness of humanity.”

Many of those in attendance also raised the issue of increasing persecution and killing of journalists globally, particularly in the Arab world.

Wadah Khanfar, former director general of Al Jazeera Media Network and president of Al Sharq Forum, declared Khashoggi’s death as the beginning of the second phase of the Arab Spring.

“They wanted him to disappear, but the image of his voice, is chasing them everywhere,” Khanfar said.

“The best allies for revolution, are dictators because they are very very stupid, and the ones we have in the Arab world have extra stupidity.”

The ceremony concluded with the unveiling of a memorial stone for Khashoggi at a green space near the building. Last month, Turkish media reported that the kingdom had over the summer sold the consulate building in Istanbul and the diplomatic mission would soon be moving to a new location.

Prince Harry, Meghan to have a tough time with privacy in LA: expert

Virus hope in US as WHO hails global progress