United Nations, New York City– As the Climate Action Summit wrapped up at the United Nations in New York City on Monday, environmental activists almost universally concluded that not enough had been done to stop global warming and stem the climate crisis.

Despite some significant commitments from small and medium-sized countries to limit emissions – and a few other notable announcements – the long-heralded gathering lacked any big moves by major nations.

A total of 66 countries enhanced their national pledges to curtail greenhouse gas pollution, but those states representedbarely one-fifteenth of world emissions.

French President Emanuel Macron said in his address that the European Union would work towards more ambitious targets by early next year, and India’s Prime Minister Narendra Modi declared that his country was striving for an unprecedented amount of renewable energy.

“For the most part, world leaders did not deliver what was needed in New York today,” said Greenpeace International’s Executive Director Jennifer Morgan.

“We saw millions of people pour on to the streets on Friday, making it clear they will no longer accept apathy, excuses and inaction from weak political leaders incapable of standing up,” Morgan added.

She said it is “time to address corporate power and the hold it has over politics” and it is “time to stare down the fossil fuel industry and the banks that finance them, challenge their suffocating omnipresence and demand they take responsibility for the human rights impacts of the climate crisis.”

‘Running out of time’

Helen Mountford, the vice president for climate and economics at the World Resources Institute, said that the growing demand for action has resulted in a flurry of private-sector and investor actions.

While she said there was a lack of “climate leadership” from many of the biggest emitters, on a call with reporters, she praised the “realisation of the need to shift to a low-carbon economy”.

She said Russia had just announced its ratification of the 2016 Paris Agreement, and noted that “30 countries, 22 states and 31 corporates have committed to powering past coal”.

“Good intentions and recycled commitments will not protect the millions of people on the front lines of the climate crisis,” said Byanyima.

“This largely disappointing set of outcomes from the Climate Action Summit raises the stakes even higher for the upcoming COP25 and 2020, when leaders have another chance,” she added.

“We cannot keep pushing these decisions down the road. We are running out of time,” she said, adding that “the young climate leaders have made it clear that they will not stop until they see action.”

Shortcomings on Monday were blamed on national politics that prevented some countries from moving forward.

Laurence Tubiana, CEO of the European Climate Foundation, said at a press briefing, “You cannot be on track for 2050 if you don’t do a number of things immediately … at the domestic level to say what trajectories the countries can take.”

Tubiana complimented the “connections between governments and progressive activists”.

“This is a win,” she told Al Jazeera.

“The UN secretary-general was so clear, so courageous in historically demanding what is needed – and not compromising,” she added. “That is a new thing in the UN system. It sets the bar … for some countries and companies and cities.”

But many climate advocates said that governments were simply not acting at the level necessary for dealing with the climate emergency.

“World leaders say they know ‘our house is on fire’, but they are adding more fuel to the flames,” said May Boeve, the executive director of 350.org.

Despite this, Boeve said that “over the last few months, there has been a tectonic shift in climate politics.”

“The climate strikes are having an impact,” she said. “Momentum is on our side and what we’re seeing today is politicians stumbling over themselves to catch up.” 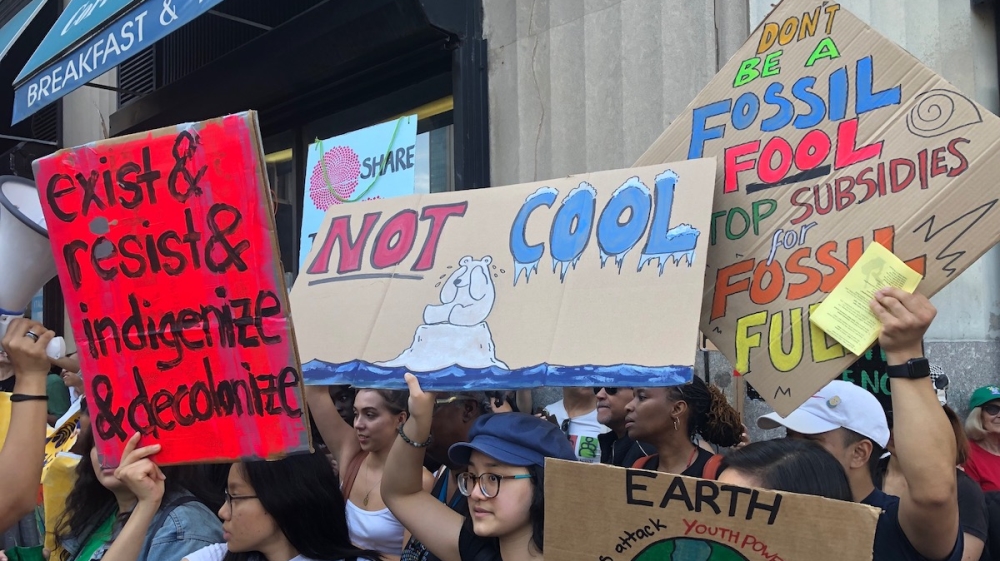 Student climate strikers took to the streets on Friday in more than 4,500 locations around the world [Ben Piven/Al Jazeera]

She pointed to protests this morning in Washington, DC, as well as ongoing actions this week across the US and Europe. Boeve also said that protests next Friday would occur in Canada, Spain, Italy, New Zealand and other countries.

Other groups also plan to hold actions this week centred on climate. On Tuesday, a delegation from Brazil, supported by Amazon Watch, is expected deliver a petition with nearly 240,000 signatures to the headquarters of BlackRock – the world’s largest fund manager – to protest the company’s investment in industries contributing to deforestation of the Amazon, as well as the policies of Brazil’s President Jair Bolsonaro.

And while heads of state meet on Tuesday and Wednesday at the General Assembly and Sustainable Development Goals Summit, dozens of activists and civil society organisations are set to hold a parallel People’s Assembly to demand world leaders take urgent action on climate justice and inequality.

Harjeet Singh, ActionAid’s global lead on climate change, said Monday’s “summit was supposed to be a turning point, but we have seen an exceptional lack of commitment from the biggest and richest polluting countries that continue to take trivial measures towards solving a life or death crisis.”

Singh added, “the countries that have responded with the most concrete actions are the ones most vulnerable to climate impacts.”

What is the ideal heart rate when running?

‘State of mourning’ in Burkina Faso after attack kills dozens

Iraqi Parliament Calls for Expulsion of US Troops