A journalist who went missing in the Maldives five years ago was killed by a group formerly affiliated with al-Qaeda, an investigator has said, publicly acknowledging for the first time al-Nusra Front’s presence and efforts to silence liberal voices in the Indian Ocean island nation.

Ahmed Rilwan Abdulla, whose disappearance in 2014 shook the Maldives, was forced into a car at knifepoint outside his home on the island of Hulhumale and taken to a boat out at sea where he was murdered, said Husnu Suood, the head of a presidential commission set up to investigate the case.

Speaking to reporters on Sunday, Suood said the commission’s nine-month investigation found then-President Abdulla Yameen and his deputy may have obstructed the police investigation into the journalist’s disappearance.

In a statement, Rilwan’s family said it heard the commission’s conclusion with “deep sorrow” and called for protection for witnesses in the case.

Officials in the Maldives, a popular Indian Ocean holiday destination, have previously denied the existence of hardline Islamic groups in the Sunni Muslim state, despite a spate of attacks against people advocating the practice of moderate Islam or freedom of belief.

The attacks include the killing in 2017 of a prominent blogger, Yameen Rasheed, who led a campaign to find Rilwan.

“Those who organised and financed Ahmed Rilwan’s abduction and Yameen Rasheed’s murder are the same,” Suood, a former judge, told a press conference in the Maldives’ capital, Male.

“We have to root this group out. They are dangerous.”

The inquiry commission was set up by President Ibrahim Mohamed Solih, who assumed office last year vowing to fight corruption and free politicians jailed under his predecessor Yameen, who presided over a wide-ranging crackdown on dissent during his five-year rule. 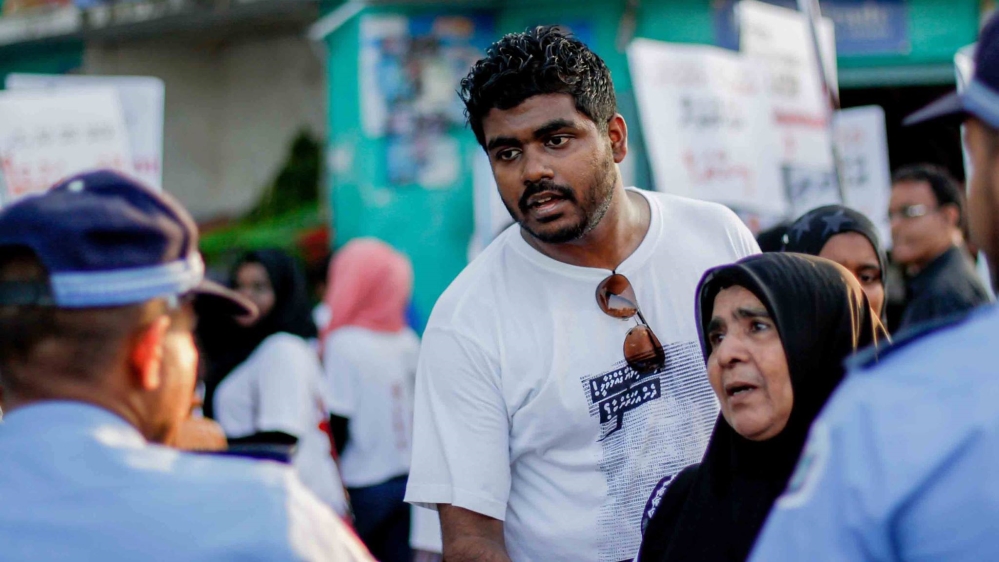 Yameen Rasheed (l), who led a campaign to find Rilwan, was murdered in 2017 [Courtesy of Find Moyameehaa campaign]

Rilwan worked for Minivan News, an English news website now named The Maldives Independent, and was long known to the al-Nusra Front because of his blog posts about al-Qaeda’s presence in the Maldives and his participation in a 2011 protest calling for freedom of belief in the Maldives, said Suood.

The demonstration was attacked, with counter-protesters hurling rocks and wounding several people.

“After the confrontation, the Jihadi hardline group compiled a hit list of people they believed were mocking religion and began issuing death threats,” said Suood.

A year later, in 2012, one writer who participated in the rally had his throat slit while another fled the country fearing for her life. A legislator, a well-known Islamic scholar, was also hacked to death in his house.

Police failed to investigate the first two cases, while investigation into the politician’s death is ongoing.

Rilwan’s disappearance two years later set off a wave of protests in Male, with his family accusing officials in Yameen’s government of complicity. Police cracked down on the campaign, pepper spraying his mother and arresting his brother at one protest.

The Maldives Independent’s office was also attacked, with a machete lodged on its door. Several of Rilwan’s friends reported receiving death threats.

Weeks before his abduction in August 2014, the 28-year-old journalist wrote a series of reports on Maldivians joining armed groups in Syria’s war, said Suood. Rilwan contacted one of the Maldivian fighters in Syria seeking comment for a report and was told “your days are short”.

The fighter, identified as Yameen Naeem, accused Rilwan of being an apostate and of passing information to Maldivian police and others on the al-Nusra Front’s recruitment efforts in the Maldives, said Suood.

Naeem was killed in Syria in September 2014.

Scores of Maldivians have travelled to Syria and Iraq to join the former al-Qaeda affiliate as well as the Islamic State of Iraq and the Levant (ISIL, or ISIS). But officials of Yameen’s government said the cases were isolated, describing allegations of ISIL and al-Qaeda recruitment in the Maldives as an effort by the then-opposition to damage the country’s lucrative tourism industry.

Suood said the two groups targeted disaffected young men in the Maldives. Their recruitment effort was financed by a vast network of businesses, including cafes and shops selling fabric and groceries.

That included two young men who were caught on camera following Rilwan on the night he went missing.

The pair were arrested over the case in September 2014 but released weeks later at the intervention of the then-tourism minister Ahmed Adeeb, who was appointed the Maldives’ vice president a year later, said Suood, citing text messages obtained from the former official’s phone.

“Based on these facts, we are recommending charges of obstruction of justice against Ahmed Adeeb,” he said.

“We also have evidence that then-President Abdulla Yameen attempted to divert the focus of investigation,” he said, alleging the former leader had the police consult a sorcerer to find out Rilwan’s whereabouts. 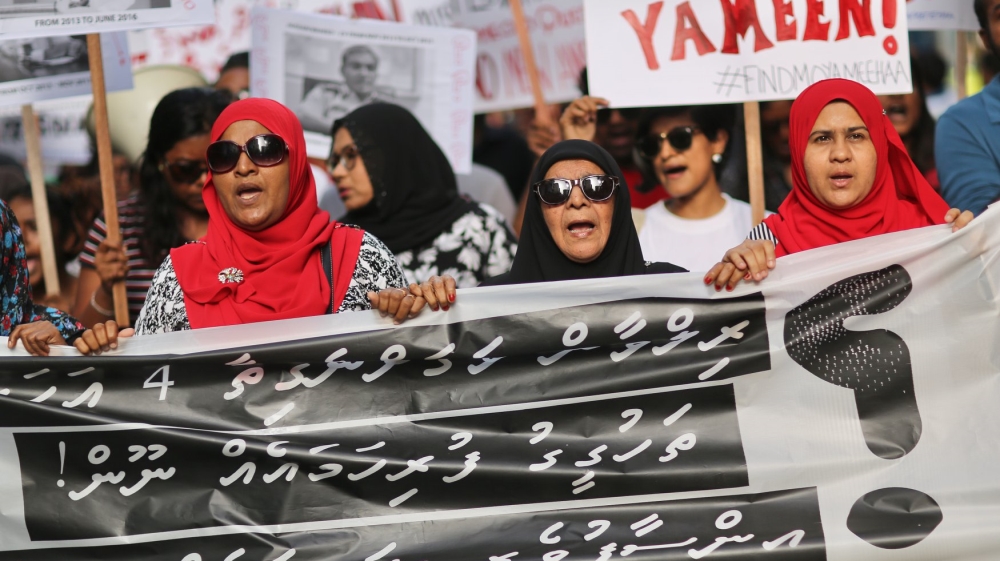 Rilwan’s family called for accountability for all those involved in his disappearance [File: Sharif Ali/ Al Jazeera]

“No need to be overwhelmed by Rilwan case,” Yameen told the home minister Umar Naseer in a text message obtained by Al Jazeera.

Naseer confirmed receiving the message after initially denying it.

Al Jazeera reached out to Yameen and Adeeb but did not receive a response at the time of publication.

Yameen and Adeeb, who are on trial on charges of money laundering, have previously denied involvement in the disappearance.

On Sunday, Rilwan’s family called for prosecution of all those linked to his killing, “including those who organised and financed” the murder, as well as “senior government officials who obstructed the investigation”.

Bill, Melinda Gates announce divorce as ‘they can no longer grow as a couple’