On the day before his five children were due to appear in front of a tribunal in India’s northeast state of Assam to prove they were genuine citizens, Rahim Ali hanged himself outside their corrugated metal shack in the village of Banti Pur in Barpeta district, his wife said.

He was worried the children would be excluded from a government citizens list set to be published on Saturday, said Halimun Nessa, standing over Ali’s fresh grave. He had feared they would be sent to a detention camp.

“He was saying we don’t have any money to fight this case,” Nessa, 32, told Associated Press. “He was thinking that his children will be taken away. He went to the market, came back and did this,” said Nessa, adding that she does not know what she will do if her children’s names do not appear on the National Register of Citizens, or NRC.

The Supreme Court-monitored NRC process started in 2015 and a draft NRC list was published last year that excluded more than four million of Assam’s 32 million people.

Critics fear the final NRC list will leave off millions of people, rendering them stateless. And the Hindu nationalist-led government of Prime Minister Narendra Modi, which fully backs the citizenship project in Assam, promises to roll out a similar plan nationwide.

The government has assured that people left out from the final list will be given an opportunity to prove their citizenship. But the people who are anxiously waiting for the lsit to be released, are worried. 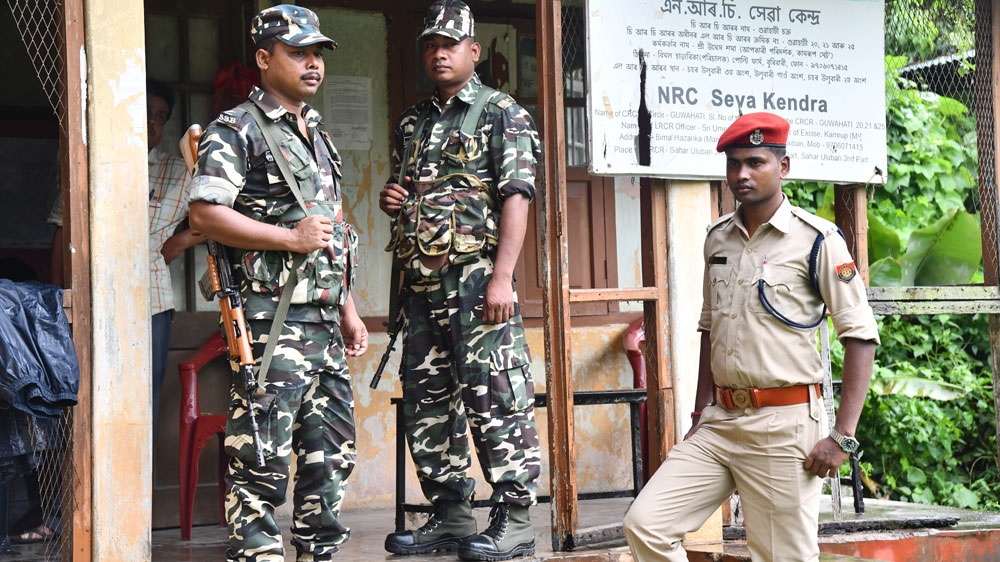 Habibur Rahman and his wife Aklima Khatun along with their sons Nur Alam and Faridul Alam were among the four million left out of last year’s draft list. Their two daughters, Samira Begum, 14, and Shahida Khatun, 11, however, were able to make it onto the list.

They have submitted documents again as part of the appeal process.

“I was never worried like this. This is the biggest test of my life. If our names are not featured in the final list, what do we do?” a concerned Rahman told Al Jazeera from Goroimari village in Kamrup district – over 66 kilometres from the state capital Guwahati.

Those suspected of being in the country without documents must prove their citizenship under what is seen as a messy, overly-bureaucratic system.

A section of people, mostly Muslims, complained of harassment from NRC officials as they were summoned at short notice and made to travel up to 400-500km from their homes for hearings.

“We did everything we were asked to do to prove we are Indians. We felt like it was the end of our world,” Bahatan Khanam, 35, said.

I am very shocked that I served 30 years to the nation, now I am a beggar for citizenship

Khanam from remote Dakhin Godhani village in Barpeta received the notice on August 5 and she was asked to attend the hearing on August 6 in Golaghat district, which is located some 400km away.

“Now, I just hope that my name appears in the list. That’s the ultimate dream anyone can have. We have been long waiting for this day. If the name appears, I hope to lead a dignified life as an Indian and if it doesn’t the struggle will continue,” Khanam told Al Jazeera.

Critics view the NRC process as an attempt to deport millions of minority Muslims, many of whom have entered India from neighbouring Bangladesh. 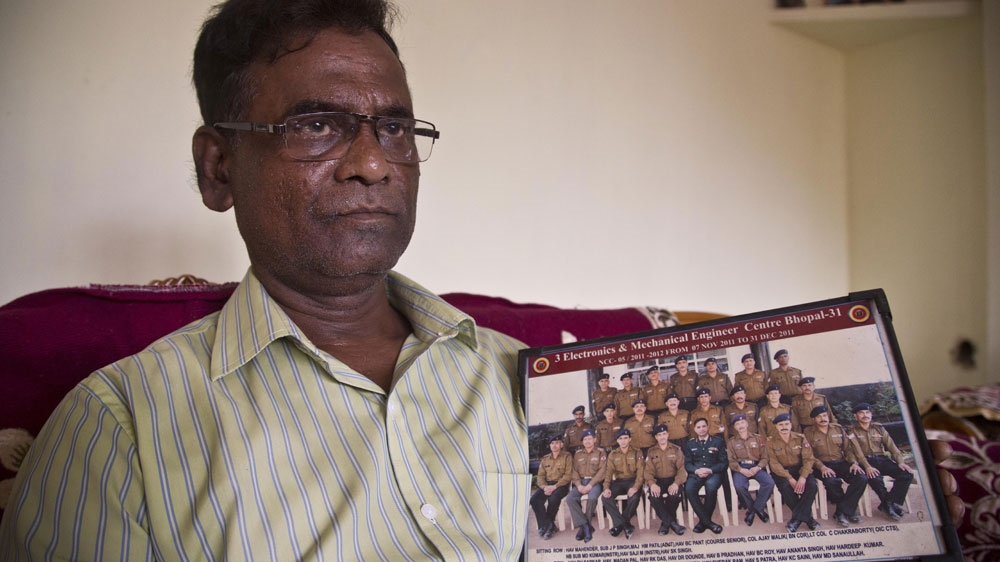 ‘I am very shocked that I served 30 years to the nation, now I am a beggar for citizenship,’ said Army veteran Sanaullah [Anupam Nath/AP Photo]

People like Rahman are worried. “I have submitted all the documents that were necessary. We have land papers in our father’s name that dated back to 1948. What else do we need to prove our citizenship?” asked Rahman.

India’s government sought to ease concerns ahead of the imminent “citizens register”.

“DO NOT BELIEVE RUMOURS ABOUT NRC,” a spokesperson for the Indian home ministry tweeted in capital letters.

Tens of thousands of paramilitary personnel and police have been deployed ahead of the publication of the citizens list.

Police said 60,000 state police and 19,000 paramilitary personnel will be on duty on Saturday, according to Reuters.

But those who have been leading the fight for such a list say the project is meant to protect the cultural identity of Assam’s indigenous people, no matter what their faith is.

Those excluded are presumed to be foreigners unless they can prove otherwise at one of the hundreds of quasi-judicial bodies known as Foreign Tribunals presided over by people who are not judges.

They have 120 days to file appeals with the tribunals and can take their case to higher courts. If no appeal is filed, a district magistrate makes a referral to the tribunal to strip them of their citizenship.

It is unclear what will happen to those ultimately branded as foreigners because India has no treaty with Bangladesh to deport them. 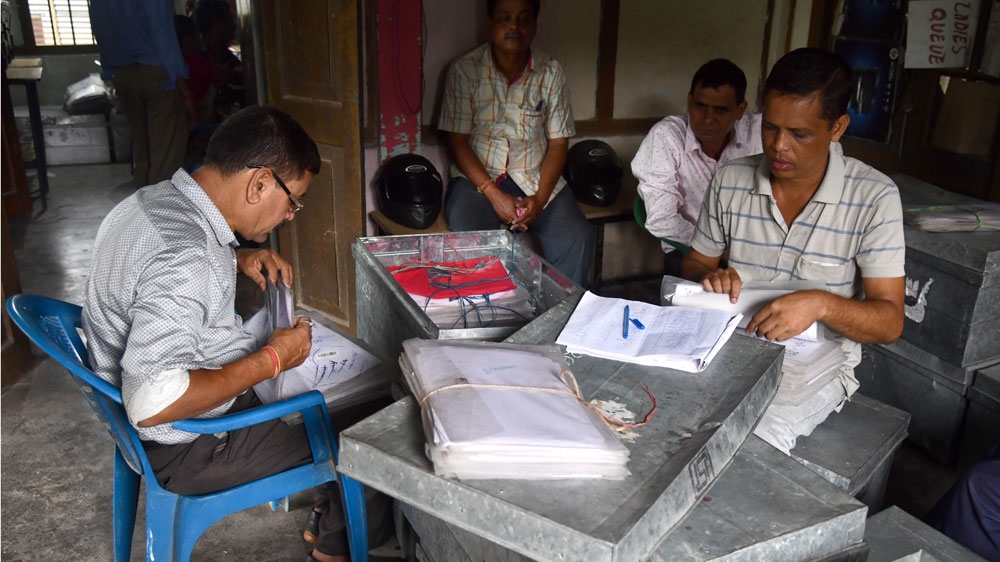 Earlier this summer, India’s Supreme Court criticised the central government and that of Assam state, saying thousands of people who had been declared foreigners over the years had disappeared. About 1,000 others are being held in six detention centres located inside existing prisons.

For hundreds of years, the verdant, hilly state of Assam has drawn workers from neighbouring Bangladesh to its enormous colonial-era tea plantations.

But resentment of these immigrants runs deep. In 1983, a mob in Assam massacred more than 2,000 Bengali-origin Muslims. No one was ever prosecuted.

Millions of people whose citizenship status is now unclear were born in India to parents also born in India. The year 1948 was decreed to be the official cutoff date for refugees from Pakistan, including East Pakistan – now Bangladesh. The date was later updated to 1951 when the first NRC was prepared.

According to a 1985 deal signed between the central government and Assam politicians running a campaign against undocumented immigrants, March 24, 1971, was set as the final cutoff date to be eligible to be granted Indian citizenship.

Hundreds of people with voting rights of diverse lineage, including Hindus and Assamese, have been arrested and held on suspicion of being undocumented migrants. 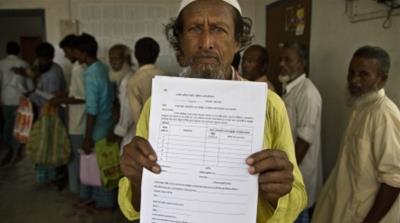 Kismat Ali, whose wife’s name did not appear on the NRC draft, shows a form he collected to file an appeal near Guwahati [Anupam Nath/AP Photo]

“I am very shocked that I served 30 years to the nation, now I am a beggar for citizenship,” said Army veteran Mohammad Sanaullah, who lives in Guwahati.

At the same time, Modi and Shah are pushing to amend citizenship law to grant citizenship to Bengali-origin Hindus who do not make it to the list.

The registry comes less than a month after the Modi government unilaterally stripped Indian-administered Kashmir, India’s only Muslim-majority state, of special constitutional protections that gave it political autonomy and exclusive land rights.

A team of United Nations experts, including the special rapporteur for freedom of religion or belief, said in July that the NRC could “exacerbate the xenophobic climate while fueling religious intolerance and discrimination in the country.”

Samujjal Bhattacharya, who has been part of a movement in Guwahati against undocumented immigrants for decades, said the idea that Muslims are being targeted is propaganda pushed by a pro-Bangladeshi conspiracy.

“They are propagating that human rights is violated here. We’d like to ask them, ‘who is violating human rights?’ In our own motherland, our rights are being violated by the illegal Bangladeshis.”

In 2010, the government selected Barpeta, one of Assam’s nine Muslim-majority districts, for a pilot NRC programme as part of a plan to verify voter rolls.

When protests erupted about the programme in the bucolic village of Khandakar Para, police gunfire killed four demonstrators, including 25-year-old Maidul Mullah. He is buried behind a mosque that dates to 1916, and his gravestone honours him for “sacrificing his life on streets of Barpeta for the cause of NRC”.

Another slain protester was Majam Ali, 55. His widow, Noor Begum, is illiterate, but a neighbour helped her submit documents dating back more than a half-century, including her grandfather’s listing on the original 1951 NRC and tax details, to no avail.

“My husband shed his blood for the NRC,” she said, “Everyone who should be on the list should be on it. Then only will (his) death be worth it.”

Manjuri Bhowmik, a 51-year-old Hindu, dreads what it will mean for her two sons if she is declared a foreigner.

Originally from the state of West Bengal, Bhowmik said she had lived in Assam since moving there to marry her husband in 1991. She recently received notice that she was a suspected “D-voter”, or “doubtful voter”, placing her status and that of her children at risk.

Despite submitting copies of ID cards, her degree from Calcutta University and a deposition from her brother, she sat outside a foreigner tribunal in Barpeta waiting for her chance to prove her citizenship.

“People are being harassed,” she said. “This causes great mental stress.”

What to know about tonsillectomy scabs