A new study adds to the evidence that vaginal douches may be harmful and suggests that black women may be most at risk.

According to the U.S. Department of Health & Human Services, in the States, around one in five females aged 15–44 resort to this cleansing practice, even though most doctors advise against vaginal douching.

Some research shows that vaginal douching could have adverse effects on genital health, particularly on the vaginal microbiome, which might make infections more likely to occur.

Some studies have even associated this practice with a higher risk of ovarian cancer and genital tract inflammation.

Now, a new study from the University of Michigan in Ann Arbor points to a new danger associated with douching. The research indicates that women who cleanse their vaginal canals have heightened concentrations of potentially harmful chemicals in their blood.

The research — whose findings appear in theJournal of Women’s Health— analyzed the data of 2,432 women aged 20–49 who took part in the National Health and Nutrition Examination Survey between 2001–2004.

The participants answered questions about which sanitary products — such as tampons, pads, vaginal douches, sprays, wet wipes, and powders — they used and how often they used them.

The researchers used regression analysis, which is a statistic model, to estimate the concentration of potentially harmful chemicals, including 1,4-dichlorobenzene and ethylbenzene, in the blood.

The team then looked for links between vaginal douching and a heightened presence of any of these chemicals in the blood.

The researchers found a “significant association” between this practice and a higher concentration of 1,4-dichlorobenzene — a volatile organic compound that could pose a threat to health — in the blood.

Those who used vaginal douches about once per month had 18% higher blood concentrations of this organic compound compared with participants who never douched. 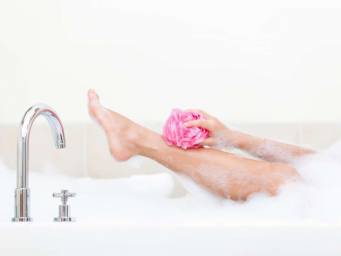 The team also noticed that black women reported practicing vaginal douching more than other survey participants. This suggests that they could be at more significant risk of exposure to such harmful chemicals.

“While [researchers] are more concerned about [vaginal douches] disrupting the balance of bacteria in the genital area or interrupt[ing] the pH level, they have not focused on the toxicity of those endocrine-disrupting chemicals, which is really important and need to be highlighted,” observes first author Ning Ding.

Ding also warns that the toxic potential of vaginal douches is particularly worrying considering that about 20–40% of the female population in the U.S. report using them.

Another study finding indicated that the use of feminine (intimate) powder over the past month was also significantly associated with heightened blood concentrations of another potentially harmful chemical: ethylbenzene.

Ding and colleagues are conducting a follow-up study to help establish whether different feminine hygiene products correlate with higher levels of volatile organic compounds in the urine when a person uses them during their menstrual cycle.

Although the researchers admit the need for further investigations, they do point out that so far, evidence suggests women may be better off avoiding vaginal douches altogether.

“I would recommend women not to douche.”

What to know about taurine