‘Paralysis can be avoided with timely treatment’

Khalifa Haftar, the Libyan commander whose forces are battling to capture the country’s capital from its internationally recognised government, has announced his willingness to open dialogue after repeatedly rejecting United Nations calls for talks.

The statement was issued late on Wednesday. hours after Prime Minister Fayez al-Sarraj called Haftar a “war criminal” and ruled out peace talks during a speech at the UN General Assembly in New York.

“When all is said and done, we need dialogue and we need to sit down” said Haftar.

However, dialogue was “not possible so long as terrorist groups and criminal militias control Tripoli,” he said in reference to the myriad of militias that back al-Sarraj’s Government of National Accord in the capital.

The move marks a reversal for Haftar, who earlier this month dismissed a UN call for renewed peace talks, saying a military solution was the best way of bringing the conflict to an end.

He also welcomed the special session to be co-chaired by France and Italy in New York later on Thursday, saying that he hoped it would come up with “proposals that serve Libya’s interests and at the same time restore security and stability”.

Libya has been mired in chaos and violence since an uprising toppled and killed longtime leader Muammar Gaddafi in 2011.

In April, Haftar’s self-styled Libyan National Army (LNA), which is allied to a rival admnistration in the country’s east, launched an offensive to “cleasnse” Tripoli of “terrorists”. The operation upended UN-led plans to broker a political settlement in Libya.

The fighting between pro-GNA and pro-Haftar forces has killed at least 1,093 people and wounded 5,752, while some 120,000 others have been displaced, according to the World Health Organization.

Haftar enjoys varying levels of support from Egypt, the United Arab Emirates, the United States, Russia, and France. Al-Sarraj is backed by Turkey and Qatar. 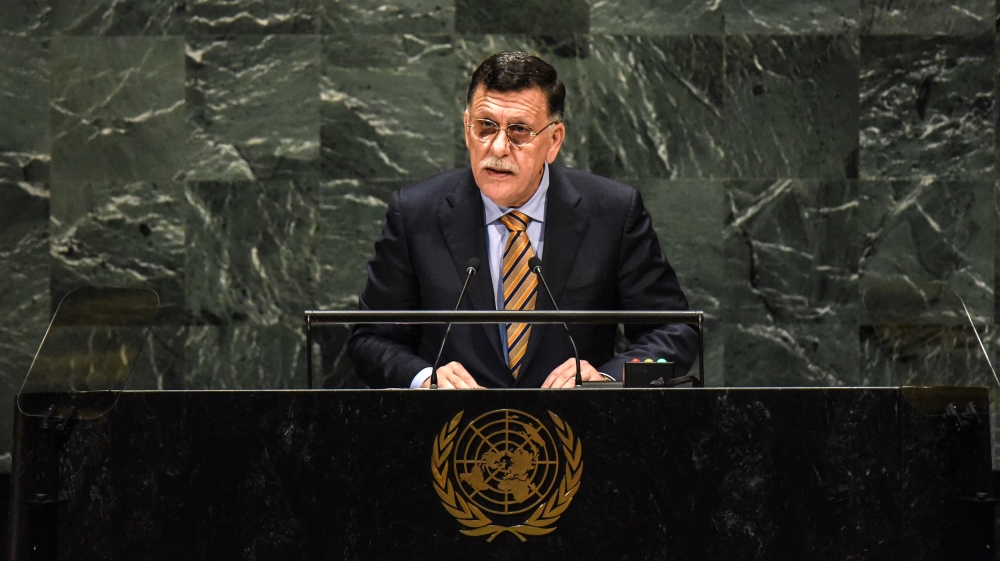 The prime minister, addressing the UNGA on Wednesday, used much of his speech to deride Haftar and his international backers.

He specifically singled out the UAE and Egypt,accusing the two countries of supporting Haftar’s “coup” attempts.

“What encouraged this war criminal to carry out this aggression is the support he received from certain states for years in flagrant violations of Security Council resolutions on the arms ban,” al-Sarraj said.

“It is unfortunate other countries continue to interfere in our affairs and support the aggression,” he added.

Al-Sarraj called on the International Criminal Court to intervene and “hold the responsible criminals accountable”.

Also on Wednesday, Ghassan Salame, the UN’s envoy for Libya, told the UN Human Rights Council that the conflict has now spread outside Tripoli, with air and drone strikes against the port city of Misrata, Sirte, and Jufra in central Libya.

“The conflict risks escalating to full-blown civil war,” Salame said by video link. “It is fanned by widespread violations of the U.N. arms embargo by all parties and external actors.”

“Serious violations of human rights and humanitarian law have been committed with total impunity, including increased summary executions, enforced disappearances, torture and ill-treatment as well as conflict-related sexual violence.”

The US also announced killing 11 suspected fighters with the Islamic State of Iraq and the Levant in an air raid near the southern town of Murzuq. The attack on Tuesday was the second by US forces in a week inside Libya.

The US, which has carried out occasional strikes in desert areas, has said it will not allow militants to use the fighting around Tripoli for cover.

Germany has meanwhile announced plans to host an international conference on Libya in conjunction with the UN later this year.