Lebanon’s influential Hezbollah leader Hassan Nasrallah said on Saturday that the Shia movement does not want the government to resign, as mass anti-government protests entered its third day.

Protests erupted on Thursday against proposed new taxes and have since spread to other parts of the country, posing a serious challenge to the coalition government headed by Prime Minister Saad Hariri amid a growing economic crisis.

Hariri has blamed his coalition partners for his government’s failure in addressing the dire economic situation facing the Middle East country.

Nasrallah, in a televised speech on Saturday, called for a new agenda and “new spirit”, adding that calls for government resignation were “a waste of time” since the same political groups will haggle over forming a new one.

Any tax imposed on the poor would push him to call supporters to go take to the streets, the Shia leader said.

Hezbollah group and its allies are part of the government that came to power last year after months of negotiations between political groups divided on sectarian and religious lines.

Al Jazeera’s Zeina Khodr, reporting from the capital Beirut, said people are angry after Nasrallah’s speech because Hezbollah did not throw its weight behind the protest movement.

“This is because in many ways it gives them a legitimate cover to avoid US sanctions for the group’s ties with Iran. So if Hariri gets out of the way and a Sunni prime minister is appointed, who is allied to Hezbollah, Lebanon could be sanctioned by the US,” she said.

“So political leaders are staying together, they are clinging to power but people here are clinging on to their demands.” 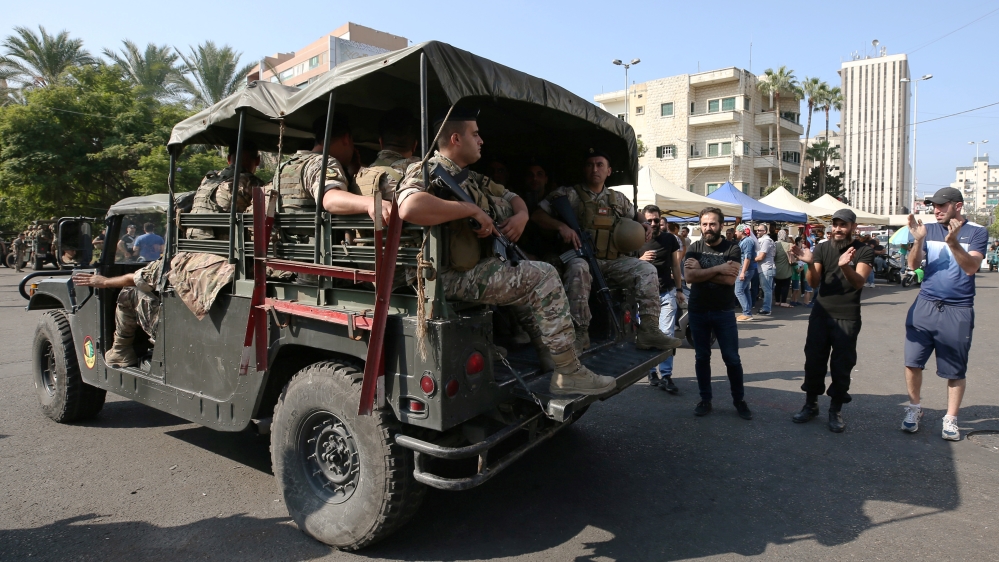 On Saturday, hundreds gathered for the third day of protests against tax increases and alleged official corruption after the security forces made dozens of arrests.

Crowds began gathering in front of the seat of government in Beirut around lunchtime, with many waving and billowing Lebanese flags.

Earlier, troops reopened blocked highways after security forces used tear gas and water cannon to disperse protesters who had gathered in the heart of Beirut on Friday evening.

“When you talk to people here and civil society movements they say they will not be deterred and that protests will continue,” she said.

“They say harsh government crackdowns will not stop them as the government did use heavy-handed tactics to disperse protesters.”

The Internal Security Forces said 70 people have been arrested so far. 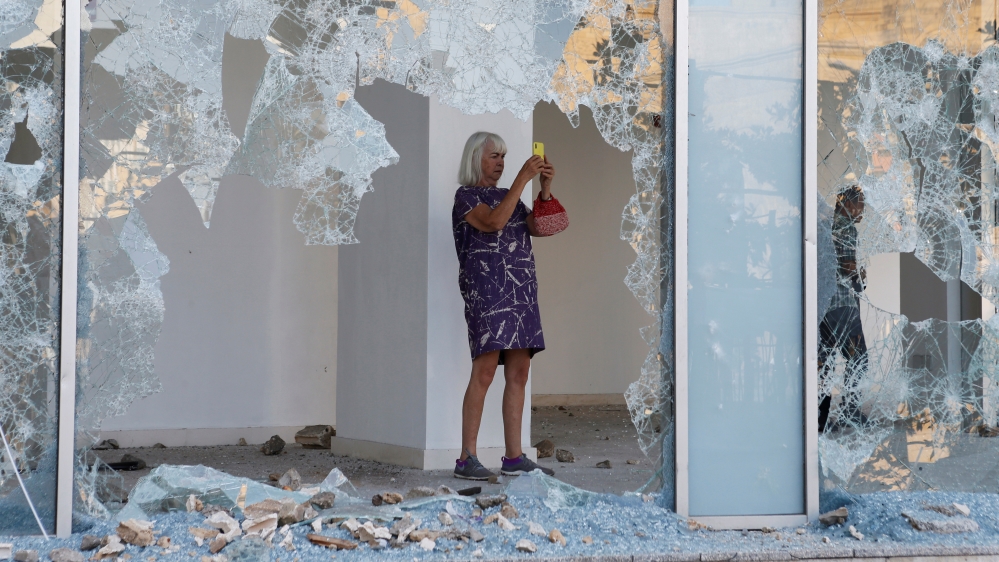 A woman takes pictures as seen through the shattered glass of a damaged shop, a day after protests targeting the government over an economic crisis [Mohamed Azakir/Reuters]

Groups of young people gathered on the streets of the capital on Saturday morning collecting tyres and other materials to make improvised roadblocks, the AFP news agency reported.

Parts of central Beirut looked like a war zone, littered with broken glass, overturned litter bins and the remains of burning tyres. Banks, many restaurants and shops remained closed.

A team of workers in grey jumpsuits was dispatched to clean up the debris near parliament, even as around a dozen protesters chanted “revolution, revolution”.

The demonstrations first erupted on Thursday, sparked by a proposed 20-cent tax on calls via messaging apps such as WhatsApp.

Such calls are the main method of communication for many Lebanese and, despite the government’s swift abandonment of the tax, the demonstrations quickly swelled into the largest in years.

Thousands of people of all ages, sects and political affiliations brought the capital to a standstill on Friday, before security forces dispersed them.

Protests also began on Saturday in some areas in southern Lebanon, a region which is mainly controlled by the Lebanese Shia Hezbollah movement and Amal movement.

Lebanese citizens have been suffering from dire economic conditions in the heavily indebted country and from tax increases, with anti-government protests erupting several times in recent months.

Lebanon is under pressure from the World Bank and the International Monetary Fund to implement austerity measures in return for financial support.

The country has one of the biggest public debt ratios in the world, equivalent to about 150 percent of gross domestic product (GDP).

Rainfalls to end Australia fight with bushfires in coming days