Beirut, Lebanon– As tear gas canisters fired by Lebanese soldiers whizzed closer and closer to them, a group of young men in downtown Beirut intensified their effort to crack open a parking meter and get to the coins inside.

Across the street, another group was doing the same.

“Break it, rip the whole thing apart,” came a cry from the crowd.

The young men lifted and tossed the rectangular box from side to side. Then, they rammed a street sign into the box again and again, until it finally cracked, spilling coins on to the ground. Greedy hands searched the tarmac for loose change.

“I have no income. This will help me with expenses and food and drink,” said a soot-covered young man who said he had pillaged 25,000 Lebanese lira ($16) from the meter box.

“I am barely living,” he said. “I take drugs and spend my nights out on the street messing with this or that person because there’s no work. I swear to God there’s no work.”

The young man was one among tens of thousands of people who took to the streets of Lebanon’s capital, Beirut, for a second day on Friday, in protest over plans by the Lebanese government to impose new taxes – including on WhatsApp voice calls – during a worsening economic crisis marked by a lack of jobs and high costs of living.

The protesters – representing a broad cross-section of Lebanese society – blocked roads across the country, chanting “Revolution!” and “We want the fall of the regime.”

The rallies – Lebanon’s biggest in years – prompted the government to scrap plans to tax WhatsApp calls, and Hariri, in an address to the nation on Friday, called on parties in his national unity government to come up with solutions within 72 hours.

But that did little to placate protesters.

“The economic reforms starts from the [bank] accounts of our politicians,” said 27-year old Mohammad, who works as a driver, as protesters rushed past him shouting profanities at the soldiers attempting to clear them from the Riad al-Solh Square.

Flattening himself against the wall behind him, Mohammad said he had accrued debts of $24,000, for simple living expenses and to pay rent.

“You tell me how I’m supposed to pay more taxes when I earn $800 and spend $400 dollars for an apartment and pay two electricity bills and two water bills,” he said. Many in Lebanon are forced to rely on private suppliers of water and electricity with the government unable to provide services around the clock since the country’s 1975-1990 civil war. 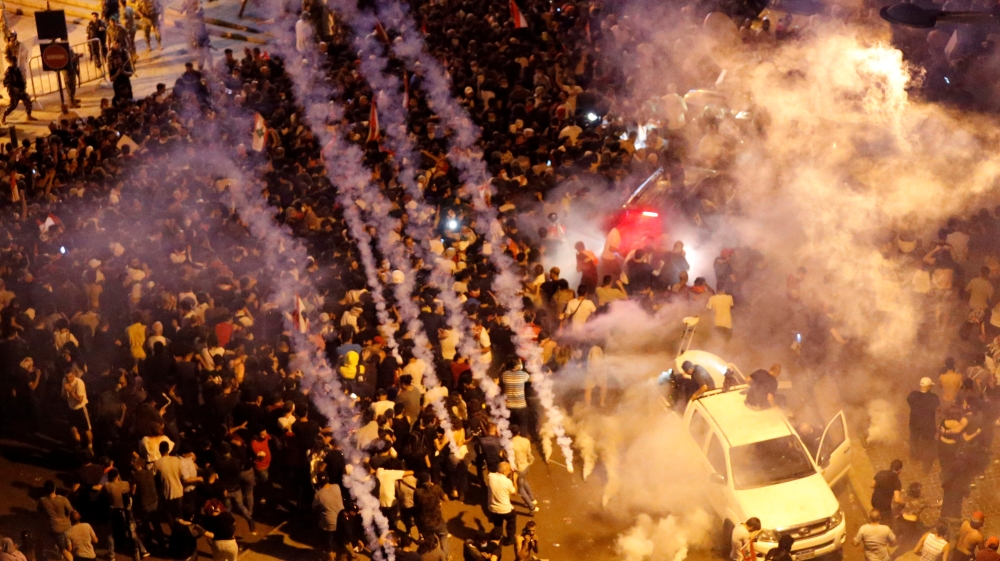 The poor state of public services is just a small part of the grievances that have led them to call for the downfall of the sectarian political class who have ruled the country since the war. Protesters also accuse politicians of enriching themselves as the economy stuttered – growth has stagnated since the outbreak of war in neighbouring Syria in 2011, unemployment has reached 37 percent, and remittances – a key source of income for the country – has started to dry up.

Ali Chalak, a professor of applied economics at the American University of Beirut, said taxes on the massive profits accumulated by those politicians and their close business associates in Lebanon’s banking and real estate sectors since the civil war was the way forward.

“Wealth needs to be taxed, not the incomes of average people,” he said.

He also said high interest rates on deposits in Lebanon’s banks have stunted investment in a real economy, meaning that those with large funds have continued to accumulate money while the average person has seen living standards drop as the economy stagnated.

‘You’ve made your money’

Nassib Ghobril, the chief economist at Byblos Bank, one of Lebanon’s largest, said that the government should focus on cutting wasteful costs and fighting corruption before imposing any new taxes – including on banks.

“The 2019 budget was almost entirely focused on tax increases, with very shy and unconvincing attempts at reducing costs,” he said, noting that there were some 90 state institutions that could be decommissioned and thousands of unproductive “ghost jobs” in the public sector.

Ghobril pointed out that officials had also failed to make the largely symbolic move of slashing their own salaries, an issue which had been debated in cabinet but never took place.

There was some hope a lifeline would come from the $11bn pledged by international donors at an international conference in France last year to shore up Lebanon’s economy, burdened by the third-highest debt to GDP ratio in the world. However, the money is tied to spending cuts, reforms to the country’s crippled electricity sector – which costs the state around two billion dollars a year – and combating rampant corruption.

The government has little to show in terms of progress a year later.

“These reforms are problematic because they are based on expenditures not exceeding revenues,” Chalak said. “This doesn’t work because, in a capitalist system, all growth is debt-driven, whether for a small business or a country; today’s debt is covered by tomorrows growth and profits. So, not only are you causing hardship currently, you’re also hurting future growth.”

If the current state of affairs continues, Chalak sees pressures on the state’s currency – pegged to the dollar for over two decades – increasing, and the state’s finances falling further into disarray, though he does not envision a devaluation of the currency in the near future, nor does he see a bailout by the IMF as necessary.

“[Central Bank Governor] Riad Salameh has somehow been able to keep the country afloat by its own bootstraps, because most of the debt is internal,” Chalak said.

“I think at some point policymakers will have to get some of that debt written off. Go sit with the big holders of capital and say, ‘You’ve made your money, now is the time to return the favour.'”

Arbaeen’ A peace walk from Najaf to Karbala