Jal el-Dib, Lebanon– Since the outset of the week-old protest movement in Lebanon, demonstrators’ calls have abounded for the country’s armed forces to side with them, arrest politicians accused of corruption – and even steward a transitional period.

Flags embossed with the Lebanese army’s seal and nationalist music praising soldiers for their service have been a regular feature at the daily protests calling for the country’s post-civil war leaders to be held accountable for years of corruption. Cheers of “God is with the army” often go up when soldiers pass near the demonstrations, which have brought together people from across Lebanon’s sectarian and political divide.

“I have confidence in the army. It’s the only institution where they don’t care if you’re Christian or Muslim, and I hope they lead the next stage,” Hagop, a 38-year-old army veteran, told Al Jazeera from a large protest on Wednesday on Lebanon’s main north-south highway in Jal el-Dib, north of the capital, Beirut.

“I’m the last person who would lay a hand on a soldier, and if they hit me, I would take a step back.”

But the army’s increasing involvement in a crackdown on the protest movement has complicated the situation.

Late on Friday, on the second night of the demonstrations, soldiers cleared a peaceful protest in central Beirut. Using batons and the butts of their rifles, they beat protesters even after the demonstrators were clearly incapacitated.

In a statement the following day, Human Rights Watch said the army had used “excessive and unnecessary force” against protesters. 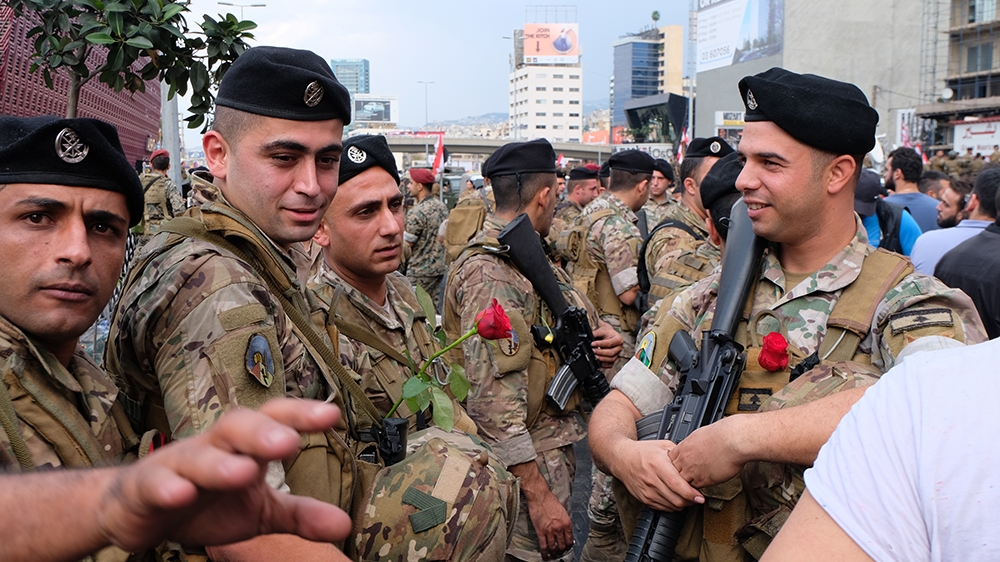 On Wednesday, the army said in a statement it stood by the protesters, but added they should not block roads or vandalise property. The language mirrored comments made on Monday by Prime Minister Saad Hariri who said that protesters rights’ would be respected but roads would be reopened.

These came as a response to the actions of the protesters who have intentionally been organising demonstrations in roads in a bid to bring the country to a standstill and increase pressure on the government.

On Wednesday, soldiers attempted to clear roads across the country from Jal el-Dib, Nahr al-Kalb and Zouk Mosbeh north of Beirut, and Sidon in the south, as well as in the capital itself.

Their efforts, however, were largely unsuccessful. Protesters amassed in these locations, forcing the army into long standoffs that continued into the night. Earlier in the day, there were brief clashes leading to a number of injuries.

‘We are with the people’

The army’s growing involvement in attempts to quell protests has caused some on the streets to have second thoughts about an army-led transition to a government that will not include politicians of Lebanon’s ruling old guard.

The protesters’ demands include the appointment of a technocratic government that would formulate a new electoral law under which early elections would be held. The current electoral law splits the country into 15 districts gerrymandered along sectarian lines and allocates seats by sect.

The government has given concessions to protesters, with Hariri on Monday announcing a commitment to no new taxes this year and $160m in new funds for housing loans. He also said the government would pass a law to return money stolen from the state in the last decades, adding that he was personally open to holding early elections.

The army’s role in the crackdown has also led to criticism of Army Commander Joseph Aoun, who was appointed by a similarly composed government in March 2017 and is a distant relative of President Michel Aoun.

“The solution definitely isn’t a takeover by the army, not even for transition. There is no such thing as temporary army transition in this part of the world,” Alfred Kahwaji, a 32-year old who works in sales, told Al Jazeera from Jal el-Dib. “The army commander was brought in by the parties, you can’t trust him.”

Rabih Zein, a prominent activist who has been organising smaller anti-austerity protests over the past year and continues to do so over the past week, agreed.

“Why is the army siding with those in power in Lebanon today? They should defy political orders and imprison the corrupt political class. But after what we saw there is no way they can rule,” the 24-year-old said.

Some soldiers who agreed to speak to Al Jazeera on condition of anonymity said their hands were tied.

“These are orders. Orders from the top. We can’t refuse them,” a young soldier said. Another standing next to him added: “We are with the Lebanese people, we are their right hand.”

In a low voice, another soldier with a yellow flower tucked into his flak jacket said: “You (protesters) are our voice. We can’t say anything, we’re not allowed to vote. God willing, this will turn out positively.”

Asked if it was possible they would defy orders, he responded: “There’s no way that will happen. Orders are orders.” 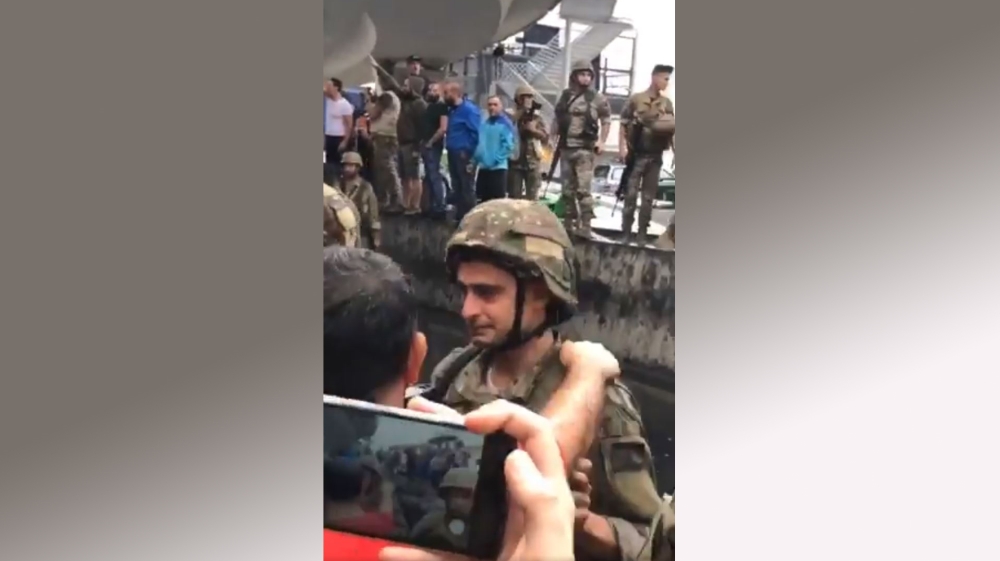 The conflicted feelings of some servicemen was perhaps best captured in Jail el-Dib on Wednesday when a soldier broke down in tears as protesters sang the Lebanese national anthem in front of him. Protesters hugged him, with one man wiping tears from his face.

“The army is being given orders to repress people, it’s not the soldiers themselves,” Hagop said. “But I’ve done my service and I know where these men stand. They are of us, and they are for us.”

The army has on several occasions intervened to protect protesters, including on Monday night in Beirut when they beat and arrested members of a convoy of Hezbollah and Amal Movement supporters who had headed towards demonstrations.

They also prevented protesters being run over by a convoy in Nabatieh in south Lebanon on Tuesday night.

Earlier this year, meanwhile, army veterans played an important role in anti-austerity protests when the 2019 budget was discussed. They blocked roads in opposition to measures that cut their end-of-service benefits.

“The soldier has defended this country his whole life, and now they are taking from them. So, even if they push us and we fight, we know it’s not personal, that we are all brothers. In the end, we kiss and hug each other,” Rudolf Naim, a 26-year-old who used to work in TV told Al Jazeera.

“The soldiers are being slapped by the same hand that’s beating us.”

Davos in the Desert: Kushner, Mnuchin & others to attend from US