Hong Kong leader Carrie Lam said on Tuesday her administration was in control of the situation in the territory after another weekend of violence, but that China could step in if the situation got worse.

At a news conference on Tuesday, Lam said the reality was that the sharp escalation in violence showed the protests were no longer “a peaceful movement for democracy.”

After invoking emergency powers on Friday to ban people from wearing masks at rallies, Lam said she couldn’t rule out other measures including calling for Chinese intervention.

“I still strongly feel that we should find the solutions ourselves,” she said. “But if the situation becomes so bad, then no options could be ruled out if we want Hong Kong to at least have another chance.”

Lam’s comments come after a long weekend of violent protests at which thousands of people defied the new ban on the wearing of face masks. On Sunday, the People’s Liberation Army raised a yellow warning flag at its garrison in Hong Kong as dozens of people protested outside the site.

The protests, which show no sign of abating, pose the biggest popular challenge to Chinese President Xi Jinping since he came to power in 2012. 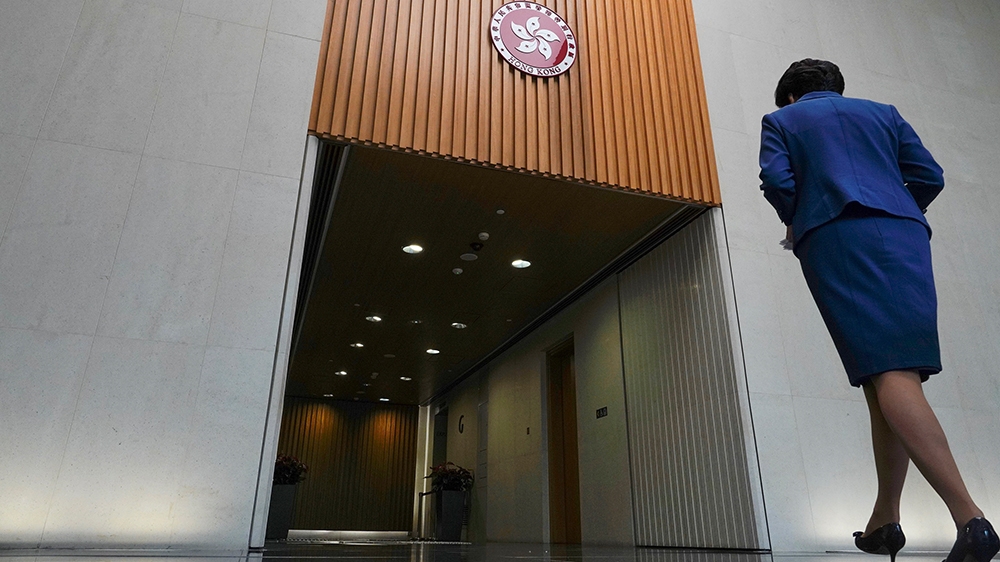 Two teenage protesters have been shot, one in the chest and the other in the leg, during skirmishes with police in escalating violence.

Hong Kong’s metro, which usually carries about five million passengers a day, said on Tuesday some stations would remain closed after being targeted in weekend violence. Services would also end at 8pm (12:00 GMT), more than four hours earlier than normal, it said.

The metro system was shut down in an unprecedented move on Friday night after protesters set stations on fire and attacked ticket machines. Only limited services were in operation over the weekend.

The Hong Kong government said in a statement early on Tuesday that “a large group of masked rioters repeatedly committed destructive acts extensively”, including “dropping a bicycle from height” that hit and injured a police officer. Roads were also blocked in various districts, it said.

ATMs, Chinese banks and scores of shops were vandalised while many restaurants and malls closed early.

Protesters daubed walls with graffiti condemning the police and streets were left littered with broken bricks and metal barricades from the clashes, during which police fired tear gas, rubber bullets and water cannon to subdue the protesters.

The protests, which started to oppose a now-withdrawn extradition bill and drew more than a million onto the streets, have grown into a pro-democracy movement against what is seen as Beijing’s increasing grip on the city since it reverted to Chinese control in 1997.

China has accused foreign governments, including Britain and the United States, of fanning anti-China sentiment.

Cameron Diaz reveals her plans to return to Hollywood

Biden to name his running mate next week

Coronavirus: UK extends lockdown for ‘at least’ another three weeks