Kulgam, Indian-administered Kashmir– Muhammad Ayoub Pala, 60, a frail man with a white flowing beard, is unsure whether his cancer-stricken son arrested in August is dead or alive.

Parvez Ahmad Pala, 33, from Matibug village in Indian-administered Kashmir’s Kulgam district, was picked up by the Indian security forces in a midnight raid on August 6.

The arrest came a day after India abrogated Article 370 of its constitution, which granted the Jammu and Kashmir state a degree of autonomy. Concurrent with the move, a crippling security lockdown was imposed on the Muslim-majority region, which entered its third month on Saturday.

“At night, the forces entered our house and took him away. I ran after him but they kicked me and put him in a vehicle,” his father recounted the night to Al Jazeera.

Parvez, who has two children aged eight and 10,is a cancer patient on life-saving drugs, his family said. He was diagnosed with papillary thyroid cancer in 2014 and has also undergone surgery, his medical records show.

The family said he also suffers from a skin disease and has paralysis in one of his hands.

Parvez’s medical certificate issued by the department of nuclear medicine at Sher-i-Kashmir Institute of Medical Sciences, a major tertiary care hospital in the main city of Srinagar, says he has been on a “high dose therapy” since July 2015.

“The patient is on regular follow up and for further management of disease and has to attend outpatient department on a regular basis,” says the certificate dated October 26, 2018, adding that he needs daily medication and regular investigation.

But for the last two months, the family has no idea of his health condition. 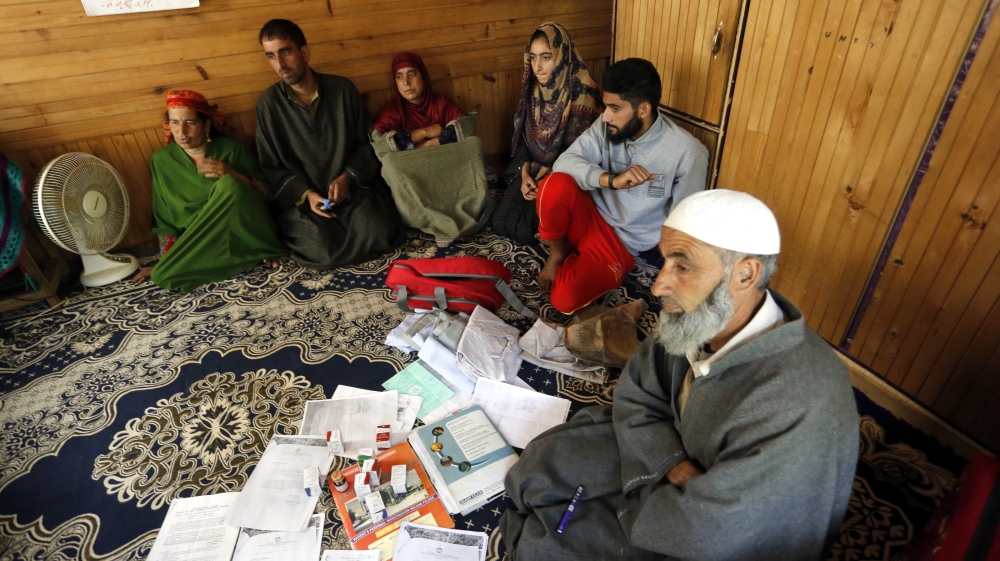 Parvez’s father displays the bag of clothes and medicines that he had taken to the jail, where authorities denied him a meeting with his son [Shuaib Bashir/Al Jazeera]

Parvez was booked under the stringent Public Safety Act (PSA), a law that allows detention for up to two years without bail.

After Article 370 was scrapped, India’s Hindu nationalist government arrested political leaders, separatists and hundreds of young people, including 144 children, some as young as nine years old.

Official figures say at least 350 of those arrested have been booked under the PSA, with most of them moved to jails outside the Kashmir region.

The detention of their relatives in jails outside Kashmir has made it difficult for families to meet them. It involves a journey travel, huge expenses and a tiring legal battle ahead.

‘Don’t know if he is dead or alive’

“I went to meet him on August 17 but the jail authorities there did not allow. I pleaded with them to just give him the medicines and clothes but to no avail. I came back heartbroken after trying for three days,” his father told Al Jazeera.

Ayoub said the travel to the northern state of Uttar Pradesh was not easy.

“I had never been to the place … I am an illiterate man and had to take another villager with me who is educated. I had to bear his expenses. We cannot afford to go there again,” he said, as family members around him break into tears.

“If he does not apply two ointments on his skin before sleeping, it is very painful for him and his skin starts peeling off. We are so worried about him, we cry all the time praying for him,” his mother Shareefa told Al Jazeera.

A police dossier prepared by Kulgam’s district magistrate termed Parvez as “a great threat to the security, sovereignty and integrity of state”.

“The subject at the behest of militants takes active part in instigating the youth. You, being an active over ground worker of banned Hizbul Mujahideen outfit, carry unlawful activities to instigate the youth to join militant ranks,” it said.

Parvez’s family has filed a petition in the Jammu and Kashmir high court, challenging his detention on medical grounds. But they fear the legal battle might be too long while his life remains at stake.

“We are trying everything, but when the court lists the case after a month, what surety do we have of his life. I approached all top offices but they send me from one place to another,” said Ayoub.

While Parvez’s family fears for his health in jail, Ateeqa battles loneliness at home.

Ateeqa’s 22-year-old son, Faisal Aslam Mir, was picked up by Indian forces in Srinagar’s commercial hub of Maisuma on August 5. She says he had gone to buy medicines when the armed forces bundled him into a vehicle.

“It was only when two of his friends visited me with the news that I came to know about his arrest,” she told Al Jazeera in the corridors of a courtroom in Srinagar, where she had come to know about the status of a petition she filed against the detention.

Mir has also been booked under the PSA and shifted out of Kashmir.

“I am a widow. I live alone in the house. My son was my only earning hand. I cannot even afford a travel to visit him. I can only pray for him now. These things force our children to take extreme steps,” she said.

On Thursday, journalists in the region held a silent protest against the communications blockade and demanded the restoration of mobile phones and internet services in their offices.

Normal life in the disputed region continues to remain crippled. Students are forced to stay away from their schools and colleges despite the government’s attempts to claim “normalcy” in the region where thousands of armed troopers guard its roads.

An official, on condition of anonymity, told Al Jazeera that “5,500 people were detained after the abrogation of Article 370, but 4,000 of them have been already released”. He added that 350 of them were booked under the PSA, most of who have been shifted to jails outside the region.

Last week, a Divisional Commissioner of the region, Baseer Ahmad Khan, announced the opening of schools, the second such call since August 19, but the students are staying away.

“It is difficult for our children to go to schools when the atmosphere is so unsafe. So many new military bunkers have been built; there is overwhelming presence of forces. We don’t want to send our children to schools in this tense atmosphere,” said Mehbooba Iqbal, a homemaker from Srinagar.

Thousands across Asia Pacific march in solidarity with Hong Kong