Srinagar : Indian authorities tightened restrictions before Friday prayers in Srinagar, the main city of Indian occupied Kashmir, after posters distributed at mosques called for a protest march towards a United Nations office.

The disputed region has been on edge after India’s Hindu-nationalist government on August 5 stripped the Muslim-majority state of its special status by abrogating Article 370, a constitutional provision that protected the demographic makeup of Jammu and Kashmir and provided it with limited autonomy.

In the lead-up to its controversial move, India sent thousands of additional troops to the region, arrested political leaders, imposed a curfew and shut down telecommunications and internet services.

On Friday, authorities re-imposed restrictions that have been eased in some areas, with paramilitary troops deployed to prevent any possible protests and roads sealed with coiled razor wires and steel barricades.

Access to the office of the UN Military Observers Group for India and Pakistan (UNMOGIP), based in Srinagar’s Sonwar locality and a focal point for many anti-India marches over the past three decades, was also blocked. 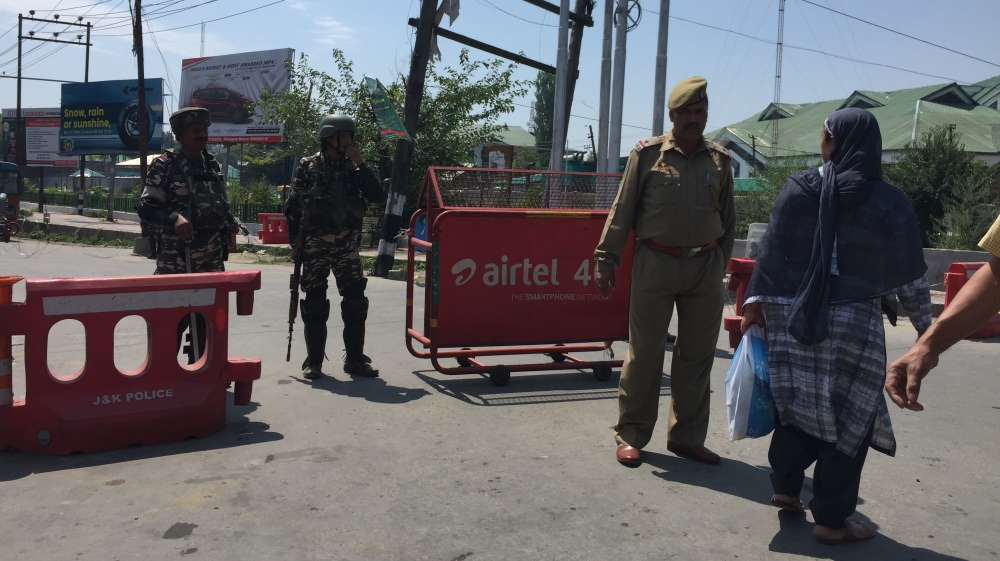 Still, hundreds of people took to streets of Soura, a densely populated enclave in Srinagar, to denounce the scrapping of Article 370.

“We will continue to take to roads ’til this suppression is not over,” said a female protester, as others shouted anti-India slogans and held banners that read “Wake up UN”.

“We have sacrificed our lives, our children and everything, they can’t silence all of us,” she added.

Kashmir is divided between India and Pakistan, which have fought two of their three wars over the disputed region. Rebel groups in the Indian-administered portion have battled the Indian security forces for decades, seeking independence from New Delhi or a merger with Pakistan.

The posters that were appeared in recent days at mosques calling on the residents to march towards the UN office bore the name of leading separatist front. However, it was not clear if the poster either was authored or authorised by the separatist group.

The tight restrictions not only thwarted the protest to the UNMOGIP office from taking place, but also prevented Srinagar residents from reach the city’s only children’s hospital, located in the same area,

“My child has been vomiting since the morning and I came here walking three kilometres, but … the forces turned me away. I told them my child is sick but they did not listen,” said Amina Jan, holding her three-year-old in her lap near Dalgate where security forces had put a barricade to stop the movement of people.

A female doctor working at the hospital told Al Jazeera that “despite showing her emergency service card, she was not allowed to go towards” it.

“We are playing on our lives and leaving homes in such an atmosphere to cater to patients, but we are not allowed. It seems these people do not have eyes,” she said. 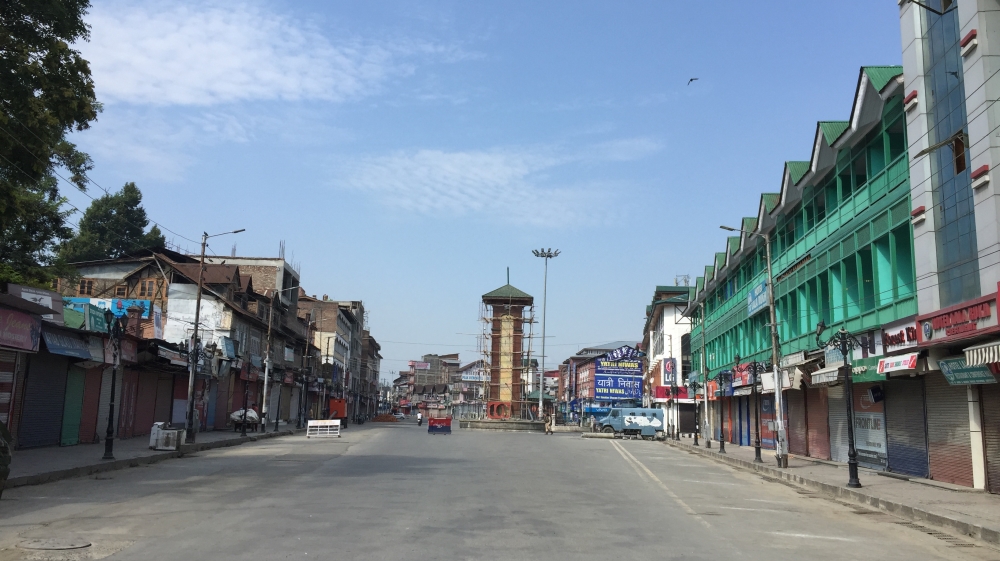 With communication lines still shut down, Srinagar residents have no option but to line up at the few telephone booths provided by the government to reach people outside.

But the communication blockade has also affected the lives of paramilitary and police personnel in Srinagar.

“I had called my family a day before the curfew was imposed and since then I have not been able to talk to them,” a paramilitary trooper from Madhya Pradesh state, who was manning a roadblock, said.“They must be worried.”

As the lockdown continues, markets across Kashmir Valley have remained shut since August 5. And despite the easing of restrictions in some commercial neighbourhoods, where authorities did not expect any protests, normal business has yet to resume.

In response to the restrictions and also seen as an act of protest, shopkeepers in many residential areas have adopted a new working calendar – they have begun opening their stores during the early morning and late evening hours.

A senior official told Al Jazeera that the “government will not allow the kind of atmosphere were the shopkeepers will decide the schedule to open shops in the evening.

“It has been directed to either let them open the whole day or they should not open in the evening. We will not allow a parallel government,” the official said, speaking on the condition of anonymity.

In Srinagar’s Jawahar Nagar locality, shopkeepers who had opened their stores on Thursday evening were ordered to shut them and open them during the daytime.

“The police entered the shops and told us either to open shops the whole day or don’t open them in the evening,” an owner told Al Jazeera.

Meanwhile, the growing turmoil has also affected weddings, an elaborate affair of ceremonies that last three days, with announcements of cancellation receptions being posted on local media.

Srinagar resident Abrar Ahmad, who is scheduled to get married on the weekend, said he had cut short his wedding to one day while the guest list had dropped from 300 guests to fewer than 100.

“We are not even sure if all the invited guests will come or not,” he said. 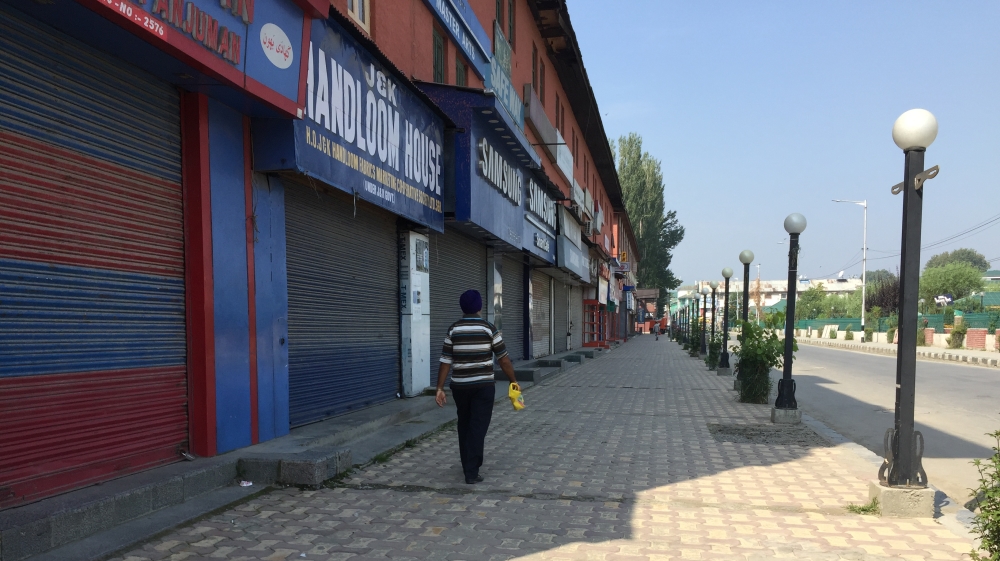 Last week, the authorities told government employees to resume duties and also ordered the reopening of schools for students up to 14 years of age.

But school attendance has been “thin to nil”, government officials have said, as parents refrained from sending their children to class.

“The government is forcing normalcy on us and telling us to do what they want. They want the vehicles plying on roads, they want the school buses to move … so that they can show normalcy. They want school children in uniforms to go walk on the streets – this is the worst kind of oppression on us,” shopkeeper Muneer Ahmad said.

“There is a complete suppression this time which I have never witnessed in my life. We can’t even talk about it because if they arrest us, we don’t know where we would be taken – there are no phones, no communication.”

In several neighbourhoods of Srinagar, a city of more than a million people, residents have alleged that police and paramilitary forces have carried out night raids and detained teenage boys.

“More than 10 youth have been detained in a night raid in our area,” said a resident of Mehjoor Nagar locality, where protests took place in recent days.

The officials who have given daily briefings to the press have thus far remained tight-lipped about the number of detentions amid reports that nearly 3,000 people have been held since the lockdown began.

Those arrested include former chief ministers and legislators, as well as separatist leaders and teenage protesters.

At a news briefing earlier this week, a reporter asked a police officer about a night raid in Srinagar’s Teilbal area where residents had alleged that police and paramilitary forces had used tear gas overnight.

The police officer, however, said the law enforcement agencies had dealt with the situation as “per the law”.

Fawad Chaudhry will be consider as PM’s Spokesman, Sources

Karachi and lower Sindh to be prepared for more rains