Toronto, Canada– Justin Trudeau was on course to win a second term as Canada’s prime minister on Monday evening, in an election that was seen as a referendum on the Liberal leader and his four-year-old government after a series of scandals.

After polls closed on Monday, Canadian broadcasters CTV and CBC declared a Liberal minority government, which means Trudeau will have to work with other parties in order to govern.

In 2015, he was the “change” candidate, backed by Canadians who were tired of nearly a decade of Conservative rule. But in the last year, Trudeau has been dogged by scandals that chipped away at his credibility, including revelations he once wore blackface.

Canada’s parliament has 338 seats, and the party that wins the majority of those seats – 170 or more – automatically forms the government and can easily pass legislation. If no party wins a majority, the parties must team up.

It is unclear which party the Liberals would join forces with to govern, with negotiations set to take place over the coming days. 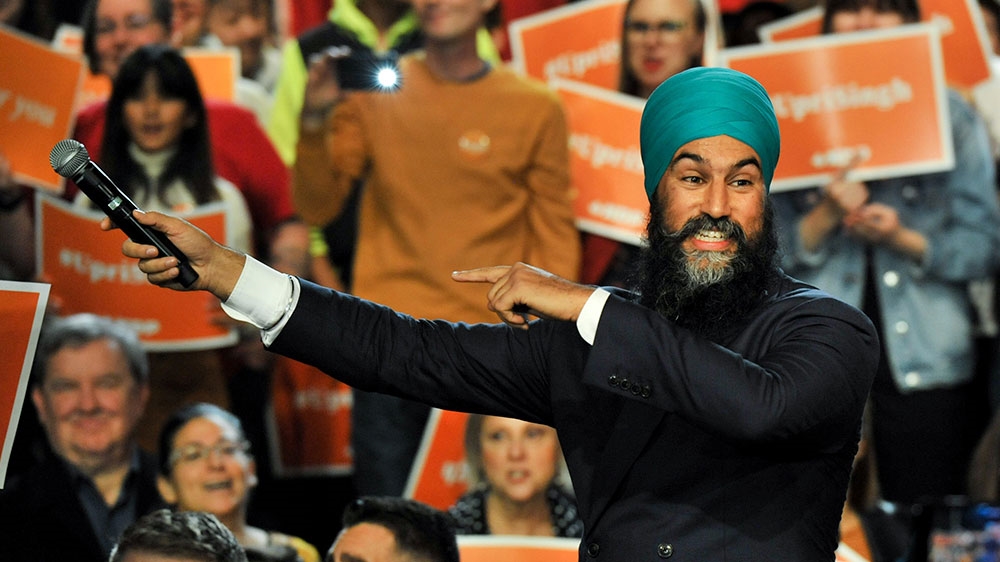 Projections showed that either the Bloc Quebecois or the New Democratic Party (NDP) could join with the Liberals to form a government. Parties could decide either to pass legislation on a case-by-case basis, or negotiate a longer-term arrangement.

The projected results showed the Conservatives, led by Andrew Scheer, forming Canada’s official opposition party. The Conservatives were on track for 121 seats compared with 99 in 2015.

During the campaign, Scheer said his government would “treat taxpayer dollars wisely”, cut income taxes, and balance the budget within five years. He also said he would cancel Trudeau’s carbon pricing plan, which he said was costing people too much money, even though there was a rebate.

Before the election, the NDP led by Jagmeet Singh was projected to see a “Singh surge,” but on election night, the count showed the party in the mid-20s from 44 seats in 2015. Singh is a popular figure among young, left-leaning voters.

As the NDP experienced an uptick in the polls in the final days of the race, Scheer encouraged Canadians to vote Conservative to avoid a Liberal-NDP coalition government, although neither party had made such an arrangement.

The Bloc Quebecois had a good night in Quebec – they won 32 seats compared with only 10 in the 2015 election. 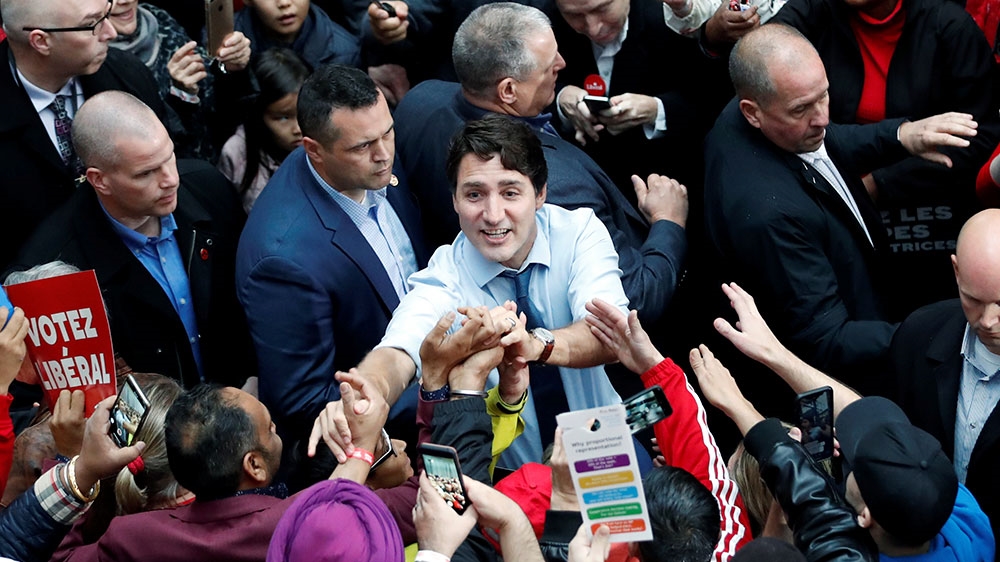 Trudeau looks set to return to power despite a series of scandals [File: Stephane Mahe/Reuters]

The dip in numbers for the Liberals could be attributed to a lack of excitement around Trudeau in 2019.

As the election campaign kicked off, photos emerged of the prime minister wearing blackface on multiple occasions, including once in 2001 at an “Arabian Nights”-themed party at the West Point Grey Academy where he was a teacher. And in early 2019, fearing job losses in an election year, he pressured his attorney general not to prosecute SNC-Lavalin, a company facing fraud and corruption allegations.

Trudeau promised an optimistic future for Canada – including taking climate change seriously, and working nation-to-nation with indigenous people – but many of his supporters felt he had failed to deliver on his lofty goals.

Combined with the scandals, this may have prompted some of his supporters to either switch their support to other parties, or stay home on election day.

This election, Canadians could cast their ballot in advance polls between October 11 and 14. The number of voters who did so jumped significantly compared with the last federal election – to 4.7 million in 2019, a 29 percent increase on 2015. There were more advance poll locations this time, and they were open longer.

Last week, Barack Obama tweeted his support of Trudeau, saying that as US president he had been “proud” to work with the Canadian leader, and he deserved another term.

In the end, it was not enough to save the Liberal leader’s majority.

Lebanon protests: All the latest updates

Iran defuses second cyberattack in less than a week