The meeting on Tuesday, which a source in the president’s office confirmed to Al Jazeera, came after Iraq’s parliament accepted the resignation of Prime Minister Adel Abdul Mahdi. Abdul Mahdi, who has taken on a caretaker role, had offered to step down after Iraq’s topic Shia scholar, Ayatollah Ali al-Sistani, urged a change in leadership.

The delegation handed an official letter, seen by Al Jazeera, to Salih saying that “in line with our leader Muqtada al-Sadr’s aim to end the sectarian muhasasa system, we relinquish our right as the largest bloc to nominate the next prime minister to the people.”

“The people are the largest bloc and should be the ones to nominate the next prime minister. Their choice is ours,” added the letter.

Introduced after the US invasion in 2003, the muhasasa political system apportions power among religious and ethnic groups, but many Iraqis believe that it has enabled rampant corruption among political elites and thousands have taken to the streets to call for an overhaul of the system.

The protests have gripped Baghdad and the country’s mainly Shia south since early October. At least 430 people have been killed and thousands of others wounded in a violent crackdown by security forces against the demonstrations.

According to article 76 of the Iraqi constitution, the largest parliamentary bloc has the right to nominate a new prime minister within two weeks. The candidate will then be tasked by the president to form a new government within 30 days.

Officials and experts have warned of potential political crisis similar to the one that arose after the May elections. Parliament’s two main blocs, Sairoon and Fatah – which includes leaders associated with the paramilitary Popular Mobilisation Units headed by Hadi al-Amiri – resolved the political crisis by agreeing to form an alliance that nominated Abdul Mahdi as prime minister.

As part of the ongoing negotiations to nominate a new prime minister, a delegation of 22 MPs representing 130 parliamentarians from across various Sunni, Shia and Kurdish parliamentary blocs and alliances also met Salih at the presidential palace in Baghdad, a parliamentary source told Al Jazeera.

Considering themselves “the largest bloc” the delegation handed over a letter – seen by Al Jazeera – and signed by all 130 parliamentarians saying that they should be the ones to nominate the next prime minister in coordination with the protesters’ demands and choice.

The meetings came after a parliamentary session that was due to convene to discuss a new electoral law, one of the protesters’ key demands, was postponed indefinitely.

The proposed law increases the share of independent candidates but retains considerable power in the hands of political parties, including the right to appoint the prime minister.

It was unlikely that demonstrators, who want a new electoral law that allows them to vote in their own leader, will accept the proposal.

The United Nations Iraq envoy on Tuesday warned that the country was “at a crossroads” and that leaders must rise to the moment to build a stable, inclusive and prosperous country.

Jeanine Hennis-Plasschaert told the UN Security Council that demonstrators have taken to the streets to demand the country reach its “full potential for the benefit of all Iraqis”.

Meanwhile, in Iraq’s southern city of Najaf, a parliamentary committee met with the security forces at police headquarters in the holy city after protesters surrounded a key shrine amid concerns of a new outbreak of violence. 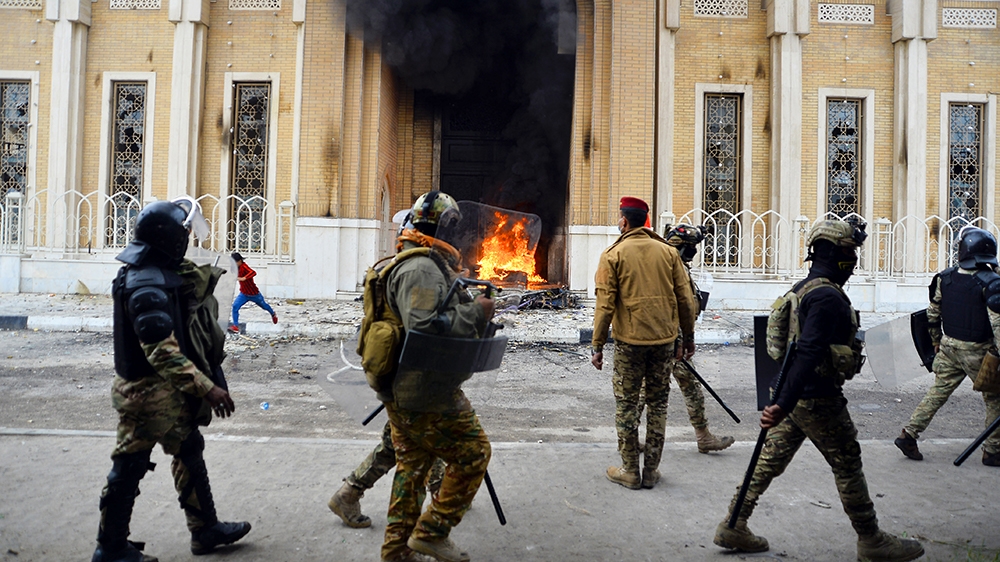 “We agreed with Muqtada al-Sadr’s representatives to help calm down the situation,” Shaykh Saeb Abu Ghoneim, one of the tribal leaders in Najaf, told Al Jazeera.

“We are working on encouraging protesters to remain in the main demonstration sites away from the shrine so as to avoid further escalations,” he added.

Sources in Najaf told Al Jazeera that Sadr’s Peace Brigades deployed in large numbers across the city to serve as a buffer between security forces and demonstrators.

The Hakim shrine has been the focus of recent clashes in Najaf which has been rocked by violence since protesters torched the Iranian consulate on Wednesday, following a similar incident last week.

US coronavirus death toll surpasses that of WWI