Baghdad, Iraq –Dark and narrow, the stairway that leads to the top floor of Baghdad’s “Turkish Restaurant” building is teeming with people. Once home to a popular rooftop restaurant, the ramshackle structure in the centre of the Iraqi capital has become a landmark of the ongoing mass protests against the country’s political establishment.

The high-rise was evacuated in 2003 when it was bombed by invading US forces, leaving in its wake an empty concrete carcass. For over a decade, the tower remained uninhabited, until a group of demonstrators claimed it as their own on October 25 and made it into the centre of the protests against corruption, unemployment and poor governance and public services.

The building, which demonstrators said was used by snipers to shoot at protesting crowds during the first wave of rallies, has since been draped in the Iraqi tricolour and plastered with banners demanding the fall of Prime Minister Adel Abdel Mehdi’s government.

For over a month now, Iraqis in Baghdad and several southern cities have been calling for an end to a political system established after the US invasion that critics say has allowed the ruling elite to enrich themselves while much of the oil-rich country’s population suffers economic hardship. More than 260 people have been killed and thousands more wounded by security forces since the start of the protests, which have recently seen protesters blocking roads, including a highway leading to the country’s main port in the south.

“We’ve lost hope in the country,” Ali, a 25-year-old demonstrator at the building, says. “I can’t start my life until this protest is over.” 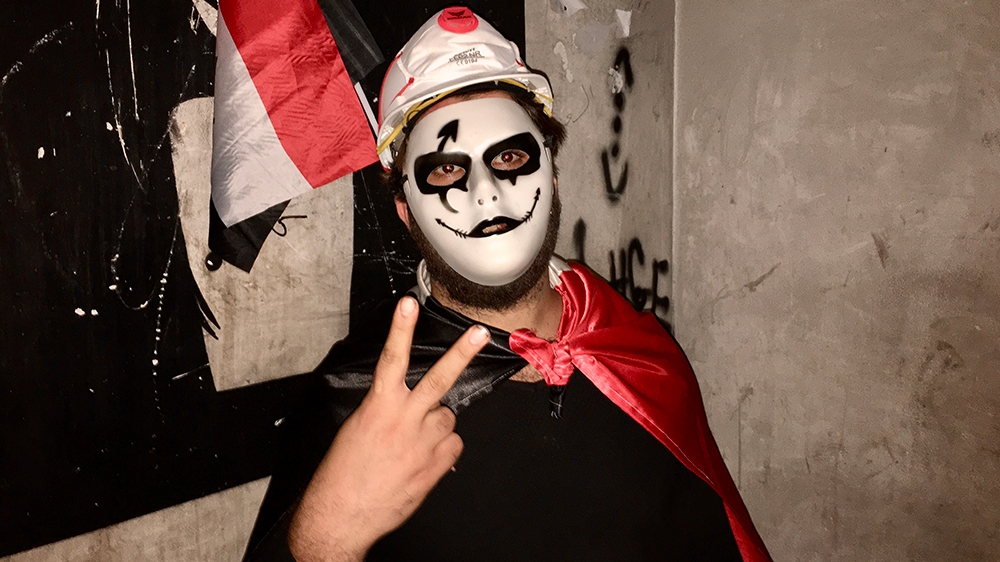 Situated between the Tigris River and Tahrir Square, the protesters’ building is far enough to avoid direct fire and tall enough to allow for a bird’s eye view of security forces and the bridges that lead to the heavily-fortified Green Zone, where ministries and embassies are located.

On the ground floor, a large open space is packed with curious visitors, improvised bands of tambourine players, tuk-tuks and elderly protesters taking rest in the shade. Above them, 14 floors buzz with chanting men, women and children shrouded in Iraqi flags. Some older protesters launch into angry soliloquies against the role of the United States and Iran in Iraq, while others rest in quiet solitude, looking out onto the Tigris.

But behind the commotion lies a structured hierarchy and a careful distribution of jobs.

According to volunteers, each floor is overseen by one manager and nine helpers, tasked with making sure all residents receive their daily supply of food, water and other basic necessities as they continue to protest.

Every floor-leader is armed with a walkie-talkie and a badge, distinguishing them from the myriad of other people arriving daily in a show of support for the protests.

“I’ve not slept in two days,” 27-year-old Hassan, who runs the seventh floor, says, his bloodshot eyes giving away the long hours of work and rudimentary conditions inside the tower.

“Our main reason for protesting is a change of government,” adds Hassan, who like many other young Iraqis has been unemployed for years. 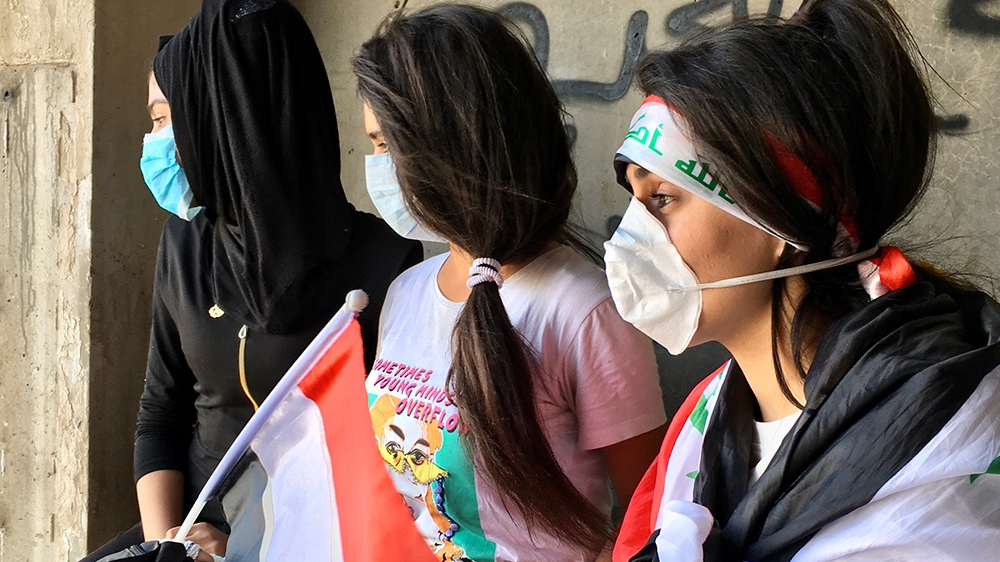 As a colleague buzzes him about the arrival of tangerines from below, he swiftly pulls up the plastic box of fruits with a rope tied to a blanket, before storing them in a safe corner.

Hassan says there have not been any major security issues so far inside the building, bar the one time when they had to immediately escort out a group of drunk men.

Visitors are not allowed in if they are inebriated or if they are carrying weapons, explains 24-year-old Abdullah, one of the volunteers in charge of the ninth floor.

In a bid to create a semblance of security, residents have organised checkpoints at the feet of both staircases, where they vet visitors before allowing them through a makeshift metal barrier. Men in white helmets usher the crowds up and down the old stairs with green laser beams, pointing out the gaps where the handrail should be. Other volunteers wave incense sticks and spray air freshener in an attempt to mask the pungent smell of urine.

Abdullah, an unemployed civil engineer, relocated to the building 10 days ago and runs a strict schedule for some of the 50 men on his floor.

“Every morning at 6am we get up, fold our blankets, tidy our areas and get to work,” he says, pointing to the closed-off sleeping space he and 12 other residents sleep in – a makeshift room enclosed by thick acrylic blankets.

Abdullah says he mostly uses a nearby mosque to wash, though running water, bathrooms and showers have all been made available inside the building. 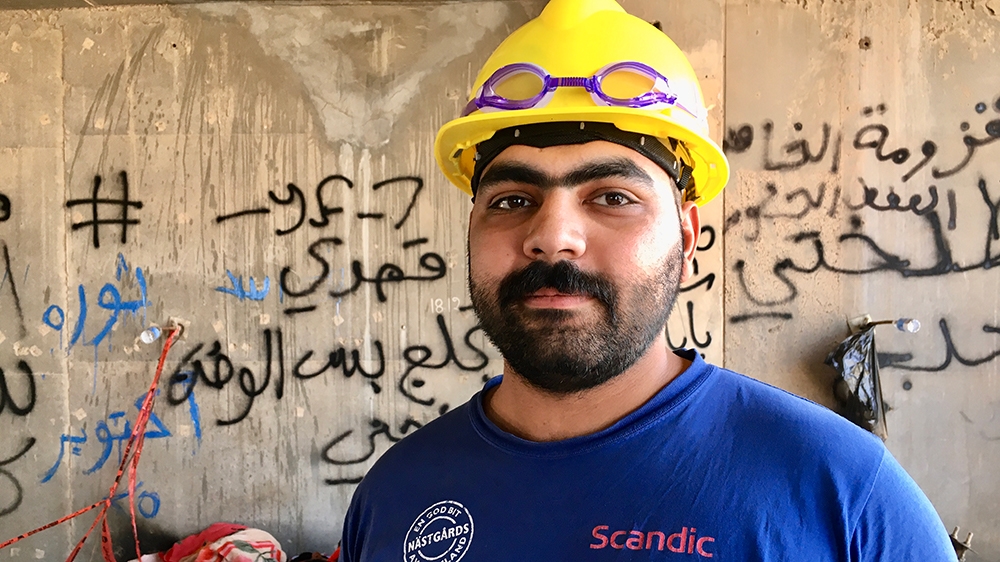 As night falls, the tower, which has been without power years, lights up with electricity donated by a nearby building and generators on the ground floor.

While some take advantage of the night to catch up on sleep, others continue to protest by shining laser beams onto the security forces below.

“It’s not like we can do anything else to them,” Abdullah says, looking down on Jumhuriya bridge where protesters have set up a scrap metal fortress, some 80 metres (262 feet) from the blast walls erected by security forces.

Not all protesters inside the “Turkish Restaurant” are permanent residents like Abdullah and Hassan. On the third floor, young medical students work shifts, while volunteers sporting blue T-shirts come to sweep floors and pick up rubbish before heading out again.

While permanent residents are mostly young men in their early 20s, visitors to the tower are both young and old, male and female, and hail from all walks of life. 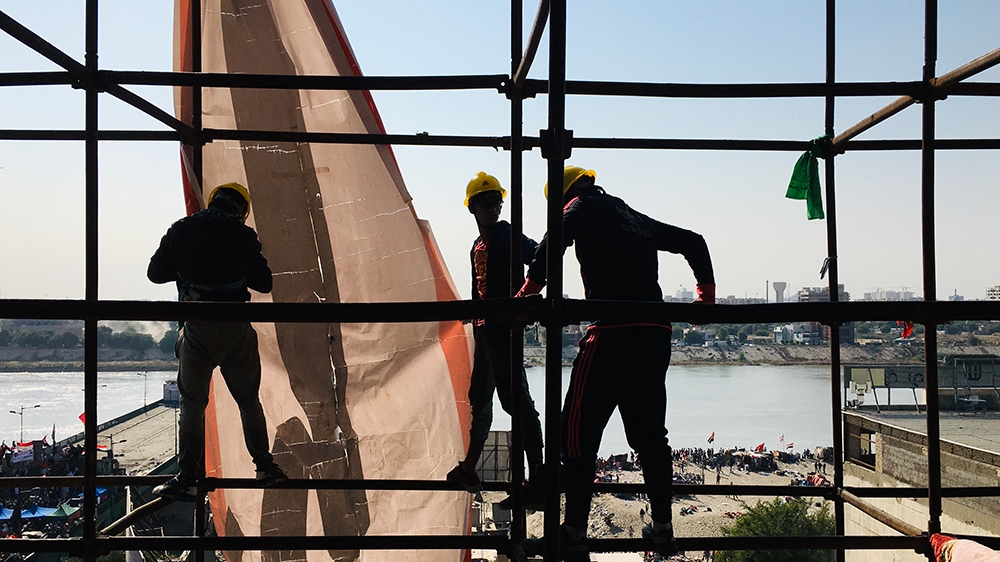 As protests intensified, Iraqi President Barham Salih last week said Abdul Mahdi is willing to step down once political leaders agree on a replacement for the prime minister’s post. He also said he would approve an early parliamentary poll once a new electoral is approved, but this could take weeks.

Abdul Mahdi this week called protesters to halt the sit-ins and for factories, schools and universities to reopen, saying “it’s time for life to return to normal”. The embattled prime minister also said the threat to oil facilities and the closure of roads had cost Iraq “billions” of dollars and contributed to price increases.

But demonstrators are adamant they will not stop protesting until their demands are met.

Hassan, on the seventh floor, says he has no intention of leaving the high rise until Iraq’s political elite makes changes to the system.

Turkey’s Erdogan to visit Moscow after convoy targeted in Syria