Widodo, popularly known as Jokowi, introduced the 34 men and women who made up his second term cabinet the on the steps of the presidential palace in Jakarta.

The 58-year-old president secured a second term in April elections, following a bitter campaign plagued by fake news online and claims from Subianto that the government staged a “massive, systematic and fraudulent” election.

At least nine people were killed in unrest that followed the poll and there was more violence last month when students took to the streets in their thousands to oppose new bills that critics say undermine the fight against corruption and threaten basic rights.

Announcing Subianto’s new role, Jokowi said: “I believe I don’t have to tell him about his job – he knows more than I do.”

After he was sworn in Subianto said he would immediately head to his ministry.

“I will learn the latest situation and then we will begin work,” he told reporters.

Jokowi when introducing Prabowo as defmin: “I don’t need to tell you his role. He knows more than me.”

Yup, auto-pilot civil-military relations will only get worse in the next five years. pic.twitter.com/lYaUaPBV5p

Since the election, the two have appeared together in a series of apparently friendly public meetings, including on Monday when Subianto, 68, hinted that he and another member of his Gerindra party had been tapped for top government posts.

Jokowi has often described his rival as a “good friend” in social media posts. 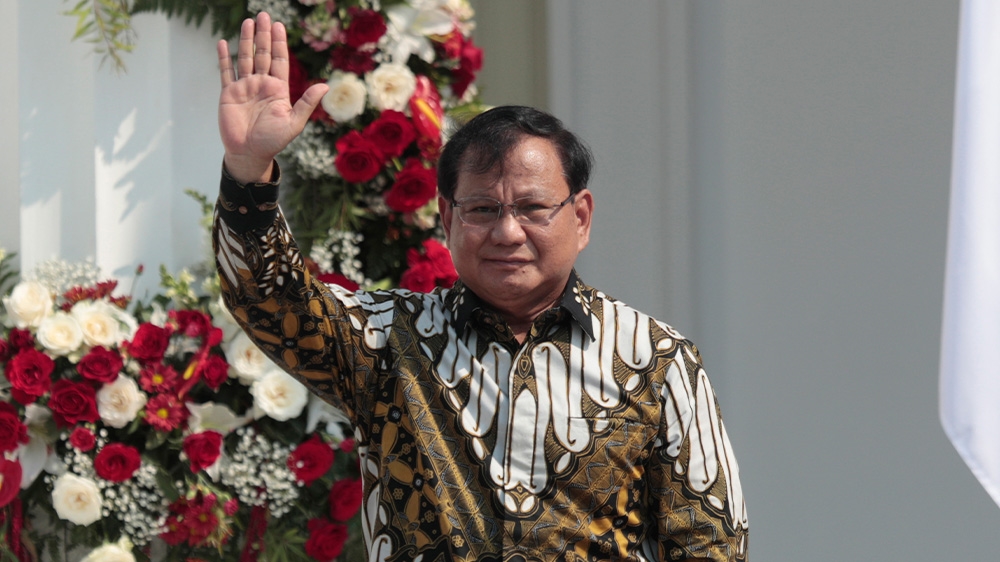 Bringing in Subianto, who has twice failed to win the presidency, could make it easier for Jokowi’s government to push through legislation – the inclusion of his Gerindra party lifts government support in parliament increases to 74 percent.

But the former son-in-law of Indonesia’s late dictator Suharto has been accused of abuses, including the kidnapping and disappearance of several pro-democracy activists, in the lead up to massive street demonstrations that brought down the regime in 1998. He has never been charged in relation to the allegations.

“I’m not really surprised given Joko Widodo’s record in his first term when he appointed General Wiranto,” Usman Hamid, Executive Director of Amnesty Indonesia told Al Jazeera, referring to the former Security Minister who had been accused of serious human rights violations in what is now Timor Leste.

“Prabowo’s appointment is a worrying signal that our leaders are forgetting the darkest days and human rights abuses committed in Suharto’s time.”

Wiranto, a 72-year-old former army chief, is recovering in hospital after he was stabbed by Islamic State of Iraq and the Levant (ISIL, or ISIS) group-linked fighters this month.

Among the ministers, who posed together wearing traditional batik, were a number of professionals and technocrats including Nadiem Makarim, the 35-year-old co-founder and chief executive of Indonesia ride-hailing and payments firm Gojek who was made education and culture minister.

Yose Rizal Damuri at Jakarta’s Center for Strategic and International Studies said the presence of political party representatives in the cabinet remained significant, and could hinder progress on reform.

“Party representatives may have mandates from their own parties,” he said, noting that in Widodo’s first term cabinet “everyone had their own agenda”.

US diplomat: Trump tied Ukraine aid to demands for probes

Pelosi: US House will start formal impeachment inquiry of Trump