Indonesia is battling forest fires causing toxic haze across southeast Asia with aircraft, artificial rain and even prayer, President Joko Widodo said during a visit to one of the worst-affected areas on Tuesday.

Forest fires are raging on the islands of Borneo and Sumatra, sending a choking smog across the region — including towards neighbours Malaysia and Singapore.

During a visit to Riau province in central Sumatra on Tuesday, Widodo said nearly 6,000 troops had been sent to hot spots to help put out fires.

“We have made every effort,” he said.

As well as firefighters on the ground, dozens of aircraft were being used for cloud seeding to stimulate rain,  and to dump water on the flames, he said.

“We have also prayed,” he added, after a visit to Amrulloh Mosque in Pekanbaru.

The toxic smoke caused by deliberate burning to clear land for plantations is an annual problem for Indonesia and its neighbours, but has been worsened this year by particularly dry weather.

Authorities on Monday said they had had arrested nearly 200 people suspected of being involved in activities that led to the out-of-control fires. 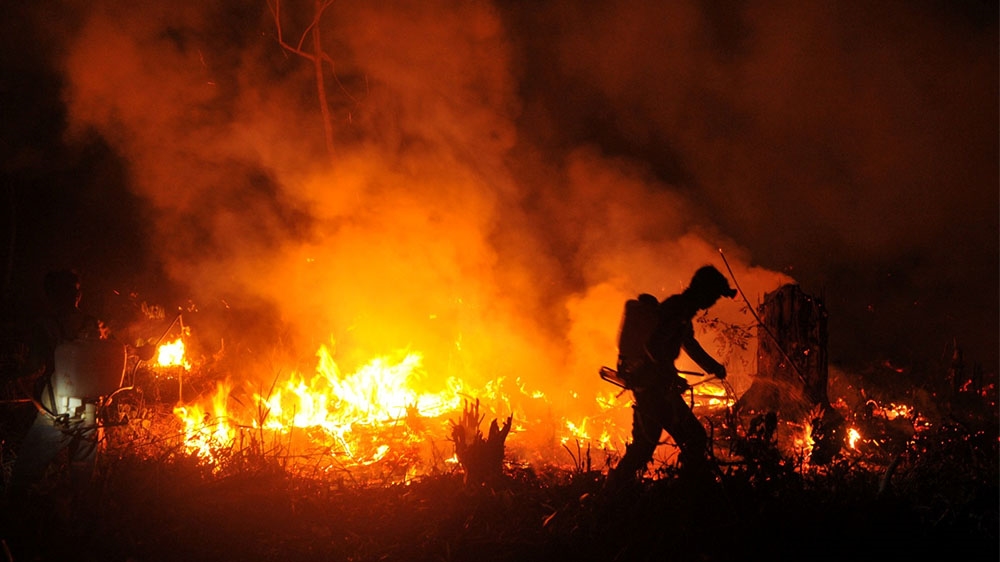 An officer tries to extinguish raging fires on land near Palembang in southern Sumatra in Indonesia last month. [Wahdi Septiawan/Anatara Foto via Reuters]

The Association of Southeast Asian Nations (ASEAN) meteorological agency said on Tuesday the number of hotspots had stabilised, but a thick haze continued to envelope the region.

On Borneo island, which Indonesia shares with Malaysia and Brunei, pollution levels were “hazardous”, according to environment ministry data. Hundreds of schools across Indonesia were shut. Schools were closed too in parts of Sarawak, where readings in Sri Aman close to the Indonesian border rose close to 400 on Tuesday night, according to official figures.

In peninsular Malaysia, the met office and air force were working together to seed clouds with chemicals in the hope that rainfall would clear the haze.

But hundreds of schools were closed Tuesday, affecting more than 350,000 students.

Air quality was at “unhealthy” or “very unhealthy’ levels in many parts of peninsular Malaysia and Sarawak state on Borneo, officials said.

In Singapore, the National Environment Agency forecast air quality for the 24 hours from Tuesday evening to range between the ‘high end of the moderate range and low end of the unhealthy range”. It added that the situation could worsen depending on wind conditions.

What ways are there to measure body fat?

In a first, pet cat in UK tests positive for coronavirus

Peace in Pakistan owes much to Gen Bajwa

India rape victim dies in hospital after being set ablaze

US bars ex-Saudi diplomat from entering US over Khashoggi murder