The moment India had waited years for – when the “15 minutes of terror” transformed into fist-pumping exhilaration – arrived as a time of silence and bitter disappointment.

India’s hopes for its Vikram lunar lander to make a soft landing on the moon were all but dashed when ground control lost the craft’s signal.

“This is mission control centre. The Vikram lander descent was as planned,” said a visibly shaken Kailasavadivoo Sivan, the chairman of the Indian Space Research Organisation (ISRO) into a control room’s microphone.

“And the normal performance was observed up to an altitude of 2.1 kilometres. Subsequently [the] communications from the lander to ground station was lost. The data is being analysed.”

What little is known is that the landing craft had successfully performed the rough braking phase, a controlled but strong fuel burn to reduce its descent velocity. But the trouble began shortly after the fine braking phase was initiated.

That latter phase should have reduced the speed a little bit more to create the conditions for the craft to make a soft landing. While applause from engineers, scientists and invited guests matched each prior phase of the descent, the mission control room suddenly went quiet.

Those seated at workstations inside the Mission Operations Complex in Bengaluru could be seen to be holding their heads in disbelief. Their distress came watching a bright green line – representing the lander’s trajectory on a large screen – suddenly veer off-course.

Soon after, it was clear that communication with the Vikram lander was terminated. While it is not yet evident whether the lander was able to make the necessary course corrections and land in one piece, the outlook is grim.

Following Sivan’s announcement that communications with the lander had been lost, Indian Prime Minister Narendra Modi entered the control room to join the engineers and scientists.

“What you have achieved is no small feat,” Modi said. “I am with you. Proceed with courage… Hope for the best.”

India had hoped the Chandrayaan-2 mission and its Vikram lander would put the nation into an exclusive spacefaring club with those few who have successfully completed a soft lunar landing.

The only nations to have attained that achievement are the former Soviet Union, the United States and China.

After the hoped-for landing, Modi had been scheduled to give a national address praising India’s space programme. Instead he punched out a tweet.

“India is proud of our scientists! They’ve given their best and have always made India proud. These are moments to be courageous, and courageous we will be!”

“Chairman @isro gave updates on Chandrayaan-2. We remain hopeful and will continue working hard on our space programme,” Modi tweeted.

But Modi was still scheduled to speak to the nation on Saturday morning from the control room.

This achievement on the moon would have been even more astonishing because after a series of very expensive setbacks – including an aborted initial launch – ISRO had delivered the Chandrayaan-2 lunar mission at a budget price point of just $141m.

To put that into perspective, SpaceX’s launch service charges $150m to take a ride up to low earth orbit on its three-rocket Falcon Heavy. The Chandrayaan-2 pricetag includes the cost of the rocket, orbiter, lander, rover and all of the scientific payloads. 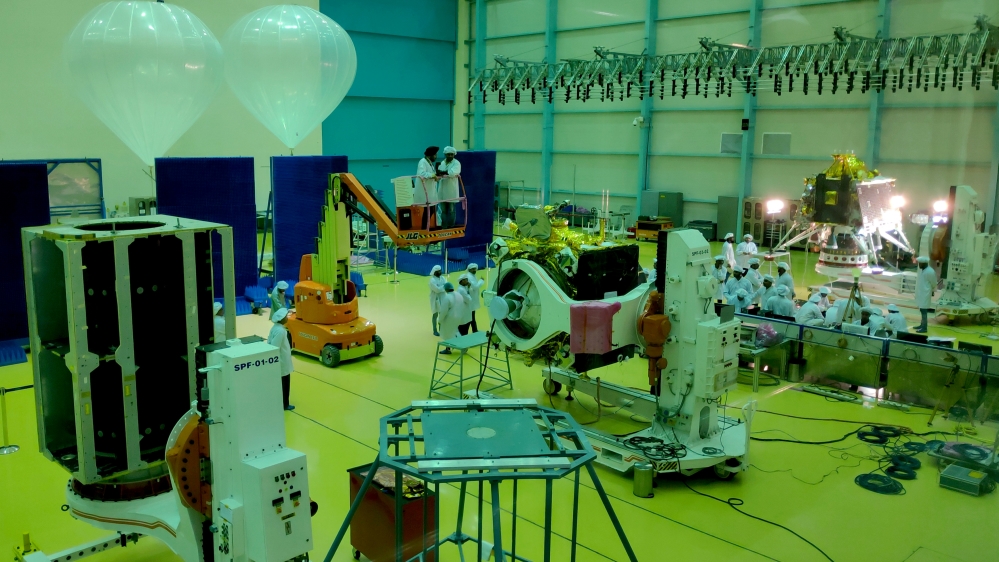 A major factor that kept costs low was the slow velocity of the journey. Once it was launched on July 22, Chandrayaan-2 took a month and a half – with 15 short but critical course manoeuvres, or fuel burns, to achieve lunar orbital insertion and travel 384,400km from its launch pad.

The now-famous “15 minutes of terror” began at 20:08 GMT, when ISRO instructed the lander’s onboard computer to take over control of the craft and initiate the landing sequence. Sivan had earlier warned that once the descent had begun, mission control would have to sit, watch and hope.

Once the lander had landed, ISRO planned for the onboard Pragyan rover to be released to study the elements that make up the lunar surface, explicitly but not exclusively examining the building blocks for water.

If the lander is proved to be forever lost, the Chandrayaan-2 mission continues with the orbiter craft, which was outfitted with a variety of technologies to collect data on the moon’s surface composition and atmosphere, as well as map the terrain, to include where ice made of water is located. The orbiter should remain in service for roughly a year.