Jambi, Indonesia –Agus Setio Pembudi has been working as a volunteer firefighter for almost two months, trying to quell vicious forest fires that have ravaged parts of Indonesia including the islands of Sumatra and Kalimantan since July.

Last week, he almost paid for it with his life.

“I’d been out in the fields since the morning and the water pump I was using ran out of petrol (to power it),” Pembudi, a local farmer told Al Jazeera. “Without any water, I couldn’t keep the smoke away and I couldn’t get enough oxygen. I started shouting to my team. I don’t remember anything after that.”

Pembudi collapsed in the middle of the burning forest and was only saved because other volunteers heard his cries for help.

“I heard him screaming, but I couldn’t see him through the haze,” said Pastor Polke Pelle, another volunteer firefighter in the village of Catur Rahayu in Jambi, Sumatra.

“Fortunately he screamed again and we were able to locate him. One of the stronger members of the team dragged him out, and I went on my motorbike to get an ambulance to evacuate him.” 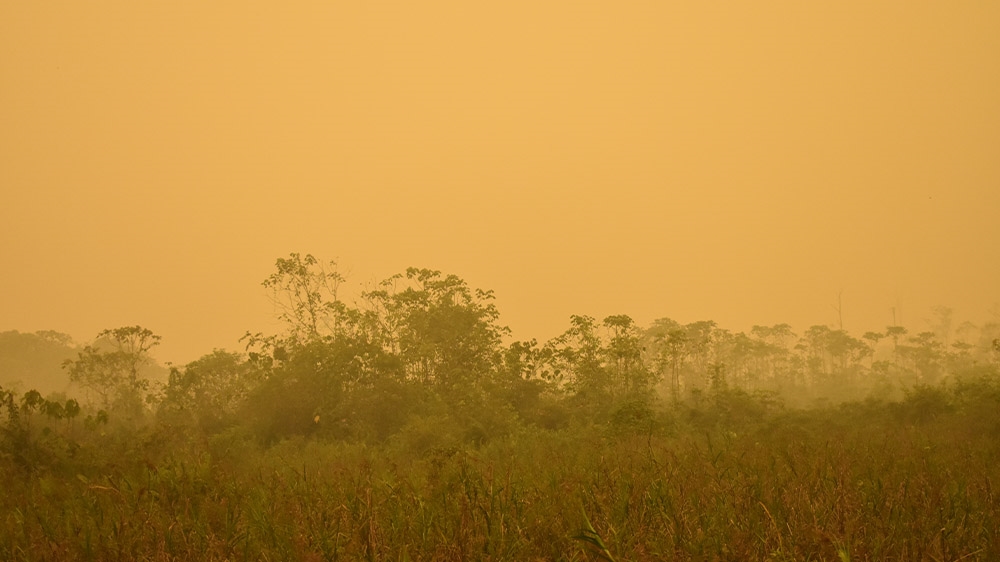 Vast tracts of land in southern Sumatra are ablaze, as plantation owners use fire to clear land. The dry weather has fuelled the fires. [Raymondo/AL Jazeera]

Parts of Indonesia have been ablaze since July blanketing Borneo and Sumatra in a thick toxic haze that spread into neighbouring countries including Malaysia and Singapore this month.

Many of the fires are thought to be the result of plantation owners burning land for the new planting season – a practice that has blighted Southeast Asia for years but is supposed to be outlawed.

“I have told the military and police chiefs to fire whoever fails to tackle the forest and land fires,” he told the media.

Last week, he said that 6,000 troops had been dispatched to the affected areas, reassuring the public that the government had made “every effort” to address the problem.

But in Jambi, local environmental activist, Irmansyah, who like many Indonesians only goes by one name,who works for the non-governmental organisation Yayasan Keadilan Rakyat, said the government response had been underwhelming, and that even face masks were in short supply in rural areas.

The president’s tough talk had also made local officials fearful, people on the ground told Al Jazeera on condition of anonymity worried they would lose their jobs if they took action to protect their communities because such efforts would be seen as admitting that the haze was a major problem.

At the site of some of the worst fires around Catur Rahayu village, it is local people who are on the front lines. There were no members of the military, the police or government agencies in attendance.

“Post-2015, local companies and the government have organised groups of volunteers to fight the fires,” Irmansyah said, referring to the last time the fires were so severe.

“They give them training but don’t provide them with enough firefighting equipment or protection like full-face masks. We also have no idea of the long term effects that being in the haze for such a long period of time will have on the volunteers.” 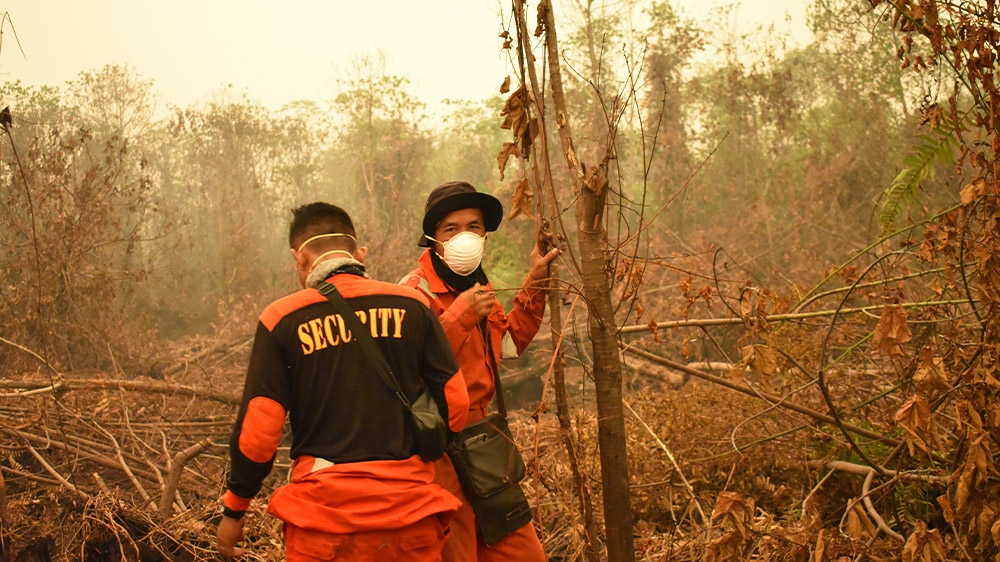 Indonesia’s government has deployed 6,000 troops to help tackle the blazes ravaging parts of Borneo and Sumatra, but many places are reliant on volunteer firefighters who sometimes end up funding the response themselves. [Raymondo/Al Jazeera]

Andre is the head of one such volunteer group originally recruited by the government called Masyarakat Peduli Api (MPA) or “The Fire Care Community”.

Fighting the flames every day is exhausting many of the men, who are mostly local farmers.

“We force ourselves to work, and everyone is so tired,” said Andre. “We can’t split ourselves in half, but we have to help, so we just keep going in.”

The volunteers have had to abandon their jobs in order to help with the firefighting effort and while they received six million Indonesian rupiah ($425) from the government, it has not been enough.

Now they’re using their own money to buy food and fuel for the water pumps.

In order to get an operational licence, plantation companies must agree to help extinguish any fire within a five-kilometre (3.1 mile) radius of their concession. 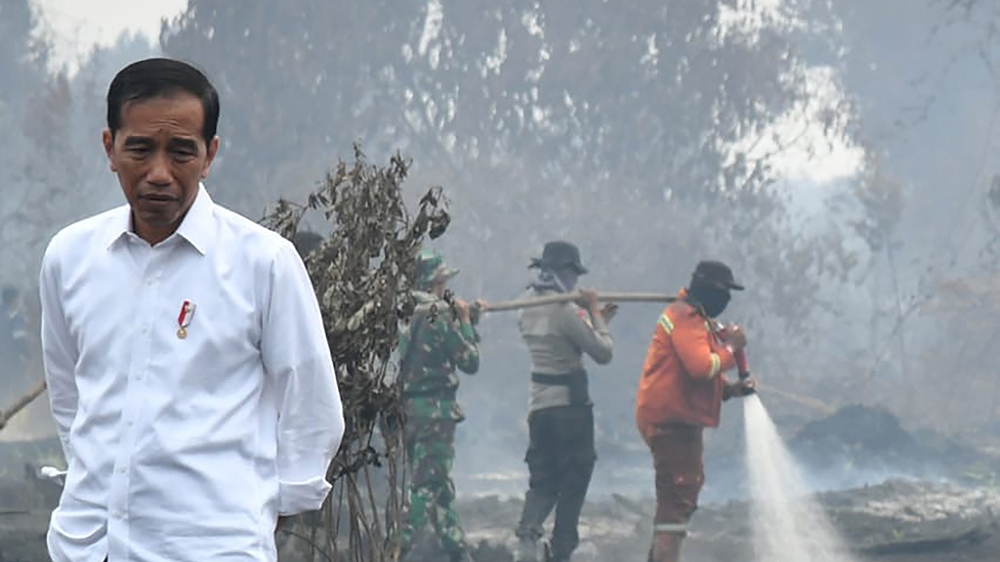 Indonesian President Joko Widodo visited the site of the fires in Pekanbaru in Sumatra last week. He has tried to reassure the public, saying that the government has made ‘every effort’ to tackle the problem. [Indonesian Presidential Palace via AFP]

Environmental activist Irmansyah said some companies sent their own members of staff to help fight the fires without providing them with medical checks and essentials such as oxygen tanks, putting their workers’ health at risk.

One such group of local firefighters work for a plantation company known as PT BBIP and told Al Jazeera they were sent by the company to tackle fires in neighbouring areas at the beginning of September.

All the men in the group usually work as security guards at PT BBIP. The company allowed the men to speak on its behalf.

“We don’t know when we’ll get to go back to work,” said Bosar Pardede, the leader of the group. “At night we sleep in our tent and our company sends us food. But we have been fishing in the canals to get extra protein.”

The fields are separated by a canal system which is meant to stop the fires from spreading, and the men have been fishing for eels and catfish which they fry over a bonfire at night.

Another member of the group, Ambo, said that living on the edge of a burning forest every day was gruelling for the men, who work in 12-hour shifts.

“We get very dizzy and it’s like being drunk,” he said. “But we’re not scared, we’re all in this together.”

Despite the health risks and his recent hospital visit, he said he will continue to go back and fight the fires for as long as necessary.

“I feel traumatised, but then I see my friends chasing the fires,” he said. “When everyone else is going in, how can I not follow them?”

On-off social distancing may be needed until 2022: Harvard study

Mosques close doors in UK to support fight against coronavirus