Residents of Florida on Friday were boarding up windows, stocking up on food, water and petrol in their homes as Hurricane Dorian gained strength and slowly churned towards the United States mainland.

The storm has alarmed forecasters who worry parts of Florida will be walloped by strong winds, a storm surge and heavy rain for an extended period when it makes landfall early next week.

The Miami-based National Hurricane Center said Dorian was expected to continue strengthening and remain an “extremely dangerous major hurricane” as it moves northwest near the Bahamas and approaches the Florida peninsula.

Florida Governor Ron DeSantis urged residents to have at least a week’s worth of food, water and medicine, saying at a news conference in Tallahassee that they should be prepared for a “multiday event”. Florida is under a declaration of emergency.

Two thousand National Guard troops will have been mobilised for the hurricane by the end of Friday, with another 2,000 joining them on Saturday, Florida National Guard Major General James Eifert said. 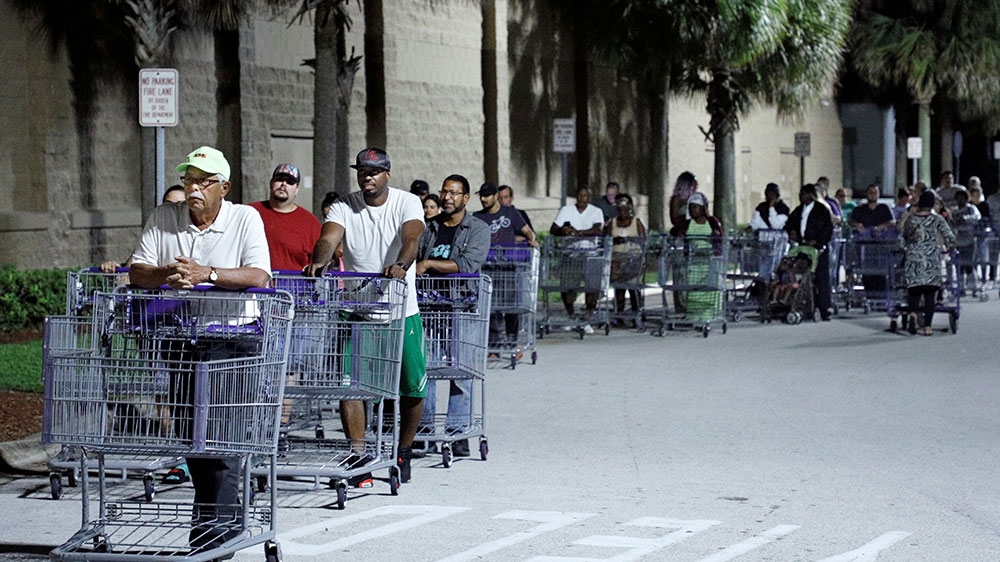 Shoppers wait in a long line for a Sam’s Club store to open before sunrise, as people rushed to buy supplies ahead of the arrival of Hurricane Dorian in Kissimmee, Florida [Gregg Newton/Reuters]

Employees at Conchy Joe’s Seafood in Jensen Beach on Florida’s east coast were boarding up windows and stripping bare the restaurant’s waterfront tiki bar on Friday before heading to their homes to make similar preparations.

“I’m planning on boarding up my house this evening,” said Jamison Weeks, the restaurant’s 38-year-old general manager. “The mood is a little tense, everybody’s a little nervous and just trying to prepare as best as possible.”

Dorian is expected to bring a life-threatening storm surge that raises water levels by as much as 3 to 4.5 metres (10 to 15 feet) above normal levels in parts of the northwest Bahamas, the NHC said in an advisory at 2pm EDT (18:00 GMT). Near the coast, the surge will be accompanied by large and destructive waves.

“Almost everyone has left, or is leaving today,” said Pauline Powell, 26, who was on a family vacation at the Island Seas Resort in Grand Bahama when the storm started barreling towards the area’s pristine beaches.

The Bahamas Ministry of Tourism and Aviation said hotels and resorts throughout that part of the island nation have activated hurricane response programmes, which typically include boarding up beach-facing windows and encouraging guests to leave.

The Grand Bahama International Airport in Freeport will close Friday night and will not open until September 3, the ministry said in a statement.

Dorian began on Friday over the Atlantic as a Category 2 hurricane on the five-step Saffir-Simpson Wind Scale but strengthened to a Category 3 later in the day. It had maximum sustained winds of 115 miles an hour (185 km an hour), according to the latest NHC advisory.

If, as expected, Dorian reaches Category 4 strength over the weekend, its winds will blow at more than 130 mph (210 kph). It is currently moving at a pace of 10 miles an hour (16 km/h), giving it more time to intensify before making landfall.

Forecasters predicted it will be over the northwestern Bahamas on Sunday and near the Florida peninsula late on Monday. It is projected to make landfall in South Florida and then head up through the central part of the state.

“What’s concerning is it’s slowed down. We’re looking at a multiple-day event. We were hoping it would just barrel through and leave,” said Ben Malik, the mayor of Cocoa Beach, about 136 km north of Port St Lucie.

“I’m really worried about the amount of rain we’ll be getting.”

Some petrol stations in Florida have run dry and others have long lines of cars, DeSantis said, adding that the state had eased regulations to allow higher-capacity trucks to transport fuel and to make it easier to bring in fuel from other states.

Petrol prices at the pump are not expected to spike because of the storm, said Patrick DeHaan, head of petroleum analysis at GasBuddy.com.

“There are no refiners in Florida, there’s only a pipeline, and I can’t imagine that would be affected significantly. Fuel is flowing, and that’s the most important factor,” DeHaan said.

Colonial Pipeline, which delivers fuels such as petrol and diesel from the Gulf Coast to markets across the southern and eastern United States, said it was operating normally. It had no plans to shut down ahead of Dorian’s projected landfall.

Florida officials also were making sure all nursing homes and assisted living facilities had generators, and were checking with more than 100 facilities where information about generators was uncertain.

Only one in five Florida nursing homes plans to rely on deliveries of temporary generators to keep their air conditioners running if Dorian knocks out power, a state agency said on Friday, short of the standard set by a law passed after a dozen people died in a sweltering nursing home after 2017’s Hurricane Irma. 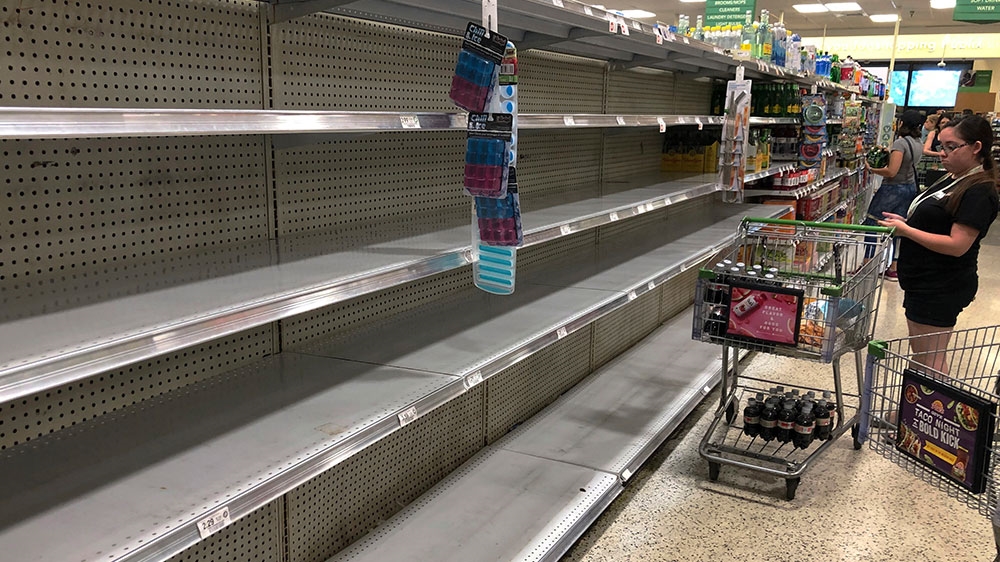 Officials from the Federal Emergency Management Agency, which was harshly criticized in 2005 for its slow response to Hurricane Katrina and its aftermath, briefed Congress on Friday on the steps they are taking to prepare for the storm.

FEMA has begun moving personnel and equipment into Georgia, including trucks and line crews who would help get electricity back up and running if there is a serious service interruption in Florida, according to a Democratic aide in the US House of Representatives familiar with the briefings.

Georgia Governor Brian Kemp has declared a state of emergency in 12 counties in the state.

President Donald Trump on Thursday canceled a planned weekend trip to Poland so he can make sure resources are properly directed for the storm.

Dorian could churn across dozens of launchpads owned by NASA, the Air Force and companies such as Elon Musk’s SpaceX and Jeff Bezos’ Blue Origin.

US closes in on 6 million COVID-19 cases mark

42% Muslims in France harassed at least once: Report