President Donald Trump is expected to join a rally – dubbed “Howdy, Modi!” – in Texas to be addressed by Indian Prime Minister Narendra Modi, who is visiting the United States amid trade tensions between the two countries.

Tens of thousands of Indian Americans and Non-Resident Indians gathered at Houston’s NRG Stadium in Texas on Sunday, even as a large number of people protested outside the venue against India’s actions in Kashmir and other places.

“Will be in Houston to be with my friend. Will be a great day in Texas!” Trump tweeted on Sunday.

To which Modi replied within minutes: “It surely will be a great day! Looking forward to meeting you very soon @realDonaldTrump.”

It surely will be a great day! Looking forward to meeting you very soon @realDonaldTrump. https://t.co/BSum4VyeFI

The event gives Modi, who is facing international criticism over the recent crackdown in Indian-administered Kashmir, a chance to energise his relationship with Indian Americans, a majority of whom are his active political supporters.

Reporting from Houston, Al Jazeera’s Kimberly Halkett said the rally gives Modi a chance to “gloss over” the criticism his government has been facing.

“[It’s] a chance to try and beam across the world not just in India, but in the United States and the international newspapers, and a chance to appear on stage with US President Donald Trump to gloss over much of the international criticism about his nationalist brand of politics,” she said.

Not the first time

It will not be the first time Modi, who heads the Hindu nationalist Bharatiya Janata Party (BJP), has addressed a large crowd in the US, home to 4 million Indian Americans, including about 300,000 in Houston and nearby Dallas, according to a Pew Research Center analysis of US Census data.

Some 19,000 people turned out for a similar event in New York in 2014, and Indian American volunteers living in US suburbs helped run a telephone blitz of voters in India in the runup to his May reelection campaign. 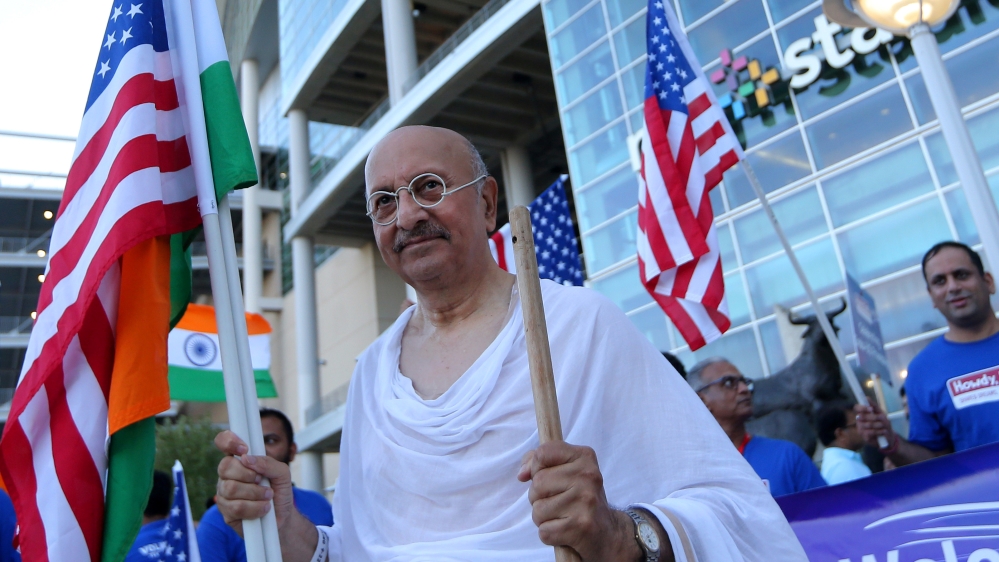 Houston is a rare Democratic stronghold in Republican-dominated Texas and serves as the economic anchor of a state that will be critical to Trump’s 2020 reelection bid.

Polls show tepid support by Indian-American voters, some 75 percent of whom voted for his Democratic rival, Hillary Clinton, in 2016.

When Donald Trump stays silent in the face of religious persecution, repression and brutality, the dangerous message this sends to autocratic leaders around the world is: “Go ahead, you can get away with it.” https://t.co/H4jKDadFz8

But organisers of the “Howdy, Modi!” event say Trump can expect a receptive audience.

“Trump is completely welcomed by the community,” said Preeti Dawra, a spokeswoman for the Texas India Forum that organised the event.

“His presence is an indication of his support and endorsement of the strengthening of India’s relations with America. This event is about strengthening those ties.”

India and the US have been talking for months to try to resolve trade issues.

In June, the Trump administration accused India of imposing a wide range of trade barriers, and the US ended preferential trade deals with India. In return, India levied higher import duties on US goods.

Halkett said the two leaders will share the stage “not only for the diplomatic and PR aspect, but also for economics”. “They are trying to score a trade deal in advance of the UN General Assembly,” she said.

Protest against the visit

When Trump and Modi meet at the United Nations later this week, they are also expected to discuss the situation in Indian-administered Kashmir.

Last month, the Indian government stripped the disputed Himalayan region of its semi-autonomy and launched a security crackdown, which is in its second month. Thousands of people have been arrested in the region.

Thousands of people in Houston and other American cities are protesting over the Kashmir lockdown and other allegations of human rights violations against the Modi government. 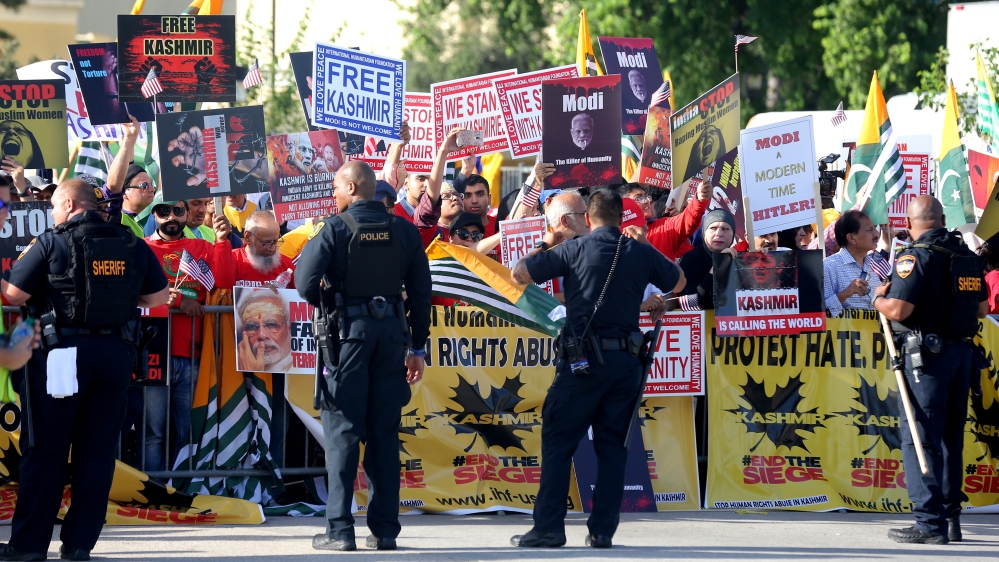 “The pluralist and secular constitution of India has repeatedly come under a grave threat by the actions of Prime Minister Modi’s government for over five years,” said Syed Afzal Ali, national vice president of the Indian American Muslim Council.

Another group, Hindus for Human Rights, said atrocities against the minorities in India cannot be tolerated in the name of their faith.

“As Hindus, we feel like the atrocities happening in India … is all being done by a Hindu extremist government in the name of our beloved faith, Hinduism. It is our absolute religious, moral and human obligation to stand up and be counted on the side of history that said: ‘No, not in our name,'” said Sunita Viswanath, the co-founder of the group.

Al Jazeera’s Kimberly Halkett said there were tens of thousands of protesters in Houston.

“To give you sense of how tense things got here … our photographer got his media credentials yanked, his camera was pulled away. This is something the organisers of the event really don’t want to have broadcast around the world,” she said.

“What they want is the appearance of Donald Trump on stage alongside Modi. They want this diplomatic win.”

Climate SOS: Five-year period ending 2019 to be hottest on record

UK, Europe journalists say MSR’s arrest is an attack on all media