Tens of thousands of people are expected to gather in Houston, Texas, on Sunday to hear Indian Prime Minister Narendra Modi and US President Donald Trump address a rally dubbed “Howdy Modi”.

Organisers say more than 50,000 people – many from the Indian-American diaspora – have registered for the event, which the White House labelled “a great opportunity to emphasise the strong ties between the two countries” and “reaffirm the strategic partnership between the world’s oldest and largest democracies”.

The rally, hosted by the Texas Indian Forum, is set to kick off around 8:45am local time (13:00 GMT) with cultural performances before Modi and Trump take the stage at NRG Stadium around 10:00am (15:00 GMT).

“There is unprecedented synergy between our region and the aspirations of a ‘New India’ that Prime Minister Narendra Modi represents. The American dream shares many similarities with emerging Indian dream, and an event of this scale suggests an opportunity to build bridges across two great democracies,” Jugal Malani, the event’s chair, said in a statement announcing the event.

“It’s going to be amazing because Prime Minister Modi is an icon,” Swapan Dhairyawan, president of the Indo-American Chamber of Commerce, was quoted by ABC 13 Houston as saying. “He’s an icon. And we are so excited to welcome him to H-town and Houston being the hub of oil and gas.”

But human rights organisations are also expected to draw more than 15,000 people to counter-rallies outside the stadium, aiming to raise awareness of the alleged human rights violations in Indian-administered Kashmir, as well as other parts of India, including Assam state.

“Most of us try to defend human rights violations no matter where they happen,” said Mohammed Nasrullah, of the International Humanitarian Foundation, one of the main organisers of the protests.

Last month, India’s Hindu nationalist government revoked Article 370 of the country’s constitution, which guaranteed special rights to Indian-administered Kashmir. New Delhi also imposed a communications blackout and deployed thousands of additional troops to the disputed territory. Hundreds of people have been wounded in protests in parts of the Muslim-majority state, while thousands have been detained.

Michelle Bachelet, the UN human rights chief, said earlier this month that she was “deeply concerned about the recent actions by the government on the human rights of Kashmiris”.

She specifically pointed to the “restrictions on internet communications and peaceful assembly, and the detention of local political leaders and activists”.

In India’s northeastern Assam state, nearly two million people were recently excluded from a list of citizens. This includes a number of Bangladeshi refugees, both Muslims and Hindus, who fled to India more than 40 years ago during their country’s war of independence. Those excluded have 120 days from the end of last month to prove their citizenship.

Amnesty International last month urged the Indian government “to ensure that it is not depriving a person of his/her nationality on arbitrary or vague grounds, by diminishing procedural due process, or if such deprivation stands to render a person stateless”.

“Most Americans don’t know where Kashmir or where Assam is, so our number one goal is [raising] awareness and educating the local community of this issue and what the prime minister of India, Narendra Modi, has been doing during this term.”

Sunita Viswanath, cofounder of Hindus for Human Rights, urged other Hindus to “wake up, and find out what’s going on” in India.

“Hindus in the world, Hindus in America are not awake to the horrors taking place,” she told Al Jazeera. “I do not believe that most of the Hindus that are supporting Modi really, truly, understand the extent to which the [Hindu nationalist] forces are aligned with fascism.”

Viswanath, whose organisation is part of the Alliance for Justice and Accountability, which consists of Hindu, Muslim, Dalit, Sikh and Christian groups, said the protest was not just against Modi, but also Trump.

“Both are nationalist, both suppress minorities in their countries, both seem to have no regard for law and order process. Both seem to be absolutely destroying the fabric of very important democracies in the world,” she said.

Over 20,000 Kashmiris and Sikhs have come together for #GoBackModi campaign in Houston against PM Modi’s #HowdyModi event and have dubbed him as the “Face of Indian terrorism”. pic.twitter.com/prf5v3duNb

Dozens of US politicians – at the national, state and local level – are also expected to attend Sunday’s event, according to Indian media.

The rally comes as the 2020 presidential race in the US heats up. Trump may be looking to gain support from an estimated four million Indian Americans in the US, especially after surveys showed that more than 80 percent of those who identify as Indian American voted for his rival, Hillary Clinton, in 2016.

Presidential candidates seeking the 2020 Democratic nomination include Tulsi Gabbard, who is a Hindu Samoan American and Kamala Harris, whose mother was Indian American.

Neither candidate is expected to attend Sunday’s event.

Gabbard, who said she had previous commitments, welcomed Modi to the US on Twitter.

Gurpatwant Pannun, who is the legal adviser of the Sikhs for Justice group, warned US politicians against fostering close relationships with the Modi government.

“I really want to let US lawmakers know that this is a time that they should not trade the economic benefits with the blood of the minorities,” he said before Sunday’s event.

Modi, of the Bharatiya Janata Party (BJP), arrived in Houston on Saturday and met leaders of the energy sector, according to Raveesh Kumar, the spokesman for India’s Ministry of External Affairs. After Sunday’s address, Modi will head to New York City for the United National General Assembly.

Despite Trump and Modi’s apparently warm relations, there have been tensions between the two countries over trade and tariffs.

Reuters News Agency, citing unnamed sources, reported on Saturday that Indian and US officials were expected to discuss a limited trade deal that Trump and Modi may sign during the UN event next week. 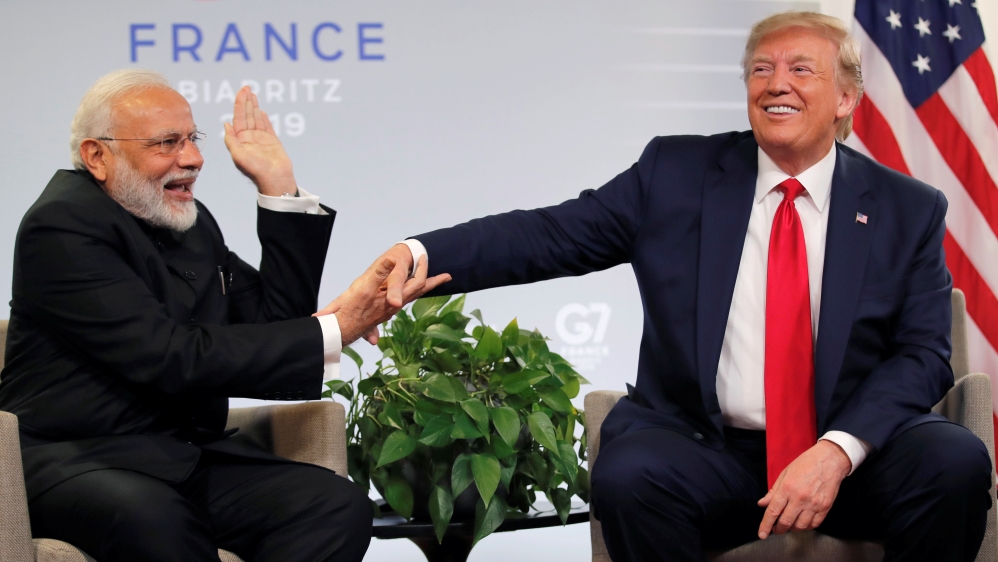 Trump and Modi met for bilateral talks during the G7 summit in Biarritz, France, on August 26 [Carlos Barria/Reuters]

Indian Foreign Minister Subrahmanyam Jaishankar said at a news conference this week that officials from the two countries have been engaged in talks for months.

“My expectation is that some of the sharper edges, they would be addressed in some forms in the not too distant future,” he was quoted by Reuters as saying.

The White House said Sunday’s event serves as an opportunity to “discuss ways to deepen [India and the US’s] energy and trade relationship”.

Details of the possible deal have not been officially released, but the New York Times noted that any agreement would likely be limited to only a few sectors.

PM to hold meetings with US lawmakers, diplomats & chief of Amnesty International today

China rejects US statement on CPEC

Shakira’s net worth is THIS whopping amount of money: Find out

Gunman kills eight in US city of Indianapolis: police