Hong Kong’s High Court has rejected a bid by pro-democracy legislators to temporarily suspend a controversial new mask ban as thousands of activists hit the streets again in defiance of the regulation.

The legal challenge brought forward by 24 legislators was dismissed on Sunday in a second attempt to overturn the rule after an initial bid failed on Friday night just hours after leader Carrie Lam announced the ban.

But the court agreed to expedite a more substantial hearing of the case for the end of October.

“We have seen a very rare move made by the high court today, which is to expedite the substantive hearing of our case to be heard sometime in the next month, possibly earliest is the 20th of October or slightly later,” said pro-democracy legislator Dennis Kwok.

After four months of huge and increasingly violent protests, Lam invoked a sweeping colonial-era law on Friday allowing her to make “any regulations whatsoever” during a time of public danger.

She used it to ban masks, which protesters have used to hide their identity or protect from tear gas , and warned she would use the powers to make new regulations if the unrest did not abate. 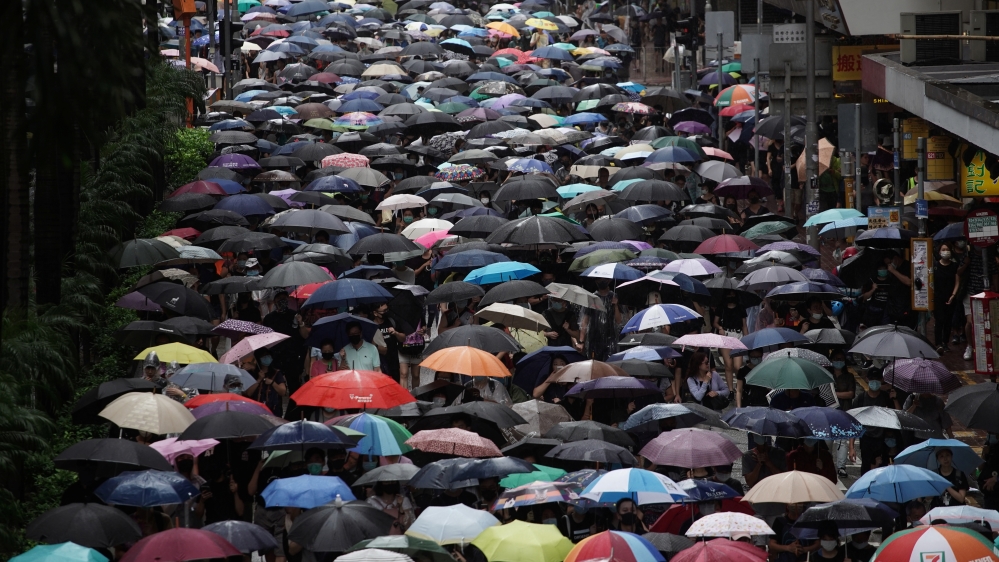 Al Jazeera’s Sarah Clarke, reporting from Hong Kong, said the case was filed because the “pro-democracy lawmakers believed the ban was unconstitutional and infringed on the Hong Kong’s mini constitution, which is the basic law.

“That particular case has been rejected, but there is still an attempt by these pro-democracy legislators to have a judicial review to have this particular anti-mask law dumped altogether,” she added.

The mask ban that went into effect at midnight on Friday triggered an overnight rash of widespread violence and destruction in the semi-autonomous Chinese territory, including the setting of fires and attacks on an off-duty police officer who fired a live shot in self-defence that wounded a 14-year-old boy.

Two activists failed to obtain a court injunction on Friday against the ban on face coverings, which will need to approved, however, by the legislative council which resumes session on October 16.

Opposition to the ban

As the ruling was being delivered on Sunday, two unsanctioned rallies kicked off on both sides of Victoria Harbour, with thousands of masked protesters gathering in torrential downpours.

“There are number of rallies planned for Sunday,” said Al Jazeera’s Clarke. “We do expect thousands to gather again at the point where we are, which is Caueseway Bay, which we expect to be probably one of the larger marches in Hong Kong against the anti-mask bill.”

“There are people marching with masks on, showing their opposition to the ban.”

“The anti-face mask law is the first step,” Hosun Lee, a protester in Causeway Bay, told AFP news agency, saying he feared more laws under the emergency order were on the way.

Hong Kong has been battered by a summer of rage as widespread public anger seethes over Chinese rule and the police response to protests.

The rallies were ignited by a now-scrapped plan to allow extraditions to the mainland, which fuelled fears of an erosion of liberties promised under the 50-year “one country, two systems” model China agreed ahead of the 1997 handover by Britain.

On Friday night after Lam announced the face mask ban, masked protesters went on a rampage in dozens of locations, trashing subway stations and businesses with mainland China ties.

The city’s subway system, which carries four million people daily, was shut down entirely on Friday night and throughout Saturday, bringing much of the metropolis to a halt.

Major supermarket chains and malls announced they were closing leading to long lines and panic buying as residents stocked up on essentials.

Thousands of masked protesters still came out onto the streets throughout Saturday despite the mask ban and transport gridlock, although the crowds were smaller than recent rallies.

On Sunday, the subway operator said 45 stations would open but 48 remained shuttered, many of them in the heart of the city’s main tourist districts as well as those areas hit hardest by the protests and vandalism.

Online forums used by the largely leaderless protest movement to organise were encouraging protesters to hold an unsanctioned rally in the city’s Victoria Park later Sunday.

But with most of the stations in that area of the city closed it was unclear if they would be able to muster decent numbers.

“It’s a very clever tactic on behalf of the police because they are demobilising the groups so people can’t get to the protest locations,” said Al Jazeera’s Clarke.

Lam has defended her use of the emergency powers and says she is willing to make more executive orders if the violence continues.

“We cannot allow rioters any more to destroy our treasured Hong Kong,” Lam said in a video statement on Saturday.

At least 4 killed in Kansas City bar shooting in US: Report