The transit suspension, which began after protesters again fanned out across Hong Kong on Friday, ground the semi-autonomous trade and financial hub of 7.5 million to a halt on Saturday.

“From MTR to EmptyR,” tweeted activist Joshua Wong, a key player in the 2014 protests and a vocal proponent of the past four months of demonstrations.

The latest unrest began with large crowds of office workers initially blocking roads in the heart of the central commercial district.

Police used tear gas in multiple locations to disperse protesters who had taken over roads.

Lam on Saturday described the most recent clashes as a “very dark night for Hong Kong” that made “society semi-paralysed”.

“The extreme violence clearly illustrated that Hong Kong’s public safety is widely endangered,” she said in a pre-recorded television announcement on Saturday, adding that the violence justified her invocation of emergency powers.

MTR Corp, which operates the public transport network that serves about five million passengers each day, said protesters had set fires at stations on an empty train and injured two staff on Friday night.

“As we are no longer in a position to provide safe and reliable service to passengers in the circumstances, the corporation had no choice but to make the decision to suspend the service of its entire network,” the company, known for operating one of the world’s most efficient rail systems, said in a statement.

In the northern district of Yuen Long, a police officer opened fire overnight when he was surrounded while in his car and attacked by protesters, with a petrol bomb exploding at his feet, authorities said.

“A large group of rioters attacked a plain-clothes police officer in Yuen Long district. The police officer fell onto the ground and was beaten up by the group. Facing serious threat to his life, he fired one shot in self-defence,” the police said in a statement.

Also in Yuen Long, a teenage boy was shot and wounded by a live round, the South China Morning Post reported, citing a medical source.

It was not immediately clear if that round was linked to the plain-clothes officer who opened fire.

Hospital authorities said 31 people were hurt in Friday’s protests, two of them seriously.

The United Nations High Commissioner for Human Rights Michelle Bachelet said on Saturday that she has called for an independent investigation into the “acts of violence including shooting” committed during the protests.

She added she “strongly condemned” the violence, saying “those responsible should face due process”.

“I reiterate my call on Hong Kong authorities and the people of Hong Kong to engage in genuine and transparent dialogue that can really contribute to a meaningful outcome of this situation,” she said.

Friday’s demonstrations erupted hours after Lam invoked colonial-era emergency powers – last used more than 50 years ago – to ban face masks at rallies, which demonstrators use to conceal their identities. The ban officially went into effect on Saturday.

Since June, Hong Kong has been engulfed in anti-government protests triggered by a since suspended bill that would have allowed the extradition of accused individuals to mainland China for trial.

The protests have now morphed into a wider pro-democracy movement.

The anger has been fueled by officials’ refusal to address protesters’ demands for an independent inquiry into alleged police brutality in suppressing the protests, amnesty for all those charged with offences stemming from participating in protests, and a retraction of police claims that protesters are guilty of rioting.

Critics say Lam’s invocation of emergency powers was a major step towards authoritarianism for Hong Kong, which has been governed by China under a “one country, two systems” framework since British colonial rule ended in 1997.

Beijing has hailed the ban as “extremely necessary”.

Kris Cheng, the editorial director of the Hong Kong Free Press, said protesters are not that concerned with the ban, which carries a penalty of up to a year in prison and a fine of $3,200.

“What’s more worrying is … that there may be further measures for the government, including extending detention hours to 96 hours, including extra funds to police, including banning weapons, banning protesters to hold certain kinds of weapons,” Cheng told Al Jazeera.

“So this may be the only the first step for the government to use the emergency law to set up all of the new laws they want to enact.” 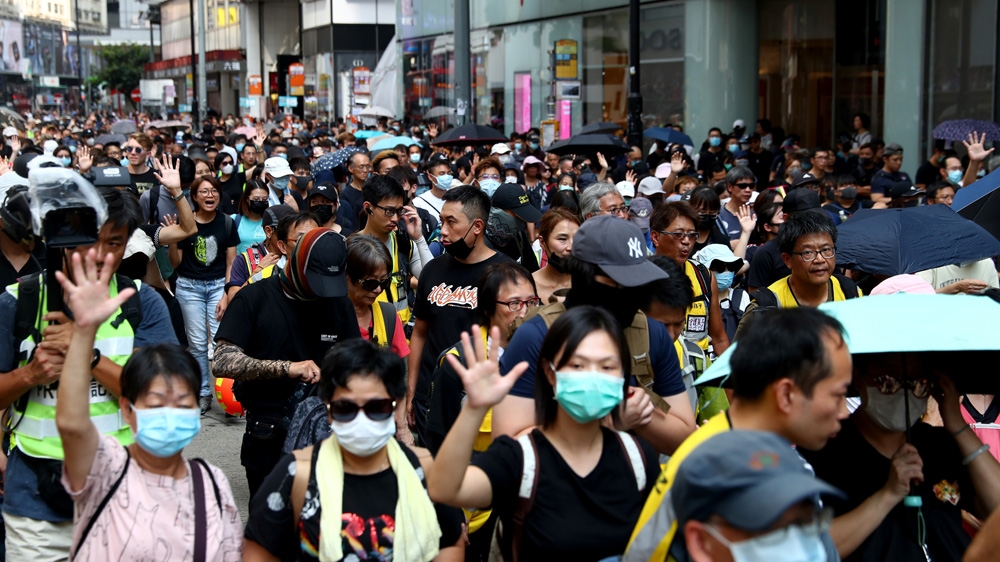 Two activists filed legal challenges late on Friday against the ban on the grounds that it would instil fear and curtail freedom of assembly, but a court denied their request for an injunction.

More demonstrations were planned across Hong Kong on Saturday, with several protesters defying the ban and wearing face masks at a demonstration in the Causeway Bay district in the early afternoon.

In light of the public transit suspension, which prevented many from travelling, Cheng said several protesters on social media said they were taking a day of rest.