Hong Kong – Tens of thousands of people descended upon the Hong Kong government headquarters on Saturday night to mark the fifth anniversary of the Umbrella Movement, the first ever homegrown pro-democracy movement in the semi-autonomous Chinese city.

The 79-day sit-in laid siege to the government office compound and took over parts of the downtown business district in the autumn of 2014, but failed to win any concession from Beijing on the right to free and fair elections.

Defeated though not discouraged, they returned to show the passage of time has only bolstered their fighting spirit.

“Every movement gives rise to the next. All along what we’re fighting for is true democracy,” said Benny Tai, a law professor who is one of the three co-founders of the movement inspired by Occupy Wall Street – only to surpass it in both length and scale. 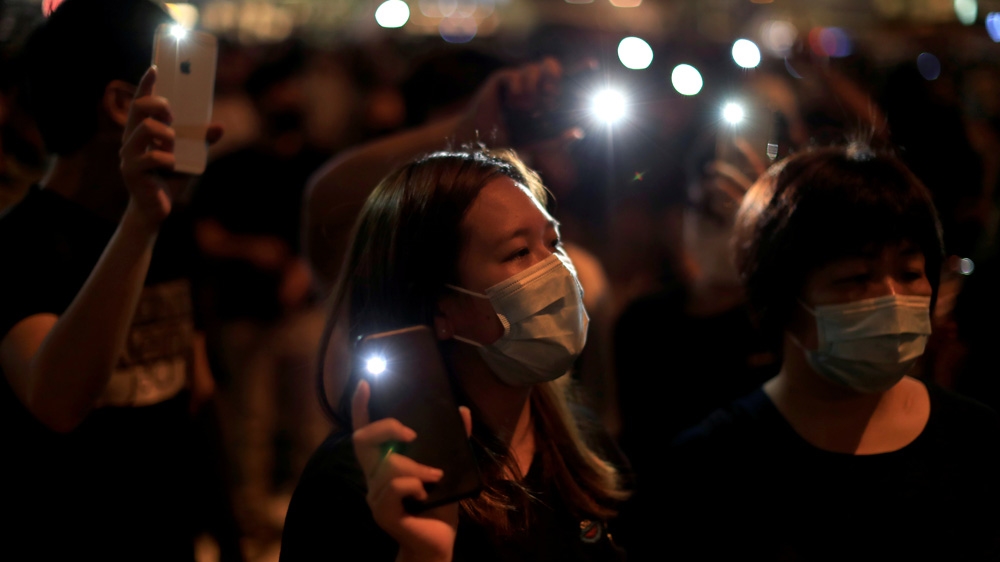 This year, the anniversary has taken on a more poignant salience.

The past 16 weeks saw Hong Kong in the throes of anti-government protests that have evolved into a new wave of pro-democracy movement – so much so that many who sat on the sidelines five years ago turned out in droves on Saturday night.

“Back then, the goal wasn’t clear to me. But over the years and especially the last few months, the problems with our government have bubbled up,” said MJ Fung, 31, a flight attendant.

For Fung and many others, the last straw came this spring when government officials pushed ahead with legislation that would allow anyone in the city to be sent for trial in China, where courts are opaque and the right to a fair trial cannot be ensured.

Three months of million-strong peaceful marches and violent clashes with police finally forced the government to withdraw the legislation recently.

Yet, the fight rages on for an independent inquiry into alleged police brutality in suppressing the protests, a blanket amnesty for all those charged with offences stemming from participating in demonstrations, and a retraction of a police claim that protesters are guilty of rioting – a charge that carries a heavy prison sentence.

Most important of all, the protesters are pressing for a full democracy, as they did during the Umbrella Movement.

While that movement’s lifeblood was predominantly university students, who stood their ground, literally, in thousands of tents for months, the current campaign has been more agile and diffuse. Instead of choking downtown, it has spread to many neighbourhoods all over the city.

“The Umbrella Movement has taught them many lessons, including the importance of solidarity and how to keep the society vibrant by allowing a wide spectrum of people to participate,” Dixon Ming Sing, an associate professor at the University of Science and Technology, who investigates comparative political culture, told Al Jazeera. 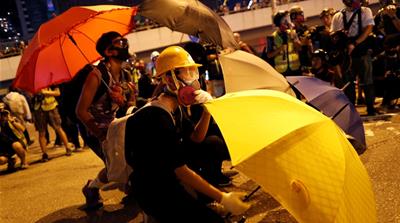 Frequent skirmishes between the police and the protesters have also exposed the failings of Hong Kong’s leaders, who remain in power solely on Beijing’s blessing rather than the people’s consent.

Moreover, widespread outrage against police brutality and sympathy for the mostly peaceful protesters has helped sustain – and even broaden – public support for the current fight.

Michelle Tsang, 52, wiped off tears as she talked about how young protesters are being smeared by the authorities as rioters.

“I didn’t know any better back then,” said Tsang. “But this fight is worth fighting.”

On Saturday night, the public park outside the government headquarters was packed to standing room only, and crowds spilled into the surrounding roadways.

Some of those who gathered tossed Molotov cocktails over the barricade into the government office compound and shattered office windows with pavement bricks.

Riot police fired tear gas and water cannon to scatter the crowds. Yet, time and again, Hong Kong’s protesters have made good on their vow five years ago: “We’ll be back.”

That’s because the current fight is only one of the battles in a drawn-out war, said Joshua Wong, the student leader who was the best-known face of the 2014 movement.

Barely two months after serving time for his involvement, Wong travelled to Germany and the United States to lobby for international attention on Hong Kong’s fight.

“Precisely because there’s nowhere for us to turn, the only way to go is forward,” said Wong. “We need to let the world know about Hong Kong people’s perseverance.”

Coronavirus is ‘under control’ in Germany: Health minister